This week’s Nashville is mostly about Deacon’s father showing up in town, which is important and resonant and elicits some very fine performances from Charles Esten and Ronny Cox. I promise, we’ll talk about that a lot in a moment.

But did you see Avery’s face (!) when Juliette (!!) returned from Club Hell to find him disrobing Alannah (!!!) on the couch?!?

Read on for the highlights of “The House That Built Me.” 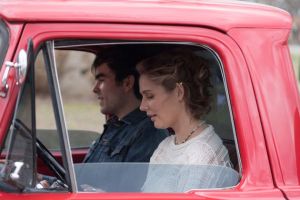 NOPE, NOPE, NOPE | It’s fitting that I’m going to continue my tradition of giving Scarlett very little attention in this recap, because she continues her ridiculous/borderline dangerous obsession with pushing PTSD victim Sean too far — only this time it’s about spending time with his family and it ends with him holed up in a bathroom with a gun after learning about a friend’s suicide… which still isn’t a wake-up call that maybe Scar should call in a professional. Instead, she chatters at him about how nice the breeze feels on his face and later smiles at his wife when he seems to come around a little. Where is that horse center boss that used to yell at Scarlett every episode? I could use a tag-team partner here, and that woman was SCARY.

#ALANNAHTOO | While Will, Avery and Gunnar bemoan the fact that they’re getting bumped off bills thanks to Alannah’s absence, the purple-haired one is getting all excited about the prospect of opening for The Lumineers on tour. And Brad is full of promises like that… until she makes it clear, after a night of near-Weinsteining on his part, that she’s not interested in any hanky-panky. All of a sudden, the opening gig for The Lumineers is off, and she’s irked. That’s when Avery suggests that maybe they should write songs together… a choice that doesn’t sit well with Gunnar and Will. 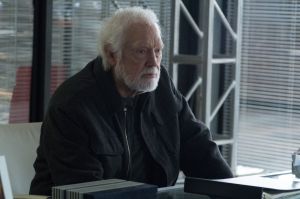 THE GINS OF THE FATHER | I know I have given Deacon a hard time here about his vest choices in the past, but he looks very nice as he wears one while getting ready to play a live radio gig at a nearby college. (Daphne and Maddie, however, tease him mercilessly about it.) At the show, Deke plays “Like New,” which we heard in Seasons 2 and 4, and I like it a lot. An old man watches from the back of the auditorium and approaches while Deacon is signing autographs after the performance. The man wants to get coffee or something, but Deke seizes up, grabs his guitar and his girls, and leaves. “Who is that?” Maddie wonders. “No one,” Deacon huffs.

Of course, it is someone worth mentioning: Deacon’s father, who was a mean drunk and left Deke, his mother and Beverly when Deacon was about 17. Maddie feels like her dad should give his father an opportunity to state his case; though Deacon grumbles that he’s not interested, he somehow winds up at the old man’s motel, wondering what he wants.

The gist of it is that Gideon Claybourne lost his home in Corpus Christi, Texas, during Hurricane Harvey, and he’s looking to settle down somewhere new. He’s not asking for anything from Deacon, but Gideon does want his kid to know that he’s stopped drinking. Deacon is unmoved, remembering his pop as a physically abusive person on whom Deacon once had to pull a shotgun. “I understand that’s how you see it,” Gideon says, sadly. “That’s how we see it, because that’s how it was!” Deacon replies.

DADDY’S HOME | When Deacon tells his daughters about Gideon’s arrival, they can’t understand why he’s allowing his own father to be essentially homeless. But when he snaps a little at them, they stop asking. That doesn’t mean, however, that Maddie heeds his words. So she visits her grandpa and brings him to Highway 65, where he tells Deacon why he left all those years ago: “You were becoming me, and whatever else I did, I wasn’t gonna let that happen.” Deacon scoffs angrily. “Yeah, well, it did anyway,” he says. But Gideon gets choked up as he disagrees, saying that if they were that similar, his son wouldn’t have all of the success he’s had or “all these people who love you.”

Next thing we know, Deacon brings Gideon home, surprising Maddie and Daphne. “Girls, this is your grandfather,” he says, a little warily but a lot less mad than earlier in the hour. Daphne hugs the older man. 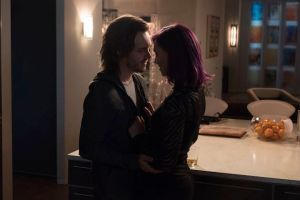 THE RECKONING | Now, back to that thing I mentioned earlier. Avery and Alannah write a song together, and they’re so into how cute they are as they recite the lyrics that I would do just about anything to stop their schmoopy Dr. Seuss bit. But then Alannah climbs on Avery and starts wiggling, and then they’re kissing…but it comes to a quick stop as he glances past her torso… then the look of horror that crosses Avery’s face as he hastily tugs down Alannah’s shirt is DELICIOUS. It shall sustain me for quite some time.

Because Juliette has arrived home after escaping The Movement for Coherent F—kery, only to find her husband making out with one of Jem’s Holograms, and she is not pleased.