Will we meet the Whisperers? Will Negan rot behind bars? Will Maggie strike back at Rick? Oh yeah, TVLine had lots of questions going into Angela Kang‘s first interview as showrunner of The Walking Dead. And, while the longtime writer for the series was always careful not to give away too much — there is such a thing? — she did drop just enough hints about Season 9 to make it sound intriguing. Read on and see if you agree. 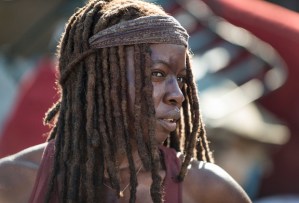 TVLINE | Let’s start with the time jump. Will it be two years, like the one between “All Out War” and “A New Beginning” in the comics?
It’ll be a good time jump — big enough that the world has changed around our characters. We’ll see some new looks and new feels to the show, and there will be more instances of man-made things breaking down and nature kind of taking over. [Our survivors] will also be using more hand weapons, because there’s just not enough ammo.

TVLINE | Is it safe to infer from the Season 9 poster that the show is headed to Washington, D.C. — and finally going to give us some answers about the mystery helicopter?
I don’t want to spoil too much for the fans, but there are some interesting things coming up.

TVLINE | C’mon, let’s spoil something for them. How would you describe the arc of Season 9? If Season 8 was a non-stop battle for Rick and the gang, Season 9 is… what?
It’s a new chapter for them. Now we’re more looking at how people move on and building for the future. People are thinking about what it means to be a civilization.

TVLINE | Are we talking in particular about Rick here, since at the end of Season 8, he chose not to kill Negan in hopes of ensuring there’s “something after”?
Yeah, after he made that unexpected decision, he’s gotten to a place where the goal is no longer just to survive. Now he wants to build the future that Carl envisioned. So he starts the season in a place of relative peace. But this being The Walking Dead, there’s still danger at every turn. 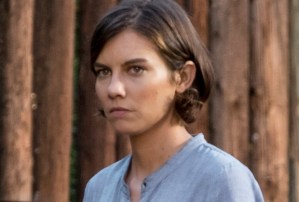 TVLINE | Is some of that danger from Maggie? Or will her anger over Rick’s decision to spare Negan have cooled since the Season 8 finale?
We’ll get into that. When we start off, life is good for Maggie. But Negan still lives in her mind, and [the fact that Glenn’s murderer wasn’t put down] weighs on her. So she has to figure out what she has to do to set that right for herself.

TVLINE | Speaking of Negan, how does he fare behind bars? Since he doesn’t have Carl to talk to like he did in the comics, it seems like it would be mind-numbingly boring.
That’s part of the story — [incarceration] being mind-numbingly boring, especially for someone like Negan who’s used to being in a position of leadership. What does that do to him? The community thinks of him as sort of the monster in the basement.

TVLINE | Don’t we all?
[Laughs] But I think he’ll surprise fans.

TVLINE | What about the Whisperers? Now that the show is introducing characters who are involved in their story in the comics, they’ve got to be coming, right?
All I’ll say is there are some really exciting things in store for fans of the comics.

What do you think, TWD viewers? Are we getting the Whisperers in Season 9? Can you imagine ever seeing Negan as anything but the villain who bludgeoned Glenn and Abraham to death (for starters)? Hit the comments.