Who is Blindspot‘s new troublemaker? Who’s returning to 12 Monkeys? Will Blue Bloods engagement be arrested? Will Reverie romance be rocky? Read on for answers to those questions plus teases from other shows.

Any early word on Blindspot Season 4? — Carly
Jane — er, Remi — won’t be the only threat to the FBI when the NBC drama returns in the fall. The series is currently casting the role of Dolan, who is described as a “tough, grizzled and wily” underground fixer. Set to recur in the first half of Season 4, Dolan “specializes in knowing how to get things done” and will become a crucial part of an illicit criminal enterprise that puts the FBI team in danger.

Anything on Legends of Tomorrow? —Diane
I think I have one last bit left from my most recent interview with EP Phil Klemmer. Having previously discussed Constantine’s living arrangements as well as the threat of team infighting, he also said that this is on the Season 4 wish list: “We’ve never actually figured out the world of the Time Bureau, so I want to actually take another swing at that.”

Do you think there’s a chance another castmate might be joining the girls in The Fosters‘ spinoff? –Eddie
Executive producer Joanna Johnson hopes that the whole family will appear on the spinoff in some capacity. Outside of the Fosters clan, Beau Mirchoff will return as Eliza’s older brother Jamie, who hit it off with Callie — but troubled little bro Carter probably won’t. “We have a huge new cast, and we’ve got a lot of stories that we want to tell,” Johnson explains.

Pretty worried about how Riverdale‘s Archie will do behind bars next season. Anything you can tell us? —Danny
You may be concerned for Archie’s well-being, but KJ Apa sure isn’t. “Archie’s a tough nut, I think he’ll do OK in prison,” Apa ventured during our recent Q&A. “I guess it depends how gnarly these Riverdale prisons are. I want him to get a whole lot of tats, I want him to join a gang… I want all of that. I didn’t think we could get darker with him, but you keep getting surprised by these writers.” 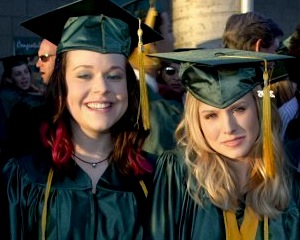 Any scoop on iZombie? –Mandy
After getting a bevy of Veronica Mars alums (Jason Dohring, Enrico Colantoni and Francis Capra included) to appear on the CW series, there’s still one on showrunner Rob Thomas’ wish list: “I’d love to get Tina Majorino,” he tells TVLine. “We did offer her one role, but it wasn’t her cup of tea, which I totally got.” As for Kristen Bell, who previously furnished a voice cameo, “If we shot in L.A. [versus Vancouver], Kristen would do us a solid and do the show,” Thomas says. “But she’s got two young daughters and lives in Los Angeles and has her own full-time gig [on The Good Place]. That’s asking a bit too much from her.”

Any info on the fourth and final season of 12 Monkeys? Will we see Ramse again? –Katie
Executive producer Terry Matalas confirms that we will see Cole’s former BFF again — and we can tell you that his appearance comes about in surprising fashion. 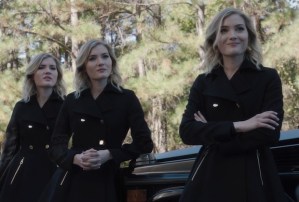 I’d love any spoilers on The Gifted, please! —Ash
If you felt the Frosts were a matching three-pack of Stepford mutants, Season 2 will explore their distinct deviations. “I’m looking forward to getting to know the sisters more – especially because they each have very different personalities,” says Skyler Samuels, now a series regular. “It will be fun to see them go off on their own and develop a bit more. And also, we’re insane! Like, we are crazy and capable of anything, and a little ruthless. Week to week, you never know what the Frost sisters are going to do. We have some wild things ahead.”

When does the summer season of The Last Ship begin? —Shylock
Hopefully it will as usual be a summer season — but thus far I’m hearing nada on a timetable.

Who is Pia Mia playing in CBS’ Happy Together? —Rico
In the new fall sitcom — which stars Damon Wayans Jr. and Amber Stevens West as marrieds who suddenly find a pop star named Cooper (Neighbours’ Felix Mallard) crashing in their suburban home — the Guamanian singer/model will guest-star as Rylie, a celeb that Cooper brings home one night. 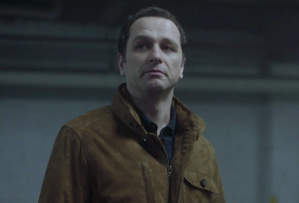 Any scoop on The Americans‘ final season? — Danielle
Well, the FX spy drama obviously finished airing since the sending of your email, but we did get exec producer Joe Weisberg to address one burning question left unanswered by the finale: Whatever happened to Philip’s long-lost son Mischa? Last we saw back in Season 5, Mischa was living with Philip’s brother in the USSR, never having met his father. But with Philip and Elizabeth escaping back to Russia in the finale, Weisberg thinks there could be a father-son reunion in the works: “Presumably, if Philip connects with his brother, he’d find out about that. And that would definitely be an interesting dinner for him and Elizabeth!”

Anything new on Walking Dead Season 9? —Nick
You betcha. Besides Yumiko and Magna, the future Alexandrians TVLine previously told you were being cast, the show is adding to the mix another character that, from what I’ve gleaned, doesn’t sound like anyone from the comics. For one thing, he or she is hearing-impaired. For another, he or she… can be either a he or a she — the show is open to hiring someone of either gender for the role.

Any idea why CBS.com is only streaming a handful of JAG episodes and not all of them? –Erich
I asked around and apparently “music clearance issues” are to blame.

Anything on my new summer pleasure, Reverie? –RedMan
As if Mara Kint doesn’t have enough to deal with, between the new job and her niece’s ghost (?), even her love life will prove vexing. “In Episode 6, we meet ‘the ex’ (played by Parenthood‘s Sam Jaeger),” Sarah Shahi told me. “That gets really, really freaky, really quickly, because again, I start going a little crazy! Without giving away too much it’s one of those, ‘Did he really happen or did he not?’ kind of things. My mind is sort of playing tricks on me with him.” 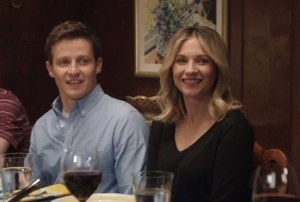 Anything on Blue Bloods? –Barbara
Happy as we might be for Jamie and Eddie’s impromptu engagement, the look you saw on dad/commish Frank’s face at the end of the finale was one of “wariness,” affirms showrunner Kevin Wade. “They want to continue riding together as partners, and he knows as a cop that it’s not necessarily a very good idea,” the EP notes, “so in the moment he’s like, ‘Well, I’m not going to spoil the moment here.’ But on the other hand, it weighs on him in terms of, ‘This is my son and my future daughter-in-law, but they’re also two cops who work for me, and I have to watch out for them in that sense.’ So, there’s some conflict, sure, and that’s part of what we’re going to deal with at the beginning of Season 9.”

Is Philip Winchester leaving Law & Order: SVU? If you know the answer to this question, can you please let me know? –Max
Rest assured, Winchester will be back for Season 20 as Peter Stone. 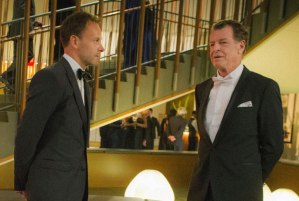 What’s new on Elementary this season? —Jake
“Family stuff will bring Morland (played by John Noble) and Sherlock back together,” starting with the July 2 episode, says EP Rob Doherty. “There will be developments that require the two of them getting together in New York, where they’ll have to deal with the ramifications of something that happens within the Holmes family.” And as they do so, “They’ll have to deal with the professional choice that Morland made a few years ago when he decided to become the head of what was left of Moriarty’s organization.”

Is it safe to assume that Black Lightning’s Jefferson and Lynn are back together in Season 2? Will we get a wedding ceremony? –Shun
Don’t go stocking up on rice at CostCo just yet, seeing as both Christina Adams (about halfway through the video Q&A below) and Cress Williams (here, at the 1:30 mark) seem to suspect new conflicts will arise between the two.

Real questions from real human beings get real answers! If you need the Inside Line on a favorite show, email InsideLine@tvline.com! (With reporting by Vlada Gelman, Andy Swift, Dave Nemetz and Rebecca Iannucci)