Big Brother‘s Season 20 houseguests have had a busy first week: A human was turned into a robot, the summer’s first showmance began and — as if you had expected anything less — no fewer than three players caused controversy.

But for welder Sam Bledsoe and former undercover cop Steve Arienta — both nominated by Head of Household Tyler — Thursday night was easily the most stressful part of the week, as they learned who their fellow houseguests were choosing to boot in the summer’s first eviction.

Before we could learn whether Sam or Steve would be walking out the door, Thursday’s live installment filled us in on some other happenings in the BB house, namely the start of a showmance between Faysal and Haleigh (of which Kaitlyn seemed… jealous?).

Then, it was time for the houseguests to cast their votes — and by a vote of 7-6, Steve was the first Season 20 contestant sent packing, an outcome that left at least two players utterly shocked: 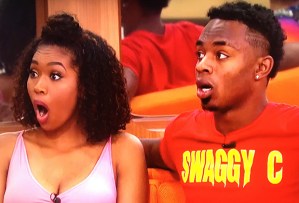 Since Sam presumably didn’t choose to use her Bonus Life power this week — it was never exactly addressed on Thursday’s broadcast — the houseguests moved on to the next Head of Household competition, in which each player tried to launch his or her ball into a pocket with the highest point value.

The eventual victor: Kaitlyn, who seems like she could really use a visit from some positive energy, you know?

With that, I hand it over to you. Was Steve the right choice for eviction, or should Sam have gotten the boot? And who do you think Kaitlyn will target as HOH? Hit the comments with your thoughts!