Uh-oh… Riverdale‘s Archie has a lot more to worry about than just who to ask to prom, huh?

Let’s back up a bit: In Season 2’s “The Hills Have Eyes,” Archie and the gang headed to the Lodges’ swanky cabin in the woods for a weekend getaway, and ended up getting robbed by a band of masked locals. Archie chased one of them — a guy named Cassidy — out of the cabin and tackled him to the ground. Suddenly, the Lodges’ bodyguard Andre appeared and told Archie, “I’ll take care of it from here”… before Archie heard a single gunshot. R.I.P., Cassidy. 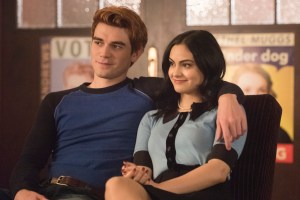 Cut to the Season 2 finale, which saw Archie win the election for student council president… and also stand up to Veronica’s dad Hiram after he tried to manipulate Archie and turn him against his dad Fred. “Wherever you go, whatever you do, I’m gonna be there watching,” Archie promised Hiram, before plunging a knife into the mob boss’ desk to emphasize his point. But maybe intimidating mob bosses isn’t the best idea.

The next day at school, Archie was ready to be sworn in as student council president when he noticed Hiram lurking in the shadows with an odd grin on his face. Suddenly, Hiram’s flunky Sheriff Minetta burst through the doors with a pair of cops in tow. The cops put Archie in handcuffs as Minetta informed him he’s under arrest for Cassidy’s murder. Archie protested, but Minetta read him his rights as his friends stood stunned in the crowd — and Hiram gave him a silent, gloating nod.

“The prospect of Archie on trial is pretty delicious,” showrunner Roberto Aguirre-Sacasa told TVLine in a post-finale Q&A, adding that “the prospect of Archie in a juvenile detention center is pretty delicious,” too. He hinted that there “might be a courtroom thriller element to” Season 3, and “there might also be sort of a prison noir element to it as well.” Either way, the arrest was the culmination of Archie’s power struggle with Hiram, he says: “Archie was playing a very dangerous game all throughout Season 2… and he got bitten in the bum by it.”

We know Archie didn’t kill Cassidy… but will a jury see it that way? Is Riverdale High’s golden boy really headed to the big house? Or will Archie find a way to exonerate himself — maybe with mom Mary’s help, since she’s an attorney — and turn the tables on Veronica’s dad? Vote in the poll below to let us know how you think the cliffhanger will resolve when Riverdale returns for Season 3 on Wednesday, Oct. 10 at 8/7c.