Riverdale‘s core four enjoyed a romantic rendezvous in the woods this week… but trouble is never that far away, is it?

Hiram sends Veronica and Archie off for a weekend at the Lodges’ posh cabin by the lake — with armed bodyguard Andre keeping close watch — and Betty and Jughead come along to make it a double date. (Jughead, still fuming that Hiram is evicting his entire trailer park, sees this as a chance to pump Ronnie for dirt about her dad.) But things get off to a wobbly start: Cheryl, feeling left out, calls Jughead and cheerfully informs him she saw Archie and Betty kissing during the height of the Black Hood hunt. So while Archie and Veronica are testing out their bedsprings (*squeak-squeak-squeak*), Betty and Jughead are back in bickering mode. 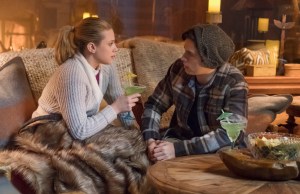 Jughead is mostly just mad that Betty never told him: He admits he used to be jealous of Archie, but now he knows he and Betty are stronger than all that. (Aw!) After Veronica whips up some jalapeño margaritas and prescribes a dip in the hot tub to heal these frayed relationships, she suggests she should kiss Jughead (!) to even the score. They do share a totally platonic smooch — while Archie grits his teeth and glares. And while he’s doing frustrated push-ups at the foot of Veronica’s bed, Betty is slipping into a lace bustier and her Dark Betty wig (!!) to give Jughead “a distraction from his sleuthing.” Now it’s their bed’s turn to squeak-squeak-squeak…

The lovers’ retreat turns sour, though, when Veronica finds out that Andre’s been keeping an eye on them — and Archie knew about it! — and orders Andre to leave. She takes Betty into town for a girls-only shopping trip, making sure to flirt with the store cashier along the way, while Archie and Jughead do some male bonding in the woods. But when Jughead learns that Hiram has purchased his trailer park, and Betty learns that he bought her mom’s newspaper, they turn on Veronica, accusing Hiram of trying to buy off anyone who stands in his way. So much for jalapeño margaritas and hot tubs, huh?

Then — because this show can’t even go a week without putting its characters in grave danger — masked robbers burst into the lodge, wielding axes and demanding cash. Veronica recognizes one of them as the cashier she flirted with, and manages to trigger a silent alarm that scares them off. But the cashier snatches her necklace on the way out, and Archie (having major Black Hood flashbacks) chases the guy down outside and tackles him. Suddenly, Andre appears out of thin air — where did he come from?! — and assures Archie, “I’ll take care of it from here.” As Archie’s walking away, he hears a single gunshot. Gulp.

Back in Hiram’s study, Archie confesses that he still regrets he didn’t stop the Black Hood when he had the chance, and Hiram advises him to “never, ever hesitate.” Oh, and he gives him back Ronnie’s necklace, too. Welcome to the family, Archie. 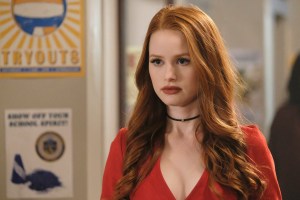 CHERYL BLOSSOMS | It’s nice to see Cheryl finally get some screentime, huh? (And killer dialogue like: “I need no reasons. I simply… am. Feel free to tremble.”) She’s still feuding with her mom Penelope — who blames her for driving away Hal and calls her an “emotional anorexic” — and she snaps at Toni when the “Sapphic Serpent” tries to get to know her. But later, a tearful Cheryl makes a big confession to Toni: She was in love with a girl named Heather in junior high, but Penelope split them up. Toni thinks she’s “sensational,” though. Hmmm… could Cheryl’s obsession with Josie be transferring to Toni? 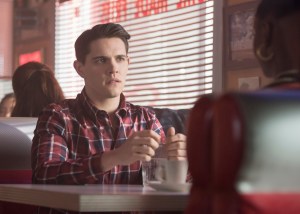 * Kevin had a tough week, having to watch his former flame Moose cuddle with girlfriend Midge. (She seems to think Kevin and Moose were just “lab partners.”) Plus, he had to learn that his dad Sheriff Keller is having an affair with Former Mayor McCoy, while his mom is overseas in the military. It’s good that he and Josie sat down with their parents to talk it out, though.

* Creepy Chic continued to be creepy, telling Jughead if he tells anyone about the dead body, “it’ll be bad for Betty and Alice.” Then when Betty came home from her weekend in the woods, Jughead warned her about Chic while he was lurking upstairs. This ticking time-bomb is going to go off soon, isn’t it?

* Man, that was serious product placement for the movie Love, Simon. (Directed by Riverdale executive producer Greg Berlanti, by the way.) Seemingly everyone in town went to see it… and we even saw a clip! If the Bijou’s box-office receipts are any indication, it’s on track to be a blockbuster.

* LOL at Jughead referring to himself and Veronica as “Vughead.” It doesn’t quite have the same ring that “Bughead” does, but I’ll allow it.

* In case you missed it, Golden Globe-nominated actress Riley Keough (The Girlfriend Experience) took to Twitter yesterday to pitch herself for a role on Riverdale. Cheryl’s older, even more conniving sister Peach Blossom, perhaps?

I just want to be cast in Riverdale

* These words from Jughead about the core foursome’s complicated dynamic sounded a bit ominous: “It’s like the four of us are in a powder keg. All it would take is one match, and we would all blow up.” Are we sensing an explosion on the horizon before Season 2 is over?