Yes, Riverdale‘s students are putting on a musical… but one member of the gang won’t be hitting any high notes. 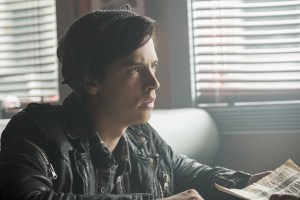 Cole Sprouse’s Jughead will not sing in the CW teen drama’s April 18 musical episode, which sees the gang mount a production of Carrie: The Musical, executive producer Roberto Aguirre-Sacasa confirmed for reporters at a recent press screening. Apparently, Sprouse isn’t a huge fan of the genre, the EP explains: “Cole and I talked about it a while ago, and I said, ‘How do you feel about musicals?’ At that time, we were going to do Little Shop of Horrors. And he basically said, ‘Listen, I never sang for Disney. It would take a lot.'” (Sprouse, you may remember, grew up as a Disney Channel star along with his twin brother Dylan on shows like The Suite Life of Zack & Cody.)

But that choice fits with Jughead’s persona anyway, Aguirre-Sacasa notes: “When we really thought about the character of Jughead, he felt like the one character who probably wouldn’t be in the school musical… when you see the episode, he’s very much an integral part of it, and he’s doing something quintessentially Jughead during the musical. Except he doesn’t sing.”

Sprouse’s aversion to singing apparently extends to real life as well: Aguirre-Sacasa recalls that Riverdale‘s Season 1 wrap party was at “some tiki bar that had a stage, and the bulk of the party was the entire cast and crew [doing] a variety show. So literally every cast member sang but Cole. Every parent, every kid, every crew member sang… except for Cole. So it was like, ‘OK, got it.'”

More details on Riverdale‘s musical episode from the EP:

* A school musical gives the Riverdale writers a chance to root the characters in a traditional high-school story for once, Aguirre-Sacasa says: “On some level, Riverdale is a crime and a mystery and a pulp show, but there is an element of coming-of-age and of high school, obviously. And doing the school musical is such a rite of passage that we wanted to do that.”

* So why Carrie? “I’m a huge fanatic of Carrie, the novel and then the movie,” Aguirre-Sacasa admits. “I was obsessed with the Broadway flop of Carrie: The Musical. Five or six years ago, one of my good friends revived it off-Broadway, and he revealed it to be the gem that I always knew it was. So we thought, ‘This would thematically be a great musical for Riverdale to do.'” Plus, it already had some inherent similarities to Riverdale: “That show also has archetypes like the good girl next door, the nice boy who takes Carrie to the prom… it felt like we could play with these archetypes.”

* What was co-star Madelaine Petsch’s response to learning that Cheryl Blossom would be playing the lead role of Carrie in the musical? “Overjoyed.”