The good news: Archie was just voted student body president! The bad news: He might have to serve out his term from a prison cell.

Riverdale‘s Season 2 finale served up plot twists like burgers and milkshakes: Hermione is the new mayor! F.P. handed over control of the Serpents to Jughead! Veronica… bought Pop’s?! (Yeah, we’re still processing that one, too.) But the most shocking twist came at the very end, when Archie was about to celebrate his victory in the school election. Sheriff Minetta and the cops rushed into the school, slapping handcuffs on Archie and arresting him for the murder of that townie Cassidy that Andre killed during the gang’s mountain getaway. (Hiram framed Archie, you see, for daring to stand up to him — and to get that meddling redhead out of his way.)

With Riverdale‘s golden boy behind bars, TVLine reached out to showrunner Roberto Aguirre-Sacasa to find out what’s in store for Season 3. Read on for his take on Jughead popping a question (maybe not the question) to Betty, Cheryl finding “some happiness” next season, Kevin and Moose’s big smooch… and whether the Black Hood’s reign of terror is really, truly over. (For real this time.)

TVLINE | Archie was arrested for murder, and taken away in handcuffs. Obviously, Hiram set him up. So if Season 1 was a murder mystery, and Season 2 was a horror movie, does that mean Season 3 will be a courtroom thriller?
We’ve just started talking about Season 3. There might be a courtroom thriller element to it. There might also be sort of a prison noir element to it as well. We always kind of have crime and noir elements. The prospect of Archie on trial is pretty delicious. And the prospect of Archie in a juvenile detention center is pretty delicious. [Laughs] So we’ll see what’s ahead.

TVLINE | But this really sets up Archie vs. Hiram as a major Season 3 conflict, right?
Absolutely. I think Archie was playing a very dangerous game all throughout Season 2. He was attracted to Hiram’s power, and the way he moves through the world. And he got bitten in the bum by it. [Laughs] It’s major consequences for the stuff he’s been doing in Season 2.

TVLINE | Can Archie’s mom come back and help? She’s an attorney.
Yeah, right? You’d think Archie’s mom, as a lawyer, would get involved. I love Molly [Ringwald] on the show, and I always welcome Mary Andrews’ visits to Riverdale. I can’t imagine a world in which she lets this happen without getting involved. 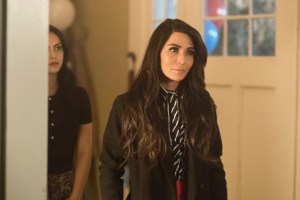 TVLINE | Hermione won the race for mayor. What does that mean for the Lodges? Is she going to be a front for Hiram’s criminal empire, or will she assert herself a little more now that she’s in power?
We are going to see Hermione in a very tricky position. She’s in the mayor’s office, on very shifting ground with Hiram. I think we played them in lockstep a lot in Season 2. By the end of the season, Hermione was seeing Hiram’s true colors. So I think they will be engaged in a very careful power struggle — not to go to the nuclear place, but I think Hermione definitely has questions about Hiram and his agenda. Doing his agenda is one thing, but being his puppet is something else.

TVLINE | Jughead is now in charge of the Serpents, and he asked Betty to be his “queen.” What was he asking her there, exactly? Was that a marriage proposal?
Gosh, what a very interesting question! Let me say this: We define what that is in the season premiere coming back. But it does feel like it’s not just, “Join the Serpents.” It does feel like there’s a romantic component to it, doesn’t it?

TVLINE | Veronica just bought Pop’s, and she’s opening up this speakeasy in the basement. Will we be seeing real bands playing there, like on The O.C. and 90210?
You know, it’s funny… of course it’s possible. But the great thing about us is, we have a superstar to be in Josie and the Pussycats. We moved away from Josie and the Pussycats in Season 2, and one of the hopes with Season 3 is having this cabaret space, where we’ll be able to see more of Josie and the Pussycats, and tell some of those showbiz stories — as always, with a Riverdale twist. It’s mostly about showcasing the musical talents of our cast. 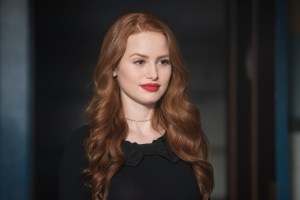 TVLINE | Cheryl is a full-fledged Serpent now, and Vanessa Morgan is a series regular next season. So will we get to see Cheryl and Toni have a few moments of committed bliss, or are there more obstacles ahead for them?
Listen: They’re both strong, independent, feisty, gorgeous, intelligent women. So I think they’re in a new relationship, and all new relationships have challenges. But yeah, they’re going to be blissed out, for sure. Cheryl has earned some happiness, and some bliss.

TVLINE | How about Kevin and Moose? They shared that big kiss. Will they be able to explore their relationship out of the closet?
I’ve been rooting for Kevin and Moose, honestly, since the pilot, when they found Jason Blossom’s dead body together. They found that body, and that interrupted them hooking up, and it’s sort of like under the shadow of Midge’s death and murder, they found each other again. I don’t think it’s going to be easy. They have to sort of untangle what all this means. But I’m rooting for them. [That kiss] was a standalone scene, and usually, those are the first to [get cut] when the episode comes in long. But we really wanted to give that moment to Kevin and Moose, in the hopes of exploring it more in Season 3.

TVLINE | With Hal in prison and Tall Boy dead, can we finally put the Black Hood to rest now? Or could that storyline always pop up again, because of the darkness in Betty’s family tree?
I will say what I always say about characters on Riverdale: Never say never. No one is ever completely dead. But I think if the Black Hood returns, it’s probably going to be a while before he or she comes back.

Alright, Riverdale fans: It’s your turn. Grade the Season 2 finale in our poll, and then grab a booth in the comments to chat about the finale and what you want to see in Season 3.