Westworld‘s cast is impressive. Its cinematography is gorgeous. Its central concept is as intriguing as it is innovative.

So why is the HBO drama such a chore to watch?

Before you start reducing my pain threshold and coming for me with sharp, pokey objects: If going deep on Westworld is your jam, fantastic. If you’re the kind of fan who enjoys parsing every line of self-important dialogue for what it might mean six episodes down the road, congrats. You’re going to disagree vehemently with me here, but The Valley Beyond is big enough for all of us, right?

I’m talking here to the regular viewer who enjoys following the robots on their loops (or lack thereof) but who, like me, might think the series’ meaning-of-personhood navel-gazing and mystery breadcrumb-dropping is wearing a bit thin. Or, as a friend put it Monday morning: “I’ve suspected this for a while, but it is now official: I am too dumb for Westworld.”

I’d argue that he — and anyone else feeling frustrated with the series’ storytelling — isn’t necessarily lacking in smarts. Instead, they’re merely reacting to the series’ second season, which was as brain-scramblingly ponderous as Bernard’s fractured memories and culminated in a 90-minute finale Sunday that felt bloated and indulgent.

Yes, the final installment gifted us with a bunch of answers and some significant plot-forwarding. We got a few new mysteries for Season 3 to explore. We also got many minutes of Bernard and Ford (or Bernard’s BrainFord or ImaginaryFord or GoodLordWhoEvenKnowsAnymoreFord) chatting about whether freewill actually exists. Ooh wait, I know this one: We’ll figure it all out once we learn what’s inside The Hatch, right? 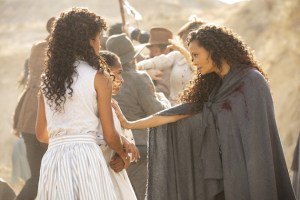 You’ll forgive me if I confuse Westworld with Lost, another sci-fi show marked both by arcs of genius and seasons of the bad kind of WTF? Season 2 of the HBO drama felt very similar to when Lost got lost, when the ABC series’ compelling and tight storytelling began to meander into Philosophy 101 term-paper territory.

The show would be a lot stronger, in my opinion, if it focused more on plots like Maeve’s heroic journey to save her daughter. Want me to wrestle with the idea of what does or doesn’t constitute a person? I’m far more likely to do it while watching a badly damaged robot sacrifice all for the assemblage of circuitry she’s been led to believe is her child than I am while witnessing androids vaguely speechify about in which world they belong.

Because that latter scenario? Doesn’t look like anything to me.