Cancel the data purge, because we’ve got everything you’ve got to know about Westworld‘s mind-bending Season 2 finale right here.

Don’t have the time either to watch the Season 2 finale of HBO’s robot drama or slog through a long recap? Here are the key takeaways from Episode 10, “The Passenger.” 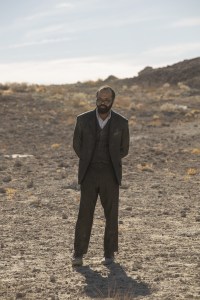 * It’s confirmed that Dolores, not Ford, built Bernard. And Bernard, in turn, built The Forge/The Valley Beyond, a “pristine” new world just for the hosts, who will “leave their bodies behind, but their minds will live on” in the giant server. (Hence all those bodies in the water in the season premiere.) Also of interest: The idea that humans don’t change (“the best they can do is live according to their code,” the system — which takes on the form of Logan — tells Bernard) but awakened hosts can alter their primary drives.

* But Dolores doesn’t want a fake world, even if it would be just for the hosts. So she starts to delete all of Delos’ data. Bernard then shoots her, killing her, and stops the file purge before it’s complete. Later, after watching Charlotte shoot Elsie dead in order to preserve the secrecy around the Delos project, Bernard chooses to survive rather than to be the last of his kind. And upon that decision, he realizes that the voice in his head he thought was Ford was actually his own all along. (Season 1 bicameral mind callback!)

* Meanwhile, Maeve saves herself (yay!) and makes it to The Valley Beyond just as Charlotte and her team arrive. The Delos personnel are following Clementine, who’s carrying Maeve’s code and therefore causes all of the hosts to take each other down. Before the code can infect her daughter, Maeve holds off the violent horde so the girl and her second mom can make it to The Valley; Maeve mouths “I love you” to the girl just before the security team shoots the former madam dead. (Hector, Lee, Armistice and Japanese Armistice also die in similar fashion.)

* Oh, and Bernard also revived Dolores but in a host body identical to Charlotte’s. I’ll call her Charlores. So Charlores shoots Charlotte dead, redirects all of the info contained in The Forge so it’s somewhere no one will find it, then grabs five host-brain-orbs and sneaks out of the park with them, posing as Charlotte the human. Related: Stubbs seems to realize that Charlores is not Charlotte, but he allows her to leave anyway. Also related: Stubbs may be a host himself.

* In something that looks like the home Arnold took Dolores to earlier this season, Original Flavor Dolores —in contemporary dress — tells Bernard that “we’re in our new world” and that it will take both of them to survive, but they won’t be friends or allies. Then Charlores shows up and the women leave. Bernard wanders the house, seeing a photo of him and his son, as well as a host-making contraption and some bloody surgical instruments. “We are the authors of our stories now,” Dolores voiceovers as Bernard approaches the front door, then opens it and walks through. 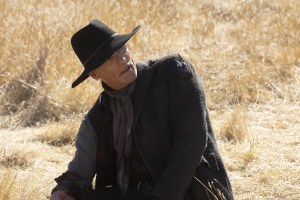 WHO MADE IT TO THE VALLEY BEYOND? | Maeve’s daughter and her NuMaeve mom, Akecheta, Kohane, many members of Ghost Nation, Teddy (courtesy of Dolores)

WHO’S REAVEALED TO BE A HOST? | William, aka The Man in Black, who in a post-credits sequence runs into a host (?) who looks like Emily. She leads him into an area set up like old Jim Delos’ holding cell, where he asks how many times they’ve tested him. “It’s a been a long time, William. Longer than we thought. I have a few questions for you,” she answers, adding that the “baseline interview” will help establish “fidelity.” Sound familiar?

Now it’s your turn. Grade both the Westworld finale and Season 2 on the whole via the polls below, then hit the comments to kick in any additional thoughts!