If you watched this week’s Westworld, you know that we’re referring to that mind-bending insinuation that takes place at the end of the episode and makes us question everything that came before it. And if you didn’t happen to catch this week’s hour, you’re in for a head-scratching treat. 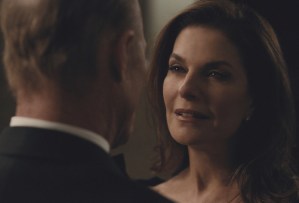 * The Man in Black toggles between the present — in which he’s wounded and a bit out of sorts — and a flashback to the night his alcoholic wife, Juliette (hi, Sela Ward!), killed herself by slitting her wrists in the bathtub. Her death was preceded by an event lauding the elder William for his philanthropy; at the party, TMIB crankily referred to a deal in which Delos stayed out of his stories and he stayed out of the Valley. Then Ford slipped The Man in Black a file; after TMIB left, Ford indicated that he had “one final game” in mind for his longtime adversary. Later that night, Juliette lashed out at her husband, leading Grace — or rather, the character we’d been led to believe was named Grace but is actually named Emily — to put the wheels in motion to have her mom involuntarily committed. After Juliette heard TMIB confess that she was the only one who saw the “stain” on him — and after she found the file that Ford gave TMIB, which contained footage of his misdeeds over many years in the park — she killed herself.

* In the present, Emily says she’s going to expose her father’s project — which involves capturing every guest’s cognition via surreptitious scanners in their hats (?) — and expose him, then have him locked up. “You are, in your very essence, a lie,” she spits. And when a security team shows up, TMIB grabs a gun and shoots them all dead… then does the same to Emily, because he assumes she’s a host programmed by Ford to mess with him, because how else would she know about the file? But it turns out she found the damning evidence (because Juliette left it somewhere she knew her daughter would see it) and has it on her person. TMIB stumbles into a field and holds a gun to his head, but then puts it down and undoes his sleeve, fumbling with a knife that he points into his forearm… just like we’ve seen the hosts do when they want to access a port. Hmm…. “Is this real? Are you real?” Juliette’s voice echoes in his mind, as TMIB wonders if any choice he’s made was ever really his. 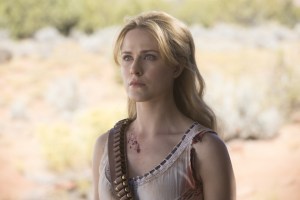 * Dolores, aka “deathbringer,” and her gang run into members of Ghost Nation, who tell her that the Valley Beyond isn’t meant for her. Naturally, that means she guns them all down. She tasks Teddy with cleaning up any survivors, but he lets the guy with the mohawk go. Later, when Teddy and Dolores are alone, he says she made him “into a monster” that’s just as bad as the humans they’re trying to take down. And since he could never hurt her, he pulls out his gun and puts a bullet in his own head, instead. Horrified, Dolores cries as he bleeds out. 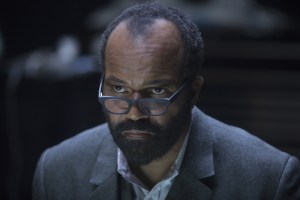 * Charlotte plans to use Maeve’s code to instruct all the remaining hosts in the park to destroy each other. Ford appears to Maeve, who’s still laid out on the operating table. “You stayed her in this world, to save your child,” he notes. “So have I.” He encourages her not to let them end her story there. Just then, the tablet next to her shows that someone (Maeve?) is unlocking her key permissions. Meanwhile, Bernard removes Ford’s code from his body, then tells Elsie what he found in the Cradle: “What they’re doing to James Delos, they’re doing to everyone who’s ever visited the park.” All of the guests’ cognition are contained on a big server called “the Forge,” and that’s where the hosts are headed. Then he leaves her behind so he can get there and “dictate the outcome we want.”