Warning: This post contains spoilers for Sunday’s Westworld finale. Freeze all motor function if you haven’t seen it yet.

Westworld capped its Season 2 finale Sunday with a 90-minute episode full of android intrigue — and after the episode faded to black, things got even more interesting.

The HBO drama ended with a post-credits sequence flashing back to when William, aka The Man in Black, got off the elevator at The Forge. He was met by someone (likely a host) who looked like his daughter, Emily, which made him lament that he was already “in the thing” — aka that he existed only in the park’s servers. 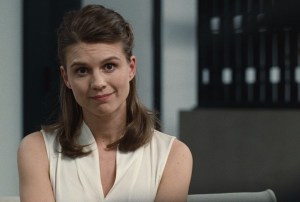 But Host Emily assured him that the system was “long gone,” thanks to events that transpired during the finale, and that he was in his world. He knew he was in the park but couldn’t tell her how long he’d been there. And when she asked what he’d been hoping to find or prove, he testily replied, “That no system can tell me who I am. That I have a f–king choice.”

As she led him into a holding area that looked just like the one we first saw in this season’s Episode 4, The Man in Black seemed to start to understand what was happening. “How many times have you tested me?” he asked. “It’s a been a long time, William. Longer than we thought,” she replied. “I have a few questions for you.” And when he wondered why, she added that the interview would help establish “fidelity” — just like Dolores had told Bernard, whom we don’t have to remind you is a host himself, in an earlier flashback.

The twist was especially sneaky, given that in Episode 9, we were led to believe that William’s actions that seemed to indicate he might be a host (digging in his forearm for a port, for instance) were manifestations of his guilt over shooting and killing his daughter in the park. But the show loves to play with time, as well as with our perception of when we’re at in the storyline, so have at it in the comments with all the ways I’m wrong.

Now that the truth is out, time to confess: