Now that Lucifans have had a full weekend to process and party over the news that Lucifer, cancelled by Fox, will indeed be back for a fourth season via Netflix, TVLine invited co-showrunners Joe Henderson and Ildy Modrovich to field some burning questions about episode counts, where/if the “bonus” episodes will fit in and more.

After all, the Devil is in the details….

HOW DID THE PRODUCERS GET THE GOOD WORD?
“We found out 10 minutes before the announcement came out [on Friday afternoon]” Henderson shares. “We were just barely ahead of the curve, because that’s how quickly everything happened. Adds Modrovich, “My agent called me, and then we got a lovely call from [Warner Bros. TV president] Peter Roth, which was pretty darn funny. I guess he called Tom [Ellis] first and said something like, ‘Sharpen your horns!'”

HOW MANY EPISODES HAS NETFLIX ORDERED?
As previously reported by TVLine, Netflix has ordered 10 episodes, Henderson confirms.

OK, BUT DOES THAT INCLUDE THE TWO ALREADY-PRODUCED (AND ALREADY-AIRED) ‘BONUS’ EPISODES THAT WERE TO BE SPRINKLED IN SEASON 4? 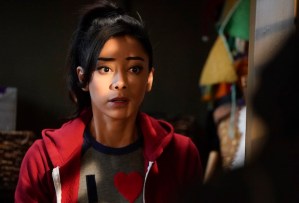 “No, no,” the EPs assert — Netflix has commissioned 10 all-new episodes. And yet, Season 4 might possibly run longer, if one of the “bonus” episodes gets folded in somewhere. “The first thing we’ve got to figure out,” says Henderson, “is where the one that wasn’t a complete standalone, the Ella-focused episode, might fit.”

WILL THE CAST BE ABLE TO HIT SAN DIEGO COMIC-CON NEXT MONTH IN SOME CAPACITY?
“We would love to; we don’t know,” says Henderson, citing the late pick-up as a factor. “We love being there, but we just don’t know.”

WILL LUCIFER‘S NETFLIX EPISODES RUN CLOSER TO AN HOUR?
Versus broadcast-TV’s commercially interrupted length? “We’ll probably stick roughly to our 43 minutes,” Modrovich ventures. “That’s part of what we’re going to talk to Netflix about. I think we might have a bit of room for flexibility, hopefully, so if there’s a scene we love and we don’t want to cut it, we’re hoping that now we won’t have to. But we’re not suddenly going to have hour-and-a-half episodes!” As Henderson observes of the leap from broadcast-TV to streaming, “You forget that editing is your friend. Sometimes cutting something is a good thing.”

HOW IS THE ORIGINAL SEASON 4 STORY PLAN AFFECTED?
To put it simply, Season 4 on Netflix will encompass what was to be the first half of the original Season 4 arc. “We were going to have two parts to it anyway, so we’ll just tell a really strong, gnarly first part,” Modrovich enthuses. Doing so, says Henderson, “lets us concentrate the story and focus it, and that’s what’s really exciting about this. We have a really strong first half that is now going to make for an amazing story.”

WHAT INTERESTED NETFLIX ENOUGH TO MAKE LUCIFER THEIR FIRST BIG ‘SAVE’ IN A LONG WHILE?
Per Henderson, “What we have been told, basically, is 1) they love the show, and 2) they loved the fan reaction. They really noticed it. The fans were heard, and that’s the biggest thing that we should convey. They saw the passion of the fans, and apparently a number of people over there just like the show.” Modrovich echoes that takeaway, saying: “With social media, the fans now can make a difference, and that is the coolest part of this whole experience. They really feel ownership, like, ‘Hey, we got our show back,’ and I love that.”

WILL NETFLIX AT SOME POINT STREAM PREVIOUS SEASONS OF LUCIFER?
The EPs were unsure, but TVLine hears that yes, at some point Seasons 1-3 will be available on Netflix (Stateside).

LASTLY, WILL THIS LAST-MINUTE SAVE BE BILLED AS ‘THE FINAL SEASON’?
Oh Hell no. Rather, in success, “There is always the potential for more,” Modrovich says.