Though standalone in nature, one of Lucifer‘s “bonus” Season 3 episodes hinted at Chloe’s reaction to seeing her partner’s Devil face at the close of this month’s finale — which may come as small comfort to fans mourning the series’ cancellation by Fox.

In this Monday’s first bonus episode, “Boo Normal,” Ella was unexpectedly visited by Ray-Ray (House‘s Charlyne Yi), an old childhood friend of the ghost variety. Since Ella had ended their association years ago, she assumed that Ray-Ray resurfaced because of a connection to the episode’s murder victim. But it turns out that Ray-Ray was there to urge Ella not to move back to Detroit and her scalawag brothers, as she had been contemplating, but rather stay in L.A. with her new “family,” one that validates her. 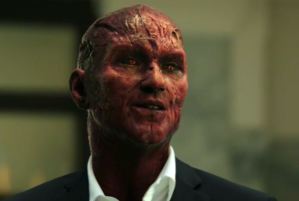 Having been caught a time or two talking to her invisible “friend,” Ella wound up confiding in Chloe that she sees ghosts. Or, a ghost. To which Chloe responded, “I have seen a lot crazier things. Like, a lot” — which I can confirm was her referring to laying eyes on Luci’s Devil face for the first time. And since Chloe isn’t in a looney-bin, and is still working with Lucifer in this episode, we can deduce that she arrived at a certain peace with that hell of a reveal.

Speaking of reveals, there was a whole lot more to Ray-Ray’s story than she let on to Ella. After Lucifer finds her in the LUX penthouse wearing better make-up and, well, wings, we learn that she is no “guardian angel” type of ghost but instead Azreal, the Angel of Death — aka Lucifer’s sister! Having met the bubbly Ella years ago but unable to hang with her in perpetuity (or, ahem, spy on her in the shower), she led Ella to move to L.A. and land in Lucifer’s path, so that two of Azreal’s favorite people could be a part of each other’s lives.

Whereas the first bonus episode offered two fun Easter eggs, the second, “Once Upon a Time,” delivered to fans a whole damn basket, by way of a reality in which God (voiced by Neil Gaiman) didn’t put Chloe in Lucifer’s path. Instead, we meet Chloe mid-shootout… as the star of the well-worn Weaponizer action-film franchise. Chloe’s dad never died and is still at the LAPD, while she is still an actress (albeit one who still has Hot Tub High School on her IMDb page, shhh).

Lucifer meanwhile still runs LUX (and is planning on expanding, into Vegas) when one of the stunt guys on Chloe’s film turns up dead at the club. Lucifer goes about having Ella (who here traffics in hot cars) investigate the automotive-related murder weapon, while Chloe uses her prop badge to snoop around a race track, where her dead friend was planning his next career. There, Chloe and Lucifer meet, as they perhaps were fated to, and though they at first see each other as adversaries, she suggests they work together to solve this case.

As the evidence trail leads back to he set of Chloe’s movie, we get a rat-a-tat-tat of in-jokes, from how her badge says “Property of Warner Bros.” (Lucifer‘s production company) to how good she is at playing a cop, to the mocking of how a location looked a lot like Vancouver (where Lucifer filmed Seasons 1 and 2). Dr. Linda even gets in on the action, as a cleavage-flaunting TV shrink who will do most anything (though begrudgingly) for ratings. 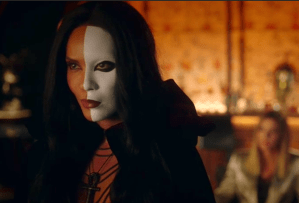 Dan, meanwhile, is sketchy enough of a cop that Charlotte Richards, Lucifer’s lawyer (and almost-hook-up, ewww!), is able to recruit him to help her break into the LUX safe and make off with millions. Charlotte is briefly caught literally holding the bag — by Maze in all her half-masked, comic book-style glory, with a team of minions at her side.  Maze allowed Charlotte to get away (demons do like a sinner!), and in one of the final scenes we see the lawyer and Dan speeding off into the night, holding hands.

The very end of the highly entertaining “Once Upon a Time,” though, was all about this alternate incarnation of Deckerstar, who after cracking the murder case — which earned Chloe a long-awaited pat on the back from her pop — mulled the notion of the actress “playing detective for real,” and the “half-in-the-bag club owner” possibly tagging along.

What did you think of this season’s “bonus” episodes? Did they soothe — or only add to — the sting of cancellation?