Warning: The following contains spoilers from the first six episodes of The Ranch Part 5. Looking for our previous recap? Click here.

(Note: On Dec. 5, 2017, Danny Masterson was fired by Netflix. Because of The Ranch‘s accelerated production schedule, Masterson still appears in all 10 new episodes. To find out how he’s written out in the Part 5 finale, click here.)

Drama ensues at the halfway point of The Ranch Part 5, as a natural disaster puts a damper on Colt and Abby’s wedding plans.

With a wildfire fast approaching, the Bennetts evacuate their family home and head to Garrison High, where everyone affected is taking shelter in Episode 5. Colt and Rooster arrive first, followed by Beau and Maggie, all of whom are surprised to see Chuck and Janice. As you’ll recall, Abby left at the end of Episode 4 to retrieve her parents, and Colt’s been unable to reach her ever since.

Chuck and Colt hit the open road in search of Abby, driving right through a police checkpoint and into the fire zone. There, they find her abandoned truck and assume the worst, but she soon turns up on a stolen ATV, along with a box of newborn puppies she managed to rescue. Shortly thereafter, the fire is contained.

The next morning, Colt and Abby get some alone time. Abby’s convinced the universe is trying to stop them from getting married, but Colt promises her nothing else will stand in their way. With Rooster’s help, he surprises her with a makeshift wedding on the high school football field. Maggie officiates, and Janice walks Colt down the aisle. 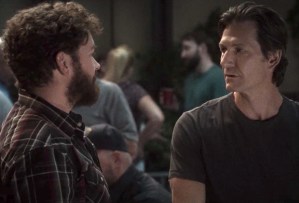 While Colt’s having the best day of his life, Rooster’s dealing with a potentially deadly love triangle. He meets Mary’s ex-husband/current boyfriend Nick (Banshee‘s Josh Burrow), who’s not only Darlene’s father, but a former convict. At the wedding reception, Nick approaches Rooster and warns, “If you ever go near [Mary] again, I’ll f—king kill you.”

* Maggie puts Beau in his place when he continues pushing everyone away. He apologizes to his ex, then tells her that Iron River might have been impacted by the fire, according to the latest news reports.

* Chuck offers to invest in Colt’s ranch. Little does he know that Janice already gave their son-in-law the money he needed.

Your thoughts on The Ranch Part 5 so far? Drop a comment below.