UPDATE: Rooster’s fate was revealed in The Ranch Part 6. Read our recap here.

The Ranch Part 5 ends with the not-so-shocking departure of Rooster Bennett, whose portrayer Danny Masterson was accused of raping four women in the early 2000s and subsequently fired by Netflix.

In the episode, Rooster returns to his cabin to find Mary’s boyfriend Nick (Banshee‘s Josh Burrow) waiting for him. The ex-con asks Rooster if he was with Mary the previous night, but Rooster denies it. Nick then threatens to kill Rooster (again!) before leaving. Afterwards, Rooster gets in touch with Heather, and tells her to warn her mother. It’s the last straw for Mary, who finally ends things with Nick. She tells Rooster when he arrives at Maggie’s, but insists on taking some time before the two of them rekindle their relationship. But Rooster can’t take no for an answer, and invites her to WrestleMania.

Later that night, Rooster returns home to find Nick waiting for him again. This time around, he throws Rooster a duffel bag full of his belongings, and gives him two choices: “You either take that bag and disappear, or you could just disappear.” Rooster attempts to stand up for himself, then Nick pulls out a gun. The Bennett brother grows silent, then picks up the bag and walks towards the door. Before he leaves, Nick warns, “If you tell anyone about this, I’ll start with your family.” And so, Rooster exits. For good. ¯\_(ツ)_/¯

Masterson’s termination was announced by Netflix on Dec. 5, one day after production wrapped on the Part 5 finale. It’s unclear whether the writers intended for the disgraced actor’s storyline to conclude with him skipping town, but that’s exactly what happened here. It’s anyone’s guess how the show deals with Rooster’s absence and the still at-large Nick in Part 6. A return date has not yet been announced. 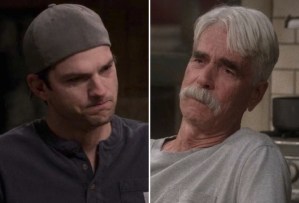 * After finding out that Beau intends to sell the Peterson Ranch, Colt pays Lisa Neumann a visit and offers to run it for her. She accepts his offer on one condition: he get his father’s blessing.

* Beau apologizes for shutting Joanne out when it comes to his kids. She helps him understand that he can’t keep treating his sons like second-class citizens, which inspires the Bennett patriarch to apologize to Colt. He sits him down and says he knows he screwed up as a father, but wants things to change. For starters, he’s told Neumann’s Hill he’s no longer interested in selling Peterson’s ranch. He’s giving it to Colt and Rooster to run as they see fit. Beau then reminds Colt that he loves him, and says he can’t wait to meet his daughter.

What did you think of The Ranch finale? Grade Part 5 via the following poll, then drop your thoughts in a comment below.