It’s unusual for TVLine to review a series after it’s debuted, never mind four seasons into its run. But what’s happened to Fear the Walking Dead is beyond unusual. Since the AMC drama installed as its new showrunners Andrew Chambliss and Ian Goldberg, it’s gone from being an adequate stopgap between seasons of The Walking Dead to a show that’s as good or arguably even better than the one from which it was spun off. 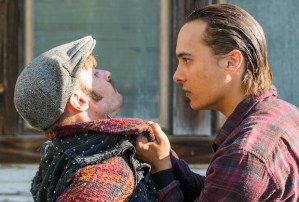 How did Chambliss and Goldberg pull it off? For starters, they let the dam explosion that ended predecessor Dave Erickson’s run wash away some of the characteristics that made a couple of their regulars harder than they had to be to like. It didn’t take much, either. With just a little attitude adjustment, Madison was suddenly warmer and more optimistic than the heroine we’d come to know and be ambivalent about. She was still to the marrow a survivor, only now she hardly seemed like someone who’d harbor a murderous sociopath because he might at some point prove useful. Similarly, Nick 2.0 — may he rest in peace — became a hundred times more relatable once he’d put behind him his self-destructive fixations with zombies and Troy.

As those characters were being reset, Chambliss and Goldberg set about infusing Fear with new blood. Thus far, I’m on the fence about Maggie Grace’s Al, since every other one of the videographer’s lines is, “I want your story.” And I would have loved for TWD’s Morgan to have left behind some of his mopey baggage before Lennie James arrived on Fear. But Jenna Elfman has been a revelation as Naomi, a survivor so haunted that watching her can make you feel like you’re seeing a ghost. And her romance with fellow newcomer Garret Dillahunt’s endearing John is as bittersweet as any love story that the franchise has ever endeavored to tell. 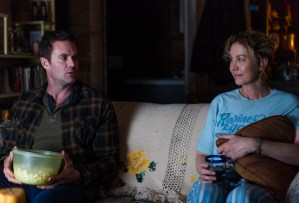 On top of it all, this version of Fear is full of surprises — and not just the “OMG, they killed Nick!” kind. Over and over again, Season 4 has knocked me off the couch, shocking me with the identity of John’s Laura (I had bet on Madison), Charlie’s allegiance to the Vultures (not to mention the little girl’s murder of Nick!), Strand’s willingness to run out on Madison, Naomi’s betrayal of her new friends, John’s shooting… And, every time the list grows, I realize anew that Fear has stopped being a show that I like and watch out of habit, and begun being a show that I love and watch because I can’t wait to see what happens next. If that isn’t beyond unusual, I don’t know what is.

THE TVLINE BOTTOM LINE: If you’ve tried Fear in the past and thought, “Meh,” try it again. You’ll care about the characters in the revamp — maybe more than you want to.