With rumors swirling that Fear the Walking Dead’s Madison is a goner and viewers just don’t know it yet, the AMC drama pulled a fast one with Sunday’s “Good Out Here” by having young Charlie fatally shoot Nick to avenge his murder of Ennis, one of her villainous father figures. (And just when it looked as if Nick and Morgan were at the beginning of a beautiful friendship, too!) Here to explain to TVLine why Madison’s son had to kick the bucket, as well as hint at the heroine’s fate in the show’s auspiciously-started Season 4, are new showrunners Andrew Chambliss and Ian Goldberg.

TVLINE | How did you arrive at the decision to kill off Nick?
ANDREW CHAMBLISS | Frank [Dillane] actually had approached AMC and the producers during Season 3, asking to leave so he could pursue other projects. So it was actually in the works before we came on board, and it was one of the first things we were tasked with as we were mapping out the season. Our approach to it was finding the most emotional way to give Nick a send-off that would really impact the story moving forward. And it was something we worked closely with Frank on. It was important to him to give Nick a send-off that honored who the character had been and kind of the possibility of where he might have gone.

TVLINE | I thought it was particularly brutal to have Charlie kill Nick, given the soft spot that he’s always had for kids.
IAN GOLDBERG | Nick does have a complicated relationship with Charlie. Even though they had not spent a lot of time together in the stadium, he came to feel a bit like her older brother. There was a bond there, so it hurt him very much when he realized she was with the Vultures. Also, for Charlie, she’s sort of an orphan of the apocalypse. The Vultures are her family, so when she shoots Nick, that’s not her being a villain. Ennis to her was like family. So it was emotional for her to lose someone that close. It’s complicated on all sides. 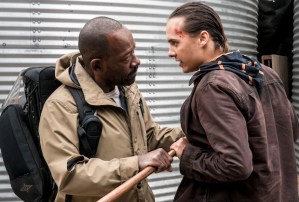 TVLINE | What does Nick’s death do to Morgan? Both of them acknowledged that Morgan could have kept Nick from killing Ennis if he’d wanted to.
CHAMBLISS | Morgan is definitely going to carry a sense of responsibility going forward. He left [The Walking Dead’s] Heaps in the premiere wanting to isolate himself, because he feared that getting close to people would open him up to feeling the pain of loss, which he feared might drive him down the path to losing his mind again. So he thought he’d found a way to live his life, which was essentially to put his walls up. He thought that would protect people and protect himself most of all. But this is really an episode where he kind of learned the price of isolating himself. In that moment, as you said, Nick said, “You could stop me if you wanted to.” It was almost like Nick was hoping he would stop him, but Morgan didn’t, because he was more concerned with protecting himself. And ironically, because of that, Nick wound up losing his life, and that’s something that Morgan’s going to have to carry going forward.

TVLINE | As I’m sure you know, fans are afraid that Madison is dead since she wasn’t with Nick, Alicia, Lucy and Strand when they met Al, John and Morgan. But TV logic dictates that since one original cast member was just killed off, the rest are probably safe for a while. What do you say to that?
CHAMBLISS | We would say — and this sort of speaks to Nick’s death, too, even though he died in this episode — that there is still more story to tell in the dual narratives that we’re telling. We don’t want to give away anything that’s coming, but there’s definitely a lot more story to tell in the flashback. 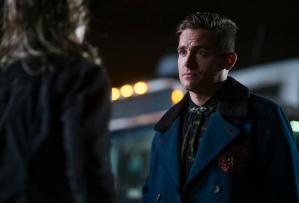 TVLINE | Is it safe to assume that Ennis’ murder will heat up the cold war that’s been going on between the diamond denizens and the Vultures?
GOLDBERG | I would just say there’s a lot more story to tell with the Vultures. Ennis’ death is not the last we will see of them.
CHAMBLISS | Also, Nick’s death and Ennis’ death really do serve as a possible turning point. This could be the thing that makes Alicia, Strand and Luciana realize that whatever their dark mission is might not end the way that they want it to. This may be the wake-up call. Then again, it could go the other way. Those are questions that they’re going to be struggling with going forward.

OK, readers — your turn. What did you think of “Good Out Here”? Were you surprised that Nick was killed — and that Charlie did it? Hit the comments.