Quantico‘s revamped core team gains a few new members in this week’s episode, just in time to thwart a hate group’s attempt to Make America Great Again. And while that’s important and all, you’ll have to pardon me if I’m fixated on Ryan in this episode, because dude has LAYERS.

Like we saw in Jake McLaughlin’s excellent performance in the ambulance in the Season 2 finale, Ryan is a character who’s got a lot going on under that normally stoic surface. During the hour, we get two glimpses into that inner turmoil; the group-dynamic complications they hint at certainly are intriguing. (So intriguing, in fact, that I couldn’t help but ask showrunner Michael Seitzman about them. I’ve included a bit of our conversation later on in this recap.)

Read on for the highlights of “Fear and Flesh.”

STEAK CHARMER AND THE SUPERBUG | Meet the newest members of Owen’s team: Quantico cadets Celine Fox (a Cirque du Soleil performer and anarchist — yeah, really) and Jagdeep “Deep” Patel (a nerdy M.D./Ph.D). Why newbies instead of seasoned agents? Alex doesn’t trust the FBI. Deep and Celine show up just before Owen gives everyone their first official assignment: Figure out why almost all the patrons of a restaurant named Steak Charmer (ha!) in Bilton, N.Y., were exposed to (and many died of) weaponized tuberculosis the night before.

Alex, Harry and Deep go to the site, where the CDC confirms that someone engineered the bug to act swiftly and harshly. It should be noted that most if not all of the restaurant’s clientele was black — as is the one girl who ate at the establishment on the night in question but isn’t sick at all. Deep points out that they’ve got to find the girl, and quickly: Even though she’s not ill, she is carrying the disease — and her natural immunity could make her a good place to start in terms of a vaccine.

Gracie, the 12-year-old in question, is feisty and doesn’t like it when Alex & Co. pull her off the bus that was supposed to take her to Philadelphia. The CDC wants to transport the girl to Maryland for testing, so Deep, Harry and Alex tag along to keep her safe — if someone wanted to make that many people sick, they reason, that same person probably doesn’t want Gracie to aid in finding a cure.

Along the route, Gracie asks about her grandmother (who is dead) and Alex and Harry make her believe that the old woman is fine. NOT COOL, GUYS. But there are bigger problems at hand when some guys wearing ski masks run the van off the road and start shooting at it. Knowing that she’s exposing them all to TB, Alex breaks Gracie free from her quarantined area to keep her from getting shot… then tells Deep to set his watch, because they’ll all probably be near death in about 12 hours’ time. (Ooh, I wonder what alarm tone he used to remind him of their near-certain death?)

‘IT FELT LIKE IT WAS VITAL’ | Meanwhile, back at team headquarters, Owen introduces Ryan to Mike McQuigg, an FBI agent who’s been under deep cover with a white supremacist group for two years. Owen wants Mike to bring Ryan into the organization, also undercover, but both men balk at having to work together. Fortunately, Owen is their boss, so they can’t do a damn thing about it. Owen, Jocelyn, Shelby and Celine also surmise that there’s some link between the group and a billionaire named Warren Renway, who has espoused racist sentiment in the past — especially because his company is rumored to be created the technology that weaponized the TB. 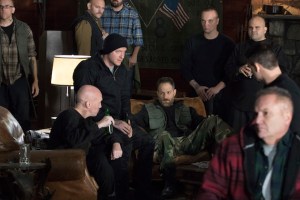 Ryan’s entrée into White Power Central or whatever the heck the stupid, dangerous group of stupid, dangerous people is called goes pretty well, but his initiation involves beating the snot out of a random person of color outside a convenience store. Knowing that Ryan won’t be able to go through with violence against an innocent stranger, Owen (who’s tailing his agent) quickly works it so that he is the random person of color Ryan has to assault. “Make it look good,” he whispers as Booth tries to contain his surprise.

So Ryan does, even though giving his boss a beat-down nearly brings him to tears. The way Ryan seems to be losing control of himself and his emotions while punching Owen stuck with me. When I spoke with EP Seitzman about the scene, he said that he’d long suspected that McLaughlin “had a much deeper well” from which to pull, and he made sure to be on set the night that McLaughlin and Blair Underwood filmed the fight. “As you can imagine, it was a very hard scene for both of them,” he said, adding that the actors hugged after shooting was done. “What we discussed on set was, you have to see how painful this is. And you see it… It felt like it was vital. It was really important, and they felt it.”

Anyway, Ryan’s performance is convincing enough for the hate group’s leader, Damon, who rewards him and Mike by injecting them with a vaccine that will protect them against an upcoming bioterrorism attack. Oh goody!

WHAT I DID ON MY CIA VACATION | Harry, Alex and Deep take Gracie to a cabin in the woods — thanks to an assist from Shelby — and await help. They also finally tell her that her grandma is no longer among the living, news that she (naturally) doesn’t take well. During some downtime, Harry presses Alex to talk about her time away. She tells him about Andrea and Isabella, saying she loved the peacefulness of their little pseudo-family. “Peaceful lives are for other people, Alex,” he says quietly, and she agrees. Then she starts coughing up blood.

No time to worry about that, though, because Damon’s group has tracked Gracie (via cell signal) to the cabin. Shots are fired. The bad guys are conquered — but not before the little girl takes a hit. 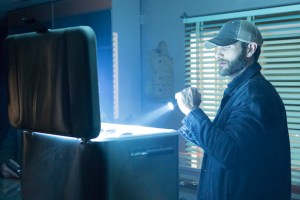 At the same time, Ryan breaks into Damon’s office to find out where the bioattacks are going to take place. And when Damon catches him in there and is about to execute him, Mike surprises the group’s leader and kills him. Ryan sends some intel back to HQ and heads for the woods with Mike; that’s where they meet up with Owen and his men, who succeed in shutting down the compound… but not before one of the crazies escapes with a vial of virus.

There’s a whole process to figure out where the man is heading, and it involves the billionaire — who, of course, is affiliated with the group — but Owen’s team eventually is able to track the man to a soup kitchen in New York City and put the kibosh on his attempt to repeat the restaurant massacre.

WHILE YOU WERE SLEEPING | Meanwhile, Deep is forced to do minor surgery on Gracie while Alex and Harry await a medevac helicopter. All four eventually are rescued, taken to a hospital and treated with a vaccine engineered from the girl’s blood. While Alex sleeps in her hospital bed, Ryan sits by her side and laments that she wasn’t supposed to stick around after helping him save Shelby in the season premiere. Then — in a move that is either sad, hot, creepy or a little of all three — he moves to kiss her on the lips while she sleeps. She wakes up and forcefully says, “Don’t ever do that again,” and he’s instantly embarrassed and apologetic. Oh, and Harry saw everything from where he was watching at the door.

Everyone comes by to check in on Alex, which means that she’s forced to watch Ryan embrace his wife just moments after he tried to plant one on his ex. Fun! Alex is distracted, though, by the arrival of Mike, who has shaved off his neaderthal beard and is ready to join the team full-time.