The Americans celebrated an unseasonably chilly Thanksgiving this week… but did we witness a thaw in Philip and Elizabeth’s cold war?

Things start out very ugly when Philip confronts Elizabeth about killing Gennadi and Sofia in front of Ilya — she insists she didn’t see the kid at first — and tells her he’s not taking Kimmy to Bulgaria. She doesn’t pull any punches, cruelly accusing him of just wanting to have sex with Kimmy: “You weren’t getting enough action here.” But he gets the final word when he reveals he warned Kimmy about entering any Communist countries, essentially torpedoing Elizabeth’s mission. And yeah, she’s not feeling too lovey-dovey towards her husband after that. 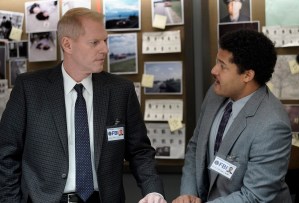 Henry can sense the marital tension when he returns home for the holiday; he notices Elizabeth is sleeping in Paige’s old bed, and when Philip uncharacteristically loses his temper during a slot car race, he asks his dad, “Is it Mom?” Philip assures him everything’s fine… but it might not be for long. Aderholt calls Stan into the FBI vault to tell him there’s a break in the Russian spy case: They got an engineer at a Chicago plant manufacturing those radiation sensors to confess he’d been recruited (sexually, that is) by a male Soviet asset. They’re using him to collect intel on the Russians, and Aderholt urges Stan to rejoin the counterintelligence team: “We’re really close… it’s gonna happen fast.” (In the next four episodes, most likely!)

Elizabeth is working on it, too, from the other side: Claudia got a distress call from the Russian spy in Chicago, who now knows he’s under FBI surveillance. “See if you can get him out,” Elizabeth is told, so she packs a bag to fly off to Chicago — even though her two kids are home for Thanksgiving. When Philip tries to stop her, she lashes out at him, saying she’s going there to save “someone who still gives a s–t” and telling him to take his touchy-feely self-help talk and shove it. (We’ll save you some leftovers, dear!) Paige wants to tag along, but Elizabeth just hugs her goodbye — and didn’t it kind of feel like it might be for the last time? 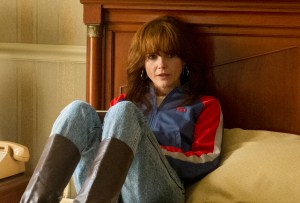 At Thanksgiving dinner with Stan, the Jennings make up an excuse that Elizabeth is stuck in Houston on urgent travel-agency business, and Stan offers up an uncomfortably patriotic toast, commending President Reagan for standing firm against those “who wish us harm.” Meanwhile, Elizabeth is alone in a Chicago hotel room, wearing yet another wig, on yet another spy mission that she admits to Marilyn has a “not great” chance of succeeding. She randomly calls Henry from a pay phone to chat about classes and books, and it must be the most she’s spoken with her son in months. Afterwards, Henry tells Philip it was “weird,” adding: “I just really don’t understand why she’s so unhappy.”

Philip searches through a number of top-secret spy compartments — to the pensive strains of Tears for Fears’ “Ideas are Opiates” — trying to understand the wife he’s lost touch with. He pens a note in invisible ink and drops it off for Oleg to find and decode, but we don’t see what it says. Instead, we watch Philip call Elizabeth from a pay phone, asking her if everything’s alright. “Not really,” she admits. This mission is a toughie, and she could use “more help.” He tries to get her to forget it and come home, but that’s never going to happen, and they both know it. So he decides to jump back in with both feet, and tells her to “sit tight… I’m on my way.”

* Elizabeth also spent some time hanging out in movie theaters and getting close to Jackson, a college-age film buff who’s interning for Senator Sam Nunn. They bonded over art-house cinema, and she offered to maybe get him a fictional job at her fictional lobbying firm. Is Elizabeth going to get revenge on Philip by bedding someone as young as Kimmy?

* So that mention of the heist film Rififi having a scene in it that’s 28 minutes of silence: That was a wink-wink reference to the infamously silent digging scene in the Season 5 premiere, right? Guess we should be thankful that one was only 12 minutes.

* Loved Mail Robot barging into the middle of Stan and Aderholt’s elevator conversation. Too late to get a Mail Robot spinoff?

* Elizabeth didn’t murder anyone this week, but I did wince a little when Philip’s financial crunch forced him to fire their loyal travel-agency employee Stavos. But Mr. Philip!

* My ears perked up when Aderholt said they were looking into Russian Orthodox priests as a possible connection to the Soviet spy network. Uh-oh. Could the priest who united Philip and Elizabeth in marriage end up being their undoing?