Warning: The following contains spoilers for Tuesday’s Season 5 premiere of The Americans.

Can you dig it, The Americans fans?

FX’s riveting spy drama capped its Season 5 premiere with an unbearably tense sequence: Over twelve virtually silent minutes, Philip, Elizabeth and friends snuck onto a U.S. military facility to dig up the infected body of William, the bio-weapons expert who killed himself last season with a lethal virus. They did succeed in slicing off a flap of skin from William’s corpse… but KGB informant Hans stumbled and fell onto the body, exposing himself to the virus. Elizabeth assured him it was fine — before shooting Hans in the head and rolling his body into William’s coffin.

And that’s not all the hot Cold War action we witnessed in the Season 5 opener. Philip and Elizabeth are now posing as an airline pilot and stewardess, and have enlisted a Vietnamese teen spy to help them infiltrate a family of Soviet immigrants; Elizabeth tried to toughen up a traumatized Paige by teaching her self-defense; and Philip’s long-lost son Mischa is slowly making his way from the USSR to America to find his dad.

TVLine sat down with The Americans showrunners Joe Weisberg and Joel Fields to discuss Hans’ shocking demise (it’ll haunt Elizabeth for a while), why the Jennings are spying on that Russian family, and when we can expect to see Mischa reach American shores. So grab a shovel and let’s dig in:

TVLINE | Let’s start at the end, with the big dig: What went into the decision to shoot that extended, silent scene and let it linger for so long? Did you want viewers to feel as exhausted as the characters do?
JOEL FIELDS | That’s actually the thing. We were less concerned about the mystery of what they were doing, because we figured most of the time, our audience is wondering, “What are they doing?” [Laughs] And then they’ll eventually catch up to it. But yeah, I think what we were looking for was… to be as exhausted as they are. To not do a stylized version of digging a hole where you spare the audience from the exhausting, exacting work of digging a hole, but to really show how grueling that would be. Obviously, we’re not going to spend eight hours with them, which is probably what it took. But we wanted to spend enough time to convey that feeling. It’s a long one. 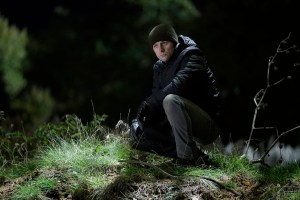 FIELDS | Not to mention possibly exposing others.

TVLINE | So it was a mercy killing on Elizabeth’s part?
WEISBERG | No question, it was an act of mercy. Horrible and painful to deliver.

WEISBERG | You can feel bad for Hans, too. [Laughs] But this is classic Elizabeth Jennings: What she’s doing is horrible, painful, terrible — and heroic, right? It’s putting your buddy out of their misery. But it’s the most horrible thing you’ll ever have to do. And of course, there’s a whole other argument to be made of, “Why did she ever put Hans in that position?” That it’s her fault for ever recruiting Hans. I don’t think her conscience is free of that side. You’ll see some scenes coming up that speak to that. 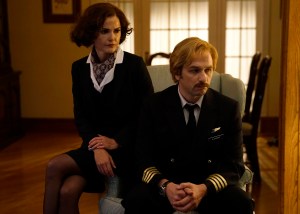 TVLINE | Philip and Elizabeth are now posing as an airline pilot and stewardess, with this young guy pretending to be their son. Where did they find this teen spy?
WEISBERG | The KGB has a very close working relationship with the Vietnamese intelligence service. And so if they had a kid of that age available who was Russian, someone who looked like an American kid, they would’ve used that. But illegals aren’t a dime a dozen. So they didn’t have a kid of the right age, trained and ready to go, who could pass as an American. But their very close friends, the Vietnamese intelligence service, did have a kid in America of around the right age who they were willing to second to them, or let them use.

TVLINE | So what is Philip and Elizabeth’s ultimate goal with this mission, infiltrating this family of Russian immigrants? What are they trying to gain?
WEISBERG | We’ve done a lot of complicated stories; this is probably the most complicated one. And if you actually want to follow it, that’s asking too much. [Laughs]

FIELDS | But in a lot of ways, it might be our most real spy story to date. Because they’re actually not going into that family with a particular, singular goal. Their goal is to get close to the family and figure it out from there. The KGB is sufficiently concerned about what’s going on with the U.S., in terms of what they may be doing to Soviet agriculture, to want to know what this guy is doing here. And just that is enough. The mission will unfold as they find out more.

WEISBERG | And there are some big, scary red flags in that first episode. The fact that the CIA snuck this guy out of Moscow, and he’s working with them… that’s f–king terrifying.

FIELDS | You don’t do that for nothing.

WEISBERG | He’s not a nuclear scientist, right? He’s not a weapons designer. There’s really no reason you would want that guy, unless they were somehow going to attack our food supply. So: “Philip and Elizabeth? In you go! Figure that the f–k out, and then whatever it is, stop it.”

TVLINE | And Philip’s Russian son Mischa is making a very long journey to America. Can we expect that to be a slow burn throughout the season, checking in on him?
FIELDS | Have you met us? [Laughs]

WEISBERG | We don’t want to give too much away. It’s going to be a good story. And I think we’re comfortable saying it’s not going to be a fast burn. [Laughs] And in truth, it was not easy to get out of the Soviet Union. We did a lot of research about that. It would take time to pull it off.

Now it’s your turn, comrades: Give the premiere a grade in our poll below, then hit the comments with your thoughts on the Season 5 opener.