Elizabeth and Philip both did things they really didn’t want to do this week on The Americans — but patriotism is a helluva drug. 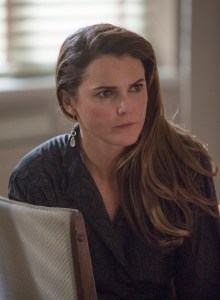 Elizabeth and her team are trailing Stan and his courier Gennadi, who’s holed up in a separate safe house from Sofia and their son Ilya. (Stan and Gennadi have a sweetly bromantic scene where they drink beer and watch hockey together.) Elizabeth was staying out of this one, but she finds herself tracking Gennadi’s movements, even getting dangerously close to a non-Stan FBI agent. She has her target in her sights… and after last week’s stumbles, we know how badly Elizabeth could use a win right about now.

So she scales Gennadi’s fire escape and climbs into his kitchen window, brandishing a knife. She hears a female voice: Sofia is there, too, and Elizabeth is forced to hide mere feet away from her. When Gennadi enters the kitchen, he spots Elizabeth and she viciously plunges the knife through his throat. Sofia walks in — and yep, Elizabeth has to kill her now, too, slicing her throat. She glances up, though, to see a TV on in the next room. It’s poor Ilya, oblivious that his parents are dead. Elizabeth sneaks out, and Stan is left to survey the damage done. Yet again, we’re seeing the very real human toll that the Jennings’ fun little spy missions are beginning to take. 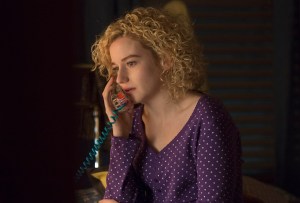 Speaking of that: Philip is forced to don his “Jim” wig again when Elizabeth comes up with a plan to blackmail Kimmy’s CIA dad. She wants Philip to meet Kimmy in Greece and take her to Bulgaria, where they’ll plant drugs on her and arrest her, forcing her dad to give up classified information in exchange for her release. “There has to be another way,” Philip pleads. “She’s just a kid.” But Elizabeth is adamant: She reminds him she hasn’t asked for much, but “I need this one.” So for the love of his country (and his wife), “Jim” puts the plan in motion — and when Kimmy hesitates to meet him in Greece, he (yikes) has sex with her to seal the deal.

Philip is clearly shaken after seducing a girl just a couple years older than his own daughter. (The far-away look in Matthew Rhys’ eyes while “Jim” and Kimmy are doing the deed is just devastating.) And after literally fighting with Paige — more on that in a second — and learning from Stan about poor Ilya, Philip doesn’t want to see any more innocent people get hurt. So he calls Kimmy as “Jim” and dumps her over the phone, telling her he can’t meet her in Greece after all. He even warns her not to go to any Communist countries while she’s there! “Something’s wrong with you,” a heartbroken Kimmy tells him. “I know,” he replies. “But I’m trying my best.” 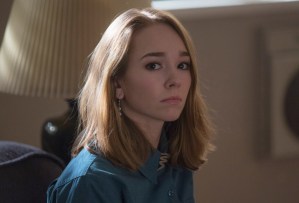 Elsewhere in “The Great Patriotic War”:

* Paige put her fighting lessons to good use when she got accosted by a pair of drunk jerks at the bar, wiping the floor with them. Elizabeth scolded her for showing off her skills in public, but Philip was more upset to learn she’s sleeping with a Congressional intern. So he dropped by her apartment, challenging her to a not-so-friendly father-daughter sparring match. He easily fended off her attacks, roughly trapping her in a chokehold before finally letting her go. A fatherly warning not to tamper with forces more powerful than herself?

* Oleg ran into Tatiana (remember her?), the KGB officer we met back in Season 3. She doesn’t believe Oleg is in the U.S. to teach, and still holds a grudge against him: “I know it was you. You told the Americans about my operation.” She’s been stuck in the same job for five years because of him, and we saw her ratting Oleg out to another Soviet guy, too. Move Oleg up a few spaces on your Americans final season death pool, guys.

* The episode title comes from the Russian name for World War II, which cost 27 million Soviet lives — including most of Claudia’s family, she solemnly revealed. But we also got to see Claudia get vodka-drunk with Elizabeth and Paige and reminisce about the men she’d slept with. Elizabeth shared the tale of a poor Russian boy who thought he was losing his virginity, when he was really just dry-humping the couch underneath her. To the boy!

* It was nice seeing Philip and Stan share a beer “like the old days,” right? Too bad they probably won’t be speaking by season’s end. If they both survive, that is.