Elizabeth’s magical spying skills seem to be failing her this week on The Americans, while Paige embarks on an undercover (ahem) mission of her own.

First, Elizabeth goes into cat-burglar mode to infiltrate a heavily guarded warehouse and get her hands on those damned radiation sensors. (Are these things really worth all this trouble?) But killing that guy last week didn’t help much: She still triggers an alarm and has to shoot more than one guard before escaping empty-handed. (I would tell you more, but the whole scene is so dimly lit, I’m not one hundred percent sure what I’m actually seeing.) Back at home, she and Paige debrief, and Philip can’t believe Paige is right back at it after the mess with Rennhull. He and Elizabeth have an awkward, hostile exchange, and afterwards, Elizabeth tells Paige her dad was once devoted to the Soviet cause, but “somewhere, something got lost.” 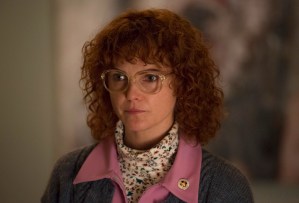 Later, Elizabeth’s ears perk up when she’s playing nurse to Erica the artist and her husband Glenn announces his plans to watch the World Series with his new Russian comrades. Elizabeth suggests that Erica (and she, of course) come along — and even has a surveillance wire sewn into Glenn’s Minnesota Twins jacket! Alas, the plan falls apart when Erica gets violently ill at the party and vomits all over the place, forcing them to head home early. Elizabeth listens back to the recording from Glenn’s jacket, but there’s nothing of use there before the early exit. Two missions, zero results. In bed with Philip, she admits: “I’m tired. All the time.” It feels like this season is underlining the fact that Elizabeth is working harder than ever — but she’s fighting a losing battle.

Paige has a little better luck, though: She tells her mom she met a boy named Brian who’s an intern for a congressman on the Armed Services committee. Elizabeth warns her not to date this guy just to pump him for information, but later, we see Paige flirting with Brian, and eventually going home with him. After they sleep together, she sits up in bed while he snoozes, eyeing his congressional ID badge. Maybe Paige is going to end up a little too much like her mother, huh? 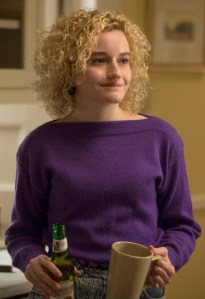 Elsewhere in “Mr. and Mrs. Teacup”:

* Hey, Kimmy’s back! She’s a junior in college now, and told her buddy “Jim” about her newfound coffee addiction before encouraging him to find some direction in his life. She’s headed to Greece with her friends for Thanksgiving, which means Philip won’t have access to her dad’s recordings leading up to the U.S./Soviet arms summit. Is “Jim” going to have to sneak in there by himself?

* Stan is on a collision course with Elizabeth and Paige, now that he’s back babysitting Gennadi and Sofia, and Claudia has declared Gennadi an enemy of the state for defecting: “He has to be dealt with.” Elizabeth put her spy friend Marilyn on it to keep herself and Paige out of it — but is there any way this doesn’t end with Stan learning about his neighbors’ true identities in soul-crushingly tragic fashion?

* The Jennings’ money troubles are about to take their toll on poor Henry: Philip had to break the news to him that he may not be able to go back to St. Edward’s for his senior year. Hmmm… any chance his passion for hockey leads Stan to introduce him to Gennadi?

* Miriam Shor has been pretty heartbreaking as Erica the ailing artist — and what she said this week about wishing she had spent less time on her art and more time with her husband could apply to Elizabeth, too, right?