Need to catch up? Check out our previous The Americans recap right here.

Even a taste of home can’t heal the fractures in the Jennings family on The Americans this week. (Beef stew can only do so much.) 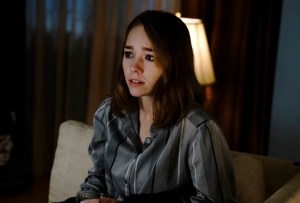 After last week’s disaster in the park, Elizabeth is left to scrub Rennhull’s brain matter out of her hair, and Paige is badly shaken up. Philip tries to comfort her, but Elizabeth just screams at her for leaving her position. Even after Paige apologizes, Elizabeth angrily orders her out of the house. Later, she softens, admitting to Paige: “I miscalculated, too.” But she’s still determined to do whatever it takes to keep her country safe, “no matter what happens to me.” She doesn’t want to die, but she’s not afraid to, either. (Yikes… maybe not the best thing to tell your daughter.)

While those two help Claudia cook up a traditional Russian beef stew, Philip is stewing over money troubles. He has to call Henry’s school to plead for more time to pay his tuition, and gives his travel-agency sales staff a manic pep talk that just freaks them out more than anything. Elizabeth brings him home some of the leftover stew, but he says he just filled up on kung pao chicken and lo mein. (So American!) Philip does enjoy one savory bite, though, before she dumps the rest down the garbage disposal — because they can’t just leave traditional Russian stew sitting in their fridge, can they? 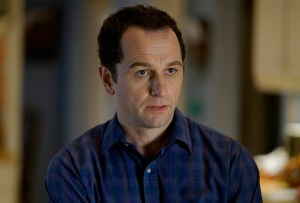 It’s the most tender moment we’ve seen Philip and Elizabeth have together this season, and she fills him in on how she and Claudia are introducing Paige to Russian culture. But then she remembers she’s in America: “I hate it,” she spits. Philip tries to tell her things are changing, the old walls are coming down — they’re even talking about opening a Pizza Hut in Moscow. But she doesn’t want peace with the Americans: “They want us to be just like them. I don’t want to be like them.” As the Cold War is winding down, Elizabeth is getting even more militant… and we see the return of the Sad Philip face, as he gazes at his wife while she sleeps.

So while Elizabeth heads out on yet another mission — this time, to make contact with a quality-control guy working on those elusive radiation sensors — Philip is forced to put on his wig and mustache. Elizabeth gets off to a good start, posing as a security auditor and quizzing the guy about the procedures used around the sensors. But when the guy says his girlfriend works in security, too, that pretty much signs his death warrant. Elizabeth is forced to choke the guy to death as Leonard Cohen’s eerie “Dance Me to the End of Love” plays, and Philip heads back to the park… to meet Oleg again. Think he has a few things to pass along about his wife? 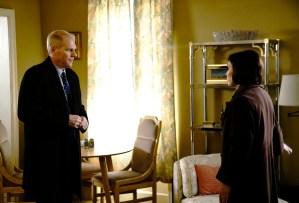 * Stan had a busy week: He had to pull Gennadi and Sofia off the job after learning Sofia was blabbing everything to her new boyfriend. (Gennadi still wants to work things out with her, though: “If we go, we go together.” Aw.) Then he paid a visit to his old pal Oleg, lightly interrogating him on what he’s doing in D.C. (Oleg claimed he’s teaching a class and “needed some time away from my wife.”) Oleg, in turn, blamed Stan for his run-in with the KGB; it was that tape of Stan and Oleg talking that got him in trouble. Stan left him with a stern warning: “Whatever you’re doing here… don’t.”

* The bigger news, though: During that chat with Stan, Oleg mentioned Nina (!). “Do you ever think about her at all?” he asked, and Stan admitted, “I think about her.” Oleg even thinks he sees her sometimes. Well, we won’t be getting a final-season Nina cameo, so I guess this is the next best thing.

* Elizabeth had another encounter with the Russian Orthodox priest who married her and Philip back in Season 5. She didn’t have great things to report about the state of her marriage — “He has his life, and I have mine” — but the priest would still like to see Philip again. Is this another Russian connection that’s setting up a possible return to the motherland for one or multiple Jenningses?

* Hey, we actually caught a glimpse of Elizabeth inside the travel agency! (It was only a few seconds, but still.) Stan thinks she’s out of town a lot because she’s working with “corporate clients.” Heh.

* Stan’s new wife Renee continued to be sketchy, announcing that she wants to become an FBI agent! (She admires Philip and Elizabeth and how they get to work together. Oh, if she only knew.) Stan shot her down, though, telling her she’s past the age cut-off for new agents. Harsh.