Need to catch up? Check out our previous The Americans recap right here.

Elizabeth’s wig count hit an all-time high this week on The Americans, as she experienced an alarming number of close calls — one of which got very bloody. 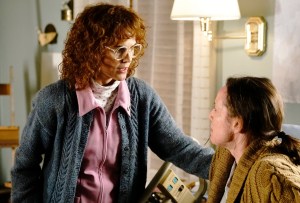 First, she goes curly redhead to play caretaker to ailing artist Erica, who is experiencing such severe pain, she’s contemplating ending her own life. Elizabeth offers to help her husband Glenn find a compassionate way to do that — via cyanide pill, maybe? — while managing to snap a few photos of Glenn’s secret government documents while he’s out of the room. Then she switches to a brunette bob to meet her State Department contact McCleesh, who throws her for a loop by suggesting they meet at the State Department cafeteria. Pulling that off requires Elizabeth to don yet another wig, but McCleesh does give her scoop on the upcoming U.S./Soviet summit, including gossip that “the President might be going senile.” (Quit being so timely, The Americans.) 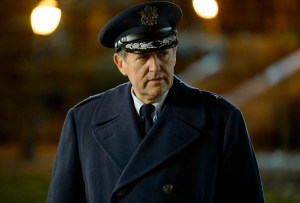 Elizabeth’s primary mission this week, though, is to reestablish contact with Colonel Rennhull, a KGB informant inside the Air Force we last saw way back in Season 2, and get him to hand over a lithium-based radiation sensor the U.S. is developing. When she approaches him, he’s less than thrilled to see her again — despite her fetching blonde wig — and refuses to help, telling her never to contact him again. She’s firm, though, and tells him to meet her in a nearby park and bring the sensor. But when she gets there, he doesn’t have it. He’s haunted by their last encounter, and feels used: “That’s not going to happen twice.” So she gives him one more chance to comply — and threatens to expose him and send him to jail if he doesn’t.

When Elizabeth arrives for their next meeting, though, Rennhull pulls a gun on her: “I’m not going to jail, and I’m not going to betray my country.” She gets on her knees, begging for her life, and tells him she has two children — and then she lunges, tackling him and knocking the gun to the ground. They struggle, Elizabeth has him in a chokehold, and he grabs the gun… and turns it on himself, blowing his own brains out (and all over Elizabeth). Paige runs up to make sure her mom is alright, and Elizabeth — dripping with blood and brain matter — yells at her to get back to the car and “follow the plan.” Ah, so this is what it looks like when things go according to plan? 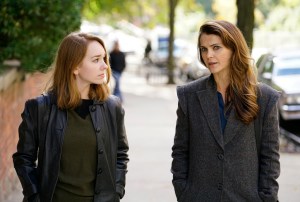 * Paige and Elizabeth had The Americans‘ version of The Talk, with Paige asking her mom: “Do our people ever use sex to get information?” (Ruh-roh.) Elizabeth tried to deny it, but admitted that “people may cross lines sometimes” and “the world is complicated.” Hmmm… this is going to come up again, isn’t it?

* Stan had to play marriage counselor as his courier Gennadi had a fight with his wife Sofia, threatening Stan’s undercover mission. But Gennadi held it together long enough to complete a very low-tech file transfer in an airport men’s room, hanging a bag on a stall door while a guy in the next stall used a funky X-ray-type machine to capture an image of what’s inside. (Why don’t they just use encrypted flash drives?)

* Matthew Rhys directed this week’s episode, which may explain why Philip was mostly on the sidelines, fretting over a lost travel-agency client. Was his long look at that ATM receipt, though, a sign that the Jennings are having money troubles?

* How bad is Rennhull’s aim that he couldn’t hit Elizabeth at close range when she lunged at him? Guess that’s why he’s in the Air Force and not an Army sharpshooter.

* Seriously, though, I counted at least four different wigs for Keri Russell this week. That’s gotta be a series record, right? (Meanwhile, her husband Matthew Rhys was probably giggling off-camera as he put her through this exquisite torture.)