Credit where it’s due: Sunday’s Fear the Walking Dead, only the second episode under the AMC drama’s new showrunners, was probably the series’ best since Season 3’s “The New Frontier.” In “Another Day in the Diamond,” which was elevated by Jenna Elfman doing truly lovely, subtle work in her debut as Naomi, we learned what — or, rather, who — had driven Alicia, Nick, Strand and Luciana to make prisoners of Morgan, John and Naomi in Season 4’s premiere. More importantly, the hour left us (or at least me) anxious to find out how our protagonists would manage to strike back against the show’s less violent, more patient version of the TWD’s Saviors. Read on and see if this recap doesn’t pique your interest the way this episode did mine.

‘I’VE GOT A TURNIP SITUATION’ | After a title card informed us that what we were watching occurred ‘BEFORE,’ we got a quick tour of the cush new life that Madison, Alicia, Nick, Luciana and Strand had been living for a year — to the day, as a matter of fact — inside a baseball stadium. They had a sprawling garden, cattle, coffee and even a handsome charmer named Cole for Strand to try much too hard to keep at arm’s length. The only sign of trouble on the horizon? A young girl named Charlie for whom Madison was enthusiastically transforming the dugout into a bedroom. Since the group had taken in the kid, she’d refused to say anything more about her MIA family than the direction in which they’d been traveling when… well, when whatever had happened, had happened. Other than that, she seemed like a bright, sweet moppet, sharing with Maddie her loathing of salmon patties and taking an interest in Nick’s gardening. Hoping to reunite Charlie with her parents, Maddie decided that, when she went on a run that day with Alicia, Strand and Lucy, they’d go outside of radio range to try and find them. Nick would, as he apparently now always did, stay behind. His experiences following the Season 3 finale had left him needing “to be in a place where he feels safe,” Maddie told Lucy. Besides, his crops had a weevil issue that threatened to become a matter of life and death. 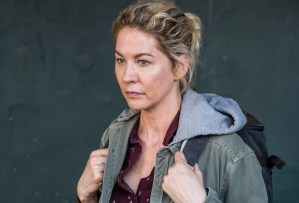 ‘THEY TOOK EVERYTHING EXCEPT THE LIGHTBULBS’ | Upon reaching their ghost-town destination, Madison and Alicia separated from Strand and Lucy to look for supplies. Only there wasn’t so much as a dreaded salmon patty to be found. There weren’t even any walkers. Alone with Lucy, Strand admitted that he’d never asked Maddie why she’d saved him even after what he’d done. “You don’t think it’s because you’ve always been one of the show’s more interesting characters?” Lucy should have but didn’t say. (“Ask her” was what Lucy actually said.) Nearby, Madison and Alicia happened upon the wreckage of a camp marked by a 457 flag. This, Maddie deduced, must have been where Charlie was orphaned. After Alicia moved off, Maddie was about to turn around and rejoin Strand and Lucy when Naomi appeared, gun drawn. Suspecting this was Charlie’s mom, Madison revealed that her group had just taken in a kid and invited the stranger to join their settlement. “I don’t have a kid,” replied Naomi, fighting back tears. “Please just stop.” In no time, Strand, Lucy and Alicia had Naomi surrounded. They meant her no harm, but still, she took flight, falling splat! through the roof of a storage tank full of oil and walkers. 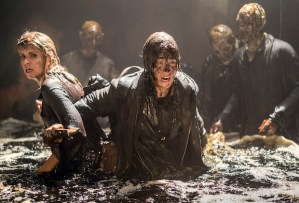 ‘IT’S BEEN A LONG TIME SINCE I’VE BEEN FROM ANYWHERE’ | Super eager to make a friend of Naomi, Madison jumped into the tank to help her fight off walkers until Strand was able to open the hatch and free them. Whew. Still on site that evening, Lucy found a copy of The Little Prince — perfect for Charlie, who desperately needed something new to read — and Naomi, clearly haunted by her past, apologized for having pulled a gun on Maddie & Co. Back at the stadium, Nick was burning rotten turnips when he heard classical music coming from somewhere in the distance and decided that, since it could be a signal from his family, he had to fight his fear and go outside to search for them. Mind you, he’d probably only driven 20 feet when flashbacks to traumas past caused him to crash his truck. As he staggered back toward the stadium, Cole picked off walkers from his sentry post and Maddie knocked one down with her truck. WTH is Nick doing out there? asked Lucy. “Just taking a stroll,” he replied. Once everyone was safely back inside the stadium, Madison didn’t have to tell Charlie that they hadn’t found her parents; she’d guessed as much. Even then, the youngster wouldn’t say a word about what had happened at her camp. 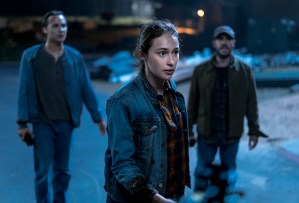 ‘WE’RE BOTH TAKING A CHANCE’ | While Naomi tended to Nick’s crash injury, he got out of her that she was a nurse. Later, Madison again invited the newcomer to stay. (Who wouldn’t? Seriously — Jenna Elfman couldn’t possibly be more likable in this role. I’d jump into a walker-filled vat of oil to save her!) “You don’t even know me,” said Naomi, ashamed about the whole gun thing. “And,” Madison answered her, “you don’t know us.” But if Naomi took a chance on them, she could take a shower — a hot one, even! Outside the gates, Cole was steering Nick’s truck back toward the stadium while Strand pushed when up rolled an intimidating number of all manner of vehicles. As they watched along with everyone else from the safety of the sentry post, a freakin’ David Lynch movie unfolded below them: A guy who resembled Andy Capp got out of a sedan, hopped on bicycle and began pedaling around the walkers while blaring classical music from a boombox. (Cue the Twilight Zone theme… ) Once he had a bunch of Beethoven-loving walkers following him, he pedaled into the back of a semi so that they could be trapped in the trailer and tagged the vehicle with a 12 flag (presumably for the number of walkers inside). “You picked one helluva night to join us,” Maddie cracked to Naomi as another guy whose named we’d soon learn was Mel (recurring cast member Kevin Zegers) plopped himself down on a lawn chair and cracked open a beer. 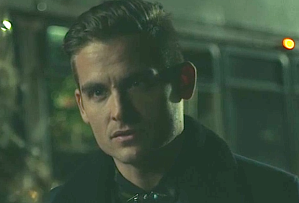 ‘YOU’RE NOT TAKING ANYTHING FROM US’ | “There a problem?” Maddie asked upon going outside to meet this obvious threat head-on. Nah, said Mel, offering her a beer. “We’re good.” As if Madison’s expression didn’t adequately convey her attitude of “Yeah, right,” she hastened to mention that just inside the stadium were a lotta people with a lotta guns. Mel tried to act offended by that “helluva welcome” — till Maddie said she’d seen what they’d done to the camp with his flag on it. Aw, that wasn’t their doing, he insisted. “We had to clean up their mess.” And Team Maddie had a bit of a mess of their own, he added — Nick’s crops had weevils. Wait, what? How did he know that — and how did he know Nick’s name? “C’mere, kiddo,” said Mel, calling to Charlie and sending a dagger through Maddie and Nick’s (and our) hearts. She’d been feeding Mel info (and this wasn’t the first time she’d done it, either). There was a natural cycle to a place like the stadium, Mel explained, and that cycle was about to run out on Madison. So her group could either fork over their s— and join his, or his group would just wait till her crops and then her friends died, then they’d still take their s—. “That’s not a threat,” he insisted. “That’s just the way it goes.” Maddie’s response: No freakin’ way. She’d lived like him before, and she wasn’t going back to it. OK, said Mel. Whatever. “You just haven’t been tested yet, but you’re about to be.” And when she failed that test, he’d be out in the parking lot, patiently waiting. 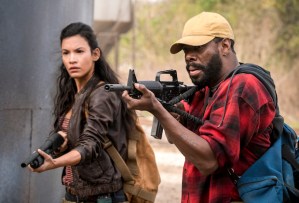 ‘YOU’RE WITH THEM’ | As the episode neared its conclusion, we saw the weevils rot Nick’s veggies quicker than the walker infection does people. Nevertheless, Madison kept working on a bedroom for Charlie. Everyone else joined in to help, too, maybe to distract themselves from the lack of ingredients for their salads. Lucy left the stadium to drop off within Charlie’s line of vision the copy of The Little Prince that she’d picked up for the baby-faced traitor. And then… then we cut to ‘NOW’ and the spot at which the Season 4 premiere left off, with Morgan, John and Al on their knees before their captors. When Lucy discovered a familiar flag in the strangers’ possession, she assumed they were with them. “With who?” asked Al. “The Vultures,” replied Strand. (And as villainous names go, that’s right up there with TWD’s Wolves or Whisperers, no?) If the flag wasn’t Morgan, John and Al’s, then Strand, Lucy, Alicia and Nick wanted to be taken to the spot where the trio had found it. And off they went, bringing to an end a particularly strong episode. Or at least I thought so. What did you think of “Another Day in the Diamond”? Jenna Elfman and Kevin Zegers’ debuts? This semi-new iteration of Fear TWD? Hit the comments.