A bigger Garbo fan than we ever realized, The Walking Dead’s Morgan, making his Fear the Walking Dead premiere in the spinoff’s Season 4 premiere Sunday, adopted the mantra, “I want to be alone.” But, at every turn, that proved to be much easier said than done. Read on to find out how he left behind his old pals; how, whether or not he meant to, he made the acquaintance of some new friends; and, finally, who appeared to have been transformed into, if not Big Bads, badasses.

‘MAYBE, SIR OR MADAM, YOU ARE NOT THERE’ | “What’s Your Story?” kicked off with gunslinger John Dorey (new series regular Garret Dillahunt) taking a break from reading Love Story to call out to the stranger he thought he’d heard nearby. “I haven’t used my voice in a while,” he admitted. “Am I talking loud?” Immediately, John came off as a pretty likable simpleton. (Anyone who watched Raising Hope knows that that’s one of Dillahunt’s specialties.) John also came off extremely eager to chat, as he didn’t reckon he’d spoken in a year or so. When not seeing how words like “potable” felt on his lips after being silent for so long, he offered his unseen visitor popcorn, books and the romantic story of how he’d fallen for a woman who’d shown up one day at his former cabin. It didn’t really matter to him if he was only talking to himself — if he told the story aloud, he figured he’d picture it, and he did. Finally, just as the stranger — Morgan — was about to stick a walker, John shot him (the walker, not Morgan, obviously) and asked the question that gave the episode its title.

From there, we flashed back to Morgan living in the Heaps that had once been the home of Jadis and the Scavengers. Aside from what you’d imagine the smell was, it was a pretty sweet pad, we knew thanks to the home tour in TWD’s “Still Gotta Mean Something.” Trouble was, people kept knocking on the wannabe loner’s door. Not Jehovah’s Witnesses, either. First, Jesus came by and asked him to rejoin civilization, then Carol did it, and just when Morgan had to be wondering if somebody’d hung a Grand Central Station sign on his entrance, Rick popped by. “You can hide, but you can’t run,” he said in a way that made it sound less like an ominous threat than it looks typed out. Rick reminded his first post-apocalyptic friend not only that he wouldn’t be there if not for Morgan but that “a lot of people are here now because you helped me right at the beginning.” When Morgan remained unbudgeable, Rick left (somehow without insisting on a hug), and the crossover artist started packing. 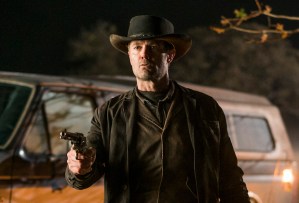 ‘YOU SOME KINDA KARATE MAN?’ | Headed out of Dodge, Morgan, tormented as ever, stopped at a crossroads to think and rethink about what his pals had said. Ultimately, though, he decided to keep going. (What he meant when he mumbled, “He’ll know what it is,” beats me.) Before long, he was driving cross-country and, when not driving, walking. So. Much. Walking. Seriously, his Fitbit had to have exploded at some point. When he happened upon an injured guy in a station wagon, he offered medical supplies, but the guy took a hard pass. Eventually, the plot caught back up to Morgan meeting John. Last name “Dorey,” he noted, “like the fish.” Had Morgan seen a woman with a fancy gun like John’s? (Didn’t Jeremiah give Nick a gun like that in Season 3? And if he did, does that mean the woman John loved was Madison?) No, Morgan hadn’t seen any woman, much less one with a fancy gun. Eventually, John, with his offers of taffy and a chance to sleep in his truck’s covered cab, convinced Morgan to hang around for the night. But, given Morgan’s mantra, he skedaddled after his companion nodded off and ran afoul of some baddies, led by a dude named Leland.

Morgan was insisting that he was just passing through when John showed up and “saved” him — which only got them both in hot water. Next to ride to the rescue was a woman named Al, short for Althea (new series regular Maggie Grace). When Leland wouldn’t trade Morgan and John for a case of Cuppa Noodles and some Pall Malls, she pulled the lever on her SWAT truck, revealing a row of machine guns pointed at the villain and his cronies. If that was the way it was gonna be, why’d she even act like he’d had a choice about what to do? “There’s always a choice,” she replied. “This just happens to be an easy one.” Once Al, John and Morgan were on the road, she made it clear that she hadn’t rescued them out of the goodness of her heart (though she did sorta radiate goodness). “You guys owe me,” she said. Owed her… what, exactly? Their stories, it turned out. She’d been a journalist and was recording people’s post-apocalyptic histories. John was amenable and readily told the tale of his meeting Laura — presumably no relation to TWD Savior Laura — the woman he’d loved and lost but was sure he’d find again. Morgan… uh, he was less amenable to the point of being fairly huffy. 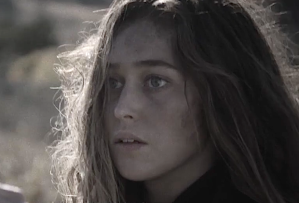 ‘THAT IS SOME UGLY MUSTARD’ | As Morgan began to make tracks away from his new acquaintances, John chased after him with a much-needed present: socks. (Not just any socks, either; colorful, funny ones like the kind you might get from your kid at Christmas.) Before you could say, “Who could possibly have seen that coming?” Leland had a gun trained on Al and was demanding her weaponized truck. Leaping into action, Morgan and John helped return her favor by saving her from the baddie and his goons. True to form, Morgan refused to kill, and was shot in the leg and damn near bitten by walkers as payback. Once the trio were safely back on the road, the villains reduced to Walker Chow, Morgan asked what the 51 flag Leland’s goon had used as a weapon meant. Al didn’t know — she’d seen the markers here and there but never had anyone to ask but the dead. John called them the passed, he chimed in. Walkers, added Morgan, warming enough to Al to consent to be interviewed. Mind you, it was no Barbara Walters special. Though he discussed briefly where he’d come from, he refused to say why, exactly, he’d left behind the good people he’d been with. Turning the tables, he asked how she got the SWAT van. And why was she recording these interviews? Before he took off again, she made a last plea: “Tell me one real thing, and we’ll call it even,” she said (even though technically they were probably even when Morgan and John saved her from Leland). “I lose people,” Morgan answered, “and then I lose myself.”

So off Morgan went, hobbling down the road on his injured leg, an “Oh, this will go well” meme just waiting to happen. Shortly, he saw in the distance a walker with Jesus’ hairdo, if not Jesus’ hair’s body or silky sheen. Chasing after the walker, Morgan did what people with injured legs so often do, and fell on his face. As other walkers heard the dinner bell ring and approached Morgan, John saved his reluctant friend and helped him catch up to the mystery walker. When the zombie at last turned around, it was, I believe we were to presume, the injured, now-deceased guy from the station wagon. Anyway, Morgan reluctantly rejoined John and Al — but only till his leg was healed, he hastened to add. Down the highway, they came across a young woman who appeared to be injured… Alicia! “There are bad people here,” she said, rocking a half-crazed look. And, as Nick, Luciana and Strand emerged from hiding, guns drawn, it looked like she was one of ’em!

So, what’s your first impression of the “new” Fear TWD and its cast additions? Are you liking/do you think you’ll like Morgan in this environment? Grade the Season 4 premiere below, then hit the comments.