In Thursday’s particularly timely Grey’s Anatomy, ICE sent a chill through the halls of Grey Sloan by sending an agent to the hospital in search of a certain surgical intern. Which one? And why? Was the young doctor in question in danger of being deported? Read on, and we’ll answer not only those questions but reveal what happened when April’s recently-widowed ex-fiancé returned with his ailing daughter, and Alex’s young patient begged to check out before she, you know, checked out.

‘SHE’S NOT A FAKE-YOUR-OWN-DEATH KIND OF PERSON’ | As “Beautiful Dreamer” began, Meredith showed up at work with two out of three kids, Arizona suggested a double date with Carina, DeLuca and Sam (aka the surgical intern his sis referred to as a stalker), Jackson accused Maggie of being petulant in the wake of April’s jumping-him comment, and Amelia reassured Mer and Maggie that Richard would be OK when Olive passed. Amelia was more worried about Alex, who was upset that Kimmie wanted to check out. “It’s not your fault,” the youngster told him. But “I want to see Broadway before I die… And I want to sing” on a street corner, if need be. Undaunted, Karev told her to hang tight and they’d discuss it later — over ice cream. In peds, Arizona treated Matthew’s daughter, Ruby… until he admitted that he wasn’t cool with her being his kid’s doctor. Overhearing Robbins forbidding Jo from taking her interns into the room, April was dying to enter the room to offer her support. Nearby, Meredith was teasing Bailey about how everyone was calling her colonoscopy tool the tail-blazer rather than the trailblazer when up strolled ICE Agent Fields with his ominous request to speak with a surgical intern. “Which one?” Grey and Bailey asked in unison.

Off that tense moment, Meredith and Bailey pulled Sam aside and instructed her to stay calm. Good luck with that. “I’m a Dreamer,” cried Sam. “I’m here under DACA.” She could only be deported, she said, if she broke the law, which, to be clear, she hadn’t. But since a friend of hers had been deported in a similarly sketchy scenario, she felt that she had to run. Covering for her, Bailey lied to Agent Fields that Sam was in surgery. “I will wait,” he said. Of course, he would. Next, Mer asked Helm for a favor — and she needed it so badly that she didn’t call her Hellmouth. That favor? Get DeLuca, fast. Why? Mer’s solution was for the young couple to get hitched at once. Alas, it wouldn’t work for Sam; marriage wouldn’t keep a Dreamer in the country. While Fields, cool as a cucumber, attempted to intimidate Bailey, she noticed that his pulse was racing. Nonetheless, he was disinterested in being examined. Meanwhile, Jo advised Sam about how to fake her death and start over with a new identity. No dice, said Sam, who had worked too hard to be who she was. While she weighed her non-options and Fields underwent an EKG, Amelia asked Owen to help save her favorite intern. No can do, he said (a bit dismissively). At his wit’s end, DeLuca accused Carina of sicking ICE on Sam. (Ouch.) After Maggie explained to Fields that he was a high risk of a heart attack and recommended a cardiac catheterization, Bailey asked him again if Sam had broken the law. Apparently, she’d run a red light — a red light, for crying out loud! If she wound up being sent back to El Salvador, Bailey warned, she’d probably be stripped of her medical credentials. “We should run,” DeLuca decided. Uh-uh, Mer countered. “If you run,” she said, “you’re a criminal. Don’t give them that.” 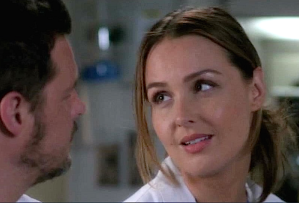 ‘IF YOU’VE DEMONSTRATED LOYALTY TO ANYBODY, IT ISN’T ME’ | Seeking help with Kimmie’s case, Amelia reached out to Rebecca Froy, a doctor at another hospital — who abruptly shut her down upon her mention of the name Harper Avery. In no time, Amelia got Jackson involved, and Rebecca insisted that, quite literally, she couldn’t say why she was bailing. And to underscore her point, she hung up on him. Off that non-conversation, Jackson learned from his mom that Rebecca had been involved in a lawsuit with his grandfather. At the same time, Maggie continued giving her new boyfriend the cold shoulder. When Jo caught Kimmie and her grandmother leaving the hospital, the teen asked Alex’s fiancee to tell him she’d been smiling when she said to thank him for her. Rather than do so at once, Jo instead distracted him with wedding talk. (Hey, maybe we could at least get to see that engagement party.) Then, at last, she broke the news, sending him running off after Kimmie. Speaking of whom, to get her the help she needed, Jackson told his lawyers to waive whatever agreement Rebecca had made with Harper so that she could pitch in on the case — a twist that left Catherine looking worried. 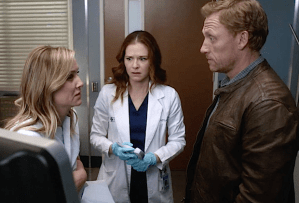 ‘ARE WE SUPPOSED TO LIE TO MOMS?’ | Hoping to help Matthew, April covered for Owen in the pit so that he could treat Ruby at Arizona’s request. Meanwhile, Arizona advised a mom in labor against a C-section. At the same time, she took every precaution for fear that the woman would follow in the tragic footsteps of Matthew’s late wife, Karin. “I don’t think it’s [Ruby’s] heart,” April told Owen, who heeded her advice to check some other possibilities. Turned out, the problem was the baby’s belly. “There’s a simple surgery” to make her right as rain, Owen assured Matthew, who admitted, “Nights are tough” without his wife. After Hunt mentioned to Matthew that it had been Kepner’s intuition that had led him to the correct diagnosis, the former couple crossed paths in the chapel, and they wordlessly prayed next to one another. 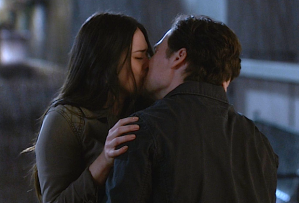 ‘YOU’RE NOT THROWING YOUR LIFE AWAY BECAUSE I HAVE TO’ | As the hour drew to a close, Arizona told Carina that they were done with their project — all they had to do was to always be prepared for a trauma. Wondering if she herself needed an emotional crash cart, Robbins asked Carina for (and received) reassurance that she wasn’t going to pick up and move to another country. Meredith presented Sam with a ticket to Zurich to continue her medical studies. “Dr. Yang is expecting you,” Grey added. Finding Alex, who apparently hadn’t found Kimmie, Jo told him that she wanted to have kids with him and take his last name, as she’d never had the surname of someone who’d loved her. Olive, poor Olive, finally drew her last breath, reducing Richard, poor Richard, to tears. (And you know a scene is emotional when, even while fast and furiously typing a recap, it makes you misty.) Owen applied to foster a child. Sam tried to keep DeLuca from following her to Zurich by insisting that she was just what his sister thought she was — a crazy stalker. He didn’t buy it for instant, but they nonetheless shared one last kiss in the rain, and then off she went, tears running down her face in the cab. Just then, Maggie walked up and expressed her sympathy to her ex. Off that heart-tug, she ran to Jackson, talking a mile a minute, and got him to admit that he’d been protecting himself from all this drama by not mentioning April’s pass at him. Maggie had to stop thinking of herself as some awkward underdog, he insisted. She had all the power in their relationship. At last, he got through to her, and she shut him up with a kiss. From there, it was zippers unzipping, melting-into-the-couch time. And just as we were about to fade to black, Catherine revealed to Richard that “Jackson ruined us… We are ruined.” What. The. Hell?

So, were you surprised that it was Sam that ICE was after? Disappointed she’s gone? Hoping April and Matthew will reunite? Hunches about Catherine’s “ruination”? Hit the comments.