This week on Roseanne, Darlene’s “hell spawn” pushes Granny Rose over the edge.

While Episode 2 of the revival focused almost exclusively on Mark, the third installment is all about Harris. She’s pretty much teenage Darlene reincarnated… if teenage Darlene was a spoiled brat. She has no respect for anyone, especially Granny Rose, and Darlene is reluctant to be the disciplinarian. She defends Harris’ mess by insisting that her daughter’s too busy selling used clothes on Etsy to clean up after herself. 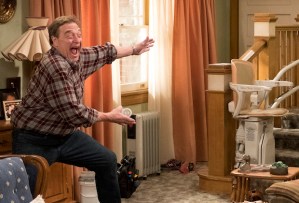 In the following scene, Roseanne returns home from work and her knee is acting up again. She walks to the freezer to retrieve an ice pack, but Harris has taken it up to her bedroom without asking. Dan says he has something even better, and invites his wife into the living room to reveal the newly installed Easy Climb 5000, an elevator chair he’s looted from the home of a recently deceased neighbor. Roseanne refuses to use it because it makes her feel old.

Afterwards, Becky comes over to do laundry, but Harris’ used clothes are sitting in the machine. Roseanne is upset, but Darlene isn’t concerned. She thinks her mother is overreacting, and offers to empty the washer on her daughter’s behalf. “When did you become such a pushover?” Dan asks. “You’re not the Darlene that we knew and loved, and quite frankly, feared a little bit.” She insists she hasn’t changed, but that parenting has evolved. She’s fine if Harris wants to refer to her as “Darlene” instead of Mom, and doesn’t bat an eye when the ingrate openly talks down to her in front of her parents and Aunt Jackie.

Later that night, Roseanne and Dan wake up from long nap, having slept from “Wheel to Kimmel.” Dan mentions that they missed all the shows about “black and Asian families” (aka black-ish and Fresh Off the Boat), and Rosie responds in an inexplicably dismissive tone: “They’re just like us,” she says. “There, now you’re all caught up!” (Seriously, what was that?!) She then gets up from the couch hoping that she’ll have access to the dryer that Harris has been monopolizing. Instead she finds that Harris has dumped out her clean clothes and is once again hogging the machine.

Roseanne is fed up, and takes her first ride in the elevator chair to go discipline her granddaughter. She makes it halfway up the stairs before Harris breezes past her and makes a beeline for the kitchen. She tells Granny Rose that she’ll take her clothes out of the dryer once she’s done eating her muffin, and Roseanne tells her to stop acting like an “entitled little b—ch” who thinks she’s better than everyone else. Harris fires back by calling G’ma a “stupid old hillbilly,” then gets what she deserves when Roseanne dunks her head under the faucet.

Darlene runs into the kitchen and she’s furious — not just with Harris, but with her mother. She tells her daughter to get her clothes out of the dryer and apologize to Roseanne. On her way upstairs, Harris drops a piece of clothing with a security tag on it, revealing that the “used clothes” she’s been selling are actually stolen. Darlene sits her down and asks what’s so important to her that she’d be willing to sell shoplifted goods, and Harris reveals that she plans to use the money to move back to Chicago. Darlene tells her kid that she’s not going anywhere before she turns 18 and grounds her for three weeks. 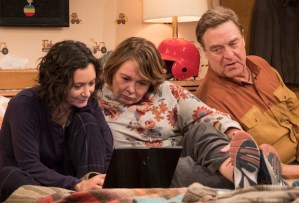 Dan and Roseanne eventually make their way upstairs, where Darlene, who is in the midst of seeing what else her daughter’s been up to online, admits that she was wrong to let her guard down. We then cut to our tag scene, which finds Roseanne putting a stop to Harris’ long shower by walking in on her and asking her to pass the soap.

What did you think of “Roseanne Gets the Chair”? Hit the comments to flesh out your thoughts. (Looking for our next recap? Read about Roseanne Season 10, Episode 4 here.)