Looking for our recap of the first Roseanne premiere episode? Click here.

The second half-hour of the Roseanne revival eschews Washington politics for gender politics.

In the episode, Mark — excited for his first day of school — comes downstairs to show off his outfit, which consists of a purple blouse and a skirt. What follows is a discussion between Darlene, her parents and Aunt Jackie, during which Dan makes his opinion loud and clear: He’s fine with Mark playing “dress up” around the house, but thinks he’d be better off wearing pants to school. Darlene labels her father a hypocrite, reminding him of all the years he allowed her to wear a Chicago Bulls jersey to class. Dan counters that he’s fine with girls who like basketball and boys who like sewing, but he thinks Mark is in for a world of hurt if he goes to school wearing a dress. 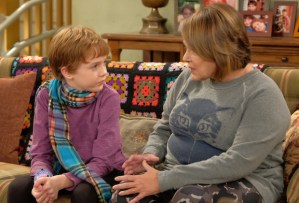 Afterwards, Roseanne insists to Darlene that they’re not bigoted, pointing out that they long ago came to terms with the fact that their daughter is — LOL! — gay. (The meta joke is funny because Darlene’s portrayer, Sara Gilbert, is gay in real-life.)

Granny Rose ultimately volunteers to take Mark to school, but first sits “Little Braveheart” down and asks whether he feels like a boy or a girl. He says he identifies as a boy, but wearing girls’ clothes “just feels like me.” She accepts his choice and tells him she’ll always have his back — and she proves it when they arrive at school (in a class taught by Darlene’s teacher from the original 1988 pilot!) and a young girl immediately calls Mark a “freak.” The name-calling inspires G’ma to address the class. She introduces everyone to her grandson and makes him out to be the next great fashion designer… a la T.J. Maxx. Before she departs, she asks everyone to “make the new kid feel welcome” and warns, “If you don’t, I have ways of finding out about it. I’m a white witch!” 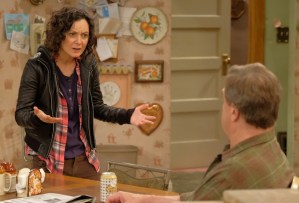 Later that day, Darlene returns home with Mark, who she retrieved from the principal’s office. He’s been suspended for the rest of the afternoon after showing up to school with a pocketknife, which was given to him by none other than his grandfather. Darlene scolds Dan for trying to make Mark more masculine, then heads upstairs to chat with her son. He explains that he offered the knife to a potential tormenter to stop from being bullied, and Darlene is positively heartbroken. She puts on a brave face and tells Mark that his classmates will eventually grow to accept him for who he is. The next morning, she packs him a pair of pants and a t-shirt, just in case, but he immediately removes them from his knapsack. He says his classmates will eventually tire of bullying him, and he’s not going to change his appearance to be accepted. Dan, overwhelmed with pride, pulls the kid in for a bear hug before sending him on his way. 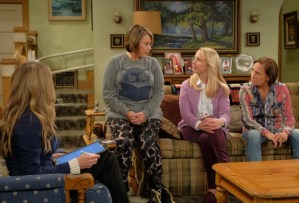 The other half of the episode focuses on Becky’s efforts to impress Andrea, who is on her way over to meet the family. Having already lied about her age, the Conners’ eldest daughter is now scrubbing the house from top to bottom, and asking that her mother put away any trinkets that make them look like white trash. When Andrea arrives, she surveys Roseanne and Jackie (aka Jacqueline) about the family’s extended medical history. Roseanne, meanwhile, makes a fool of herself when she asks Andrea about the surrogate process, convinced that Becky will have to have sex with her husband. After Andrea explains the concept of implantation, she promises Roseanne that Becky will get all the best medical care — and endure a natural birth for faster recovery. This is the first Becky’s heard about an epidural-free delivery, and she’s not so into it: “I don’t care how long it takes to recover,” she says. “I’ll take all the drugs you got.”

Grade the second episode of Roseanne via the following poll, then hit the comments to flesh out your thoughts. (Looking for our next recap? Read about Roseanne Season 10, Episode 3 here.)