Two-time Emmy winner Dana Delany enters the ring with Bull this Tuesday, where she is poised to lock horns with longtime friend Michael Weatherly.

In the episode “Bad Medicine” (airing Tuesday at 9/8c, on CBS), Delany guest-stars as Sylvia Banner, an AUSA (Assistant United States Attorney) whose proves to be a “hard-bitten” opponent for Weatherly’s titular trial scientist.

Banner is “bound and determined to imprison a young mother/physician who purchases thousands of vials of marijuana-derived CBD oil to treat her patients in Virginia, where the oil is illegal,” executive producer Glenn Gordon Caron previously previewed for TVLine. “Her tenacity and seeming heartlessness baffles Bull.”

TVLine reconnected with Delany to get the backstory behind her imminent Bull fight — including how it ties into the one-off role that led to her acclaimed China Beach run. She also weighs in on ABC’s public lament about cancelling Body of Proof.

TVLINE | I was just on Facebook looking at a picture we took at Body of Proof‘s Season 2 premiere party, and I’ve got to say that it’s one of my all-time favorites because, damn, we both look good.
That’s all that matters.

TVLINE | And neither of us has aged a day since.
Not one bit. 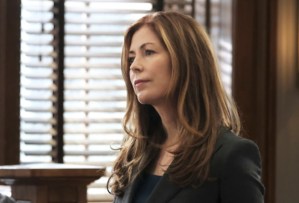 TVLINE | Tell me about AUSA Banner and the case that pits her against the estimable Jason Bull.
It’s so funny because one of the actresses on the show was saying, “I thought your character’s first name was Ausa….”

TVLINE | The logline was confusing.
Well, this came about because Michael Weatherly is an old friend of mine, and we have been wanting to do something for a long time. I had sushi with him the last time we were in New York and Glenn Gordon Caron had just taken over the show [for Season 2]. Michael, being irrepressible, immediately got Glenn on the phone and said, “We’ve got to get Dana on the show.” Glenn was like, “Hi, Dana.”

I wanted to do it because Glenn, who created Moonlighting, had given me a break a long time ago when I did one of the early episodes of that show. It was a huge thing in that it really put me on a path in my career. I got a series out of it, I got to be Magnum P.I.’s fiancée out of it, and I got to date a rock star out of it.

TVLINE | Which series did you get out of it?
John Young, the creator of China Beach, had seen that [Moonlighting] episode and wrote my name down on a Post-It and stuck it on a lampshade. [As First Lieutenant/Captain Colleen McMurphy, Delany went on to amass four Emmy nominations, grabbing gold twice.] 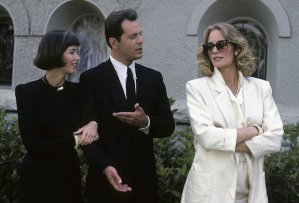 Delany on ‘Moonlighting’ in November 1985

TVLINE | That’s a great example of how there are no small roles. You never know what someone’s going to take notice, jot your name down on a cocktail napkin and then cast you on a great drama series.
Very true. So I felt like, “I’ve got to do that with Glenn again.”

TVLINE | When you were cast on Bull and we ran those first photos of you with Michael, I had this feeling that these are two people who probably know each other. In part because Michael knows everybody.
Michael does, but we’re both from Connecticut and we’re both kind of throwbacks. And nobody better steal our idea, but we have this show in mind called The Connecticut Psychos that we want to do.

TVLINE | I actually grew up in Stamford [Conn.].
Well then you know all about Connecticut. I’m from Stamford, too. I lived up on the Mianus River, off of Old Ridge.

TVLINE | Wait, did you also go to Westhill [High School]…?
I did. The first year that they opened, I was there. 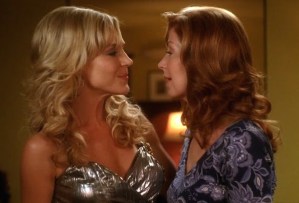 TVLINE | Last summer, I asked Julie Benz about roles that she wished she could have played longer. A close second to Angel’s Darla was Desperate Housewives. She said she would have loved to do a couple of seasons as your girlfriend instead of just a couple of episodes.
She was so good in that. She really was good. I so much enjoyed working with her. Julie is another one of those people that never stops working.

TVLINE | Well, I recently talked to David Boreanaz about just that, because he’s gone from Angel to Bones to SEAL Team without taking a breath. He says that’s simply how he’s wired.
See, I don’t like to do that. I need time off. I need to think about things.

TVLINE | Speaking of roles “gone too soon,” I feel like each year it becomes more evident that Body of Proof’s time of death was prematurely declared. Did you feel that show had another year or two in it?
I think it could have kept going. I’m always fine to move on, it’s just my nature, but I think ABC has been very nice about that. 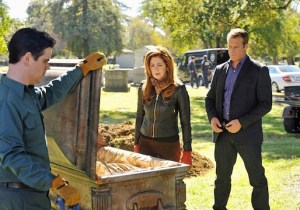 TVLINE | I was going to say, this is the first time I’ve spoken to you since [ABC president] Channing Dungey said that they lamented that decision — and back in October 2013, I believe, you predicted that ABC would regret it.
It was just pure business. It wasn’t anything personal. I saw the numbers, but I thought that was very big of her to say that. She didn’t need to.

TVLINE | What do you watch in your free time? Any shows that you’re fond of?
I’m still watching Homeland; I have not missed that. Definitely Handmaid’s Tale; I can’t wait for that to come back. I like the odd ones, the female-driven ones. I like Top of the Lake…. There’s so much now I don’t know how you guys do it!

TVLINE | I don’t know, either. There were 477 scripted shows last year.
It’s insane. I sit in front of the TV and think, “What am I going to watch?” and I can’t keep my head straight. I mean, I just watched the second season of Cardinal, this Canadian show, because Billy Campbell is my friend and he’s really great in that. I just find things through people I know.

TVLINE | The last time TVLine spoke to you, for Hand of God, you were kind of digging that shorter-season cable/streaming schedule. Is that where you’ll turn up next for your next steady gig?
I mean, you never know. I’m known to be picky. I pick things for various reasons but I would like that. I would like to do a short season.

TVLINE | Especially if it’s something called The Connecticut Psychos.
That would be perfect.