“You can swear,” she says, laughing, “which I embraced wholeheartedly.”

The series co-stars Ron Perlman (Sons of Anarchy) as Parnell Harris, a powerful judge who has a religious awakening — complete with visions and cryptic messages — soon after his adult son PJ unsuccessfully attempts suicide.

Delany plays Crystal, Pernell’s slick, politically savvy wife of many years. As the first season unfolds, we learn that Mrs. Harris does, indeed, have many reasons to detonate an f-bomb here or there. (And that the judge’s holy moment has deeper ramifications than even he realizes.)

Though the streaming site doesn’t censor its content, Delany says she soon found herself doing the job instead.

“You realize, ‘I don’t need to swear as much. I should maybe pick and choose,'” she tells TVLine. “I started eliminating swear words, because you want them to have impact when you do it.”

In advance of Hand of God‘s Sept. 4 premiere, we spent some time with the Emmy-winning actress. Topics of discussion included: Crystal’s own secrets, smoking pot (as research!), the possibility of Body of Proof and/or China Beach revivals and how Delany really, really likes the idea of a Desperate Housewives musical. Read on for more.

TVLINE | We don’t get a lot about the Crystal-Pernell relationship at the start of the season. Do we learn more as the series continues?
Yeah. What emerges, which I really found interesting, is the adult relationship that these are two people who are married a long time… I like that it’s a partnership. You don’t see that a lot, especially on television you don’t see that. You see the good, the bad and the ugly about their relationship. You see that there’s a certain respect and they like each other, but not always. That’s what I enjoyed evolving: how they needed each other.

TVLINE | A few episodes in, we learn that Crystal is hiding some secrets of her own from Pernell. What can you tease about that aspect of the character?
Just that Crystal is an animal. She’s a survivor. She’s always going to have a safety hatch. He doesn’t know about that. That’s part of her plan: I need to have my exit strategy at all times.

TVLINE | We get a lot about Pernell’s relationship with PJ, but not much about Crystal’s with him. Does that change?
That’s a really good question, and maybe it could’ve been explored a little bit more. I think that she can’t go to that emotional place. If she starts buying into his stuff… she can’t handle that. So she has to just keep moving forward. In her mind, she had a good relationship with him, and that’s all she’s going to hold onto: It was good, he’s dead, let’s keep moving.

TVLINE | Crystal keeps all of her feelings tightly in check — does she ever get an emotional release?
I can’t remember! [Laughs] I think that’s what pot is for!

TVLINE | I would not have picked pot for the drug of choice for Crystal, but she seems to enjoy it a lot.
I know!

TVLINE | I thought that was a surprising choice.
I thought that was surprising, too. I am so not a pothead. This is funny — it was so old-school Hollywood, because I had to go to the prop man and say, “Can you get me some pot? Because I need to try it. I don’t know what it’s like.” [Laughs]

TVLINE | How did that experimentation go?
Well I didn’t realize there were so many kinds of pot now, and he gave me the kind that’s kind of a downer. I went back to him and I said, “I didn’t like this.” And he goes, “Oh, you need the other kind. I’ll get you the other kind.” [Laughs] 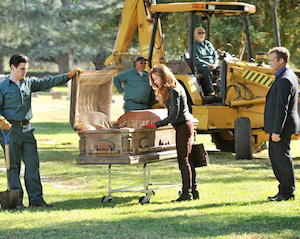 TVLINE | Body of Proof: Is it finished completely? (I think Michael Ausiello wants another shot at a guest spot.)
[Laughs] Yes, it’s done.

TVLINE | Do you have feelings about that?
No, it was time. I feel like we had a great run with it. It was so much work. I mean, I took a year off when we wrapped because it was so much work for me that I needed to get my life back. And that’s why I feel like this new model that Amazon’s doing — and so many places are doing — of 10 episodes is perfect. Because it doesn’t kill you, it’s good for the writers, it’s enough for the audience, it makes them want more, and you can explore other avenues as actors. I was doing The Comedians and this in one year, and you can do that.

TLVINE | Do you have anything lined up next?
I did this French miniseries [Une Chance de Trop], and so that’s sort of my next goal: to work in France more. It’s kind of been a dream of mine. I have a French tutor, and I have a French agent, and I’m going to Paris in a couple of weeks and it’s just been a dream.

TVLINE | Has there been any talk of a China Beach reboot/revival?
Well, it’s kind of a weird thing, because we did it: We played those characters 20 years later and where they were. Even though I had a lot more gray hair 20 years later than I do now. [Laughs] That character would. No, I’m just grateful that it’s finally come out on DVD. That was huge. That was such a big thing with the musical rights… I would like to see Desperate Housewives as a musical. I think that would be great. 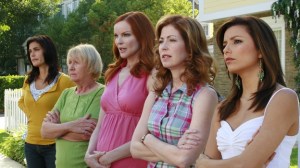 TVLINE | Would you do it?
I’d love it. Totally! Yeah. Don’t you think? I asked [DH creator] Marc Cherry about it, but he was like this [hides face] at that point. Did you ever see that French movie 8 Women?

TVLINE | No.
It’s really good. It’s Catherine Deneuve and Isabelle Huppert. You should see it. It’s very much in the vein of Desperate Housewives, and it’s eight women. And they sing! They break out into song in it. It’s worth seeing.

TVLINE | Desperate Housewives was so over the top.
Yes! It would not be weird for somebody to start singing. I could totally see that.