Kat Sandoval, welcome to the Department of State doghouse.

Sunday’s Madam Secretary ended on an upnote of sorts: A group of lesbian, gay, bisexual, transgender and queer people was able to slip away from the government persecuting it and take refuge in another nation. But the underground, foreign-policy maneuvering Kat and Jay had to pull to make the rescue happen could have negative ramifications in the long-term.

Long story short: The State Department, working via a non-governmental organization, engaged Kurdish smugglers to get the LGBTQ victims from their home territory of Abkhazia to Bulgaria, which promised refuge. But the Kurds and the Turks are archenemies… which is why Elizabeth was wildly unhappy with both her policy advisor and her chief of staff by the end of the hour.

“The diplomatic relationships with Turkey are at a very tenuous place at the beginning of the episode,” executive producer Lori McCreary tells TVLine. “Free speech was on the table, how they were treating their LGBTQI community was on the table, and this broke that. So Elizabeth, at the end of the episode, is going to go back and have to figure out how to repair that.”

She adds that the resultant problems will simmer until Episode 21, “where we’re going to see the ramifications of that. These are big, global issues.”

Also covered in the episode: Kat’s bisexuality, which was depicted in a different fashion than Blake’s coming out as bi last season. We spoke with McCreary and actress Sara Ramirez about how the CBS drama handled the conversation. 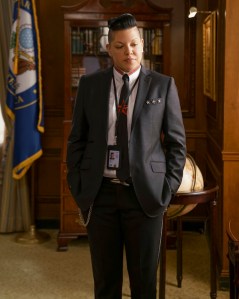 TVLINE | Can you both speak to the scene between Jay and Kat where he fumbles his way through the conversation about how she used to look more feminine before she left D.C.? Sara, how much of your personal experiences figured into the language and tone in that scene?
MCCREARY | We definitely wanted to have a very personal connection for these characters. Jay’s backstory was that he had been involved in the Iran Treaty, when there was a homosexual man who was executed — stoned to death, quite frankly — and it was because of Jay’s inaction that that happened. So he’s coming from a particular point of view of, “Oh my God, I cannot be ignorant anymore. Kat, please help me understand it.” I got a call from one of writers saying, “We’ll definitely need Sara’s input on this. Can she help us navigate these waters?” And Jay’s almost like our audience, wanting to know more.
RAMIREZ | I gave notes on [the first draft] after the table read, and the writers were really responsive. They took all of my notes, basically, and the scene — in terms of language, certainly in how Kat discloses her various identities — shifted greatly. I was really appreciative, because this is personal for me, you know? This secret that who I am, and all my various identities. It was important for me to tell stories that are reflective of the lived experience and the communities that I’m a part of. And Kat’s experience as a bisexual plus Latinx woman and parent is a story that typically isn’t told. Also, when Jay Whitman assumes Kat’s sexuality, based on her gender expression, and again on the gender of her partner, Kat did what many bisexual plus people have to do, and that is to come out and correct those assumptions.

TVLINE | Which she does rather gently, whereas she would have been well within her rights not to take on the work of teaching him.
RAMIREZ | Absolutely. You know, Kat and Jay had already developed somewhat of a working relationship, so there’s a mutual respect there already. It made sense to me that Kat would close the door for privacy when things started to really get into the [details], which I kind of liked. Yeah, Kat turned it into a teachable moment, and teaching is nothing if patience and compassion isn’t involved. You’ve got to meet people where they are, and that’s what Kate does: She meets Jay where he’s at with this, and he meets her where she’s at with this. It’s really kind of beautiful.

…It was really important in this scene, too, for me, that we see that Kat is in a non-traditional family with her partner… She talks a little bit in previous episodes around not having to give into the pressure of living some traditional life, and that gave me the thought that we could push that even further with her and her life, to learn that that’s maybe where that stance comes from… It was important for me that she didn’t gender her child with a pronoun in that scene. We just hear the name Desi. These are stories that aren’t really being told in this way, and complex narratives make for better, more authentic storytelling.