This Sunday’s Madam Secretary (CBS, 10/9c) focuses on the plight of a group of foreign lesbian, gay, bisexual, transgender and queer refugees seeking asylum — a storyline dear to both the political drama’s hotshot strategist Kat Sandoval and the actress who plays her.

“Originally, some of the producers shared with me that an international LGBTQI storyline was coming down the pipeline, and they expressed interest in my being a part of that conversation,” says Sara Ramirez, who identifies as queer and bisexual and who has been a vocal advocate for LGBTQ issues, as well as for marginalized communities. Series star Téa Leoni “was really supportive around me participating, as well, which I really appreciate,” she adds.

Ramirez tells TVLine that she met with Jessica Stern, executive director at OutRight Action International, a LGBTQ human-rights watchdog group. “I was given the show’s blessing to come in and go over some of the plot points,” she says, calling the conversation “really productive.” “We wanted to make sure we’re responsible and accurate, and we don’t want to put anyone in danger more so than they already are.”

For example: The script originally had the human-rights abuses happening in one country, but based on OutRight’s input, the Madam Secretary writers swapped in another nation. 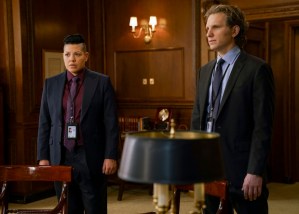 “Having someone like Sara… being so connected to these issues was one of the reasons that we were able to pivot our storyline,” says executive producer Lori McCreary, explaining that the organization said, “‘Look, normally it’s really great to shine a spotlight on these issues. In this particular case at this particular time, the end will probably be much worse for us, and you’ll be doing the opposite of what your intention is on this episode.'”

After sharing OutRight’s feedback with the writers’ room (“We had a table read, and then we were giving notes after on the episode, and I was invited to stick around, which I’ve never been invited to before,” Ramirez says gleefully. “It’s fun!”), Ramirez also weighed in on some of Kat’s scenes “and her personal disclosures,” the actress adds. (For more on that, make sure to read TVLine’s post mortem interview about the episode, posting Sunday at 11 pm ET.)

During the episode, titled “Refuge,” Kat and Jay work together to assist persecuted LGBTQ citizens escape their country while their American Homeland Security applications are processed. When a giant, literal roadblock arises — the country closes its borders — they’re forced to improvise.

“In this episode, we are learning about some of the things that happen behind closed doors that not everybody talks about, [such as] governmental work in conjunction with NGOs that are doing similar work,” Ramirez previews.

Press PLAY on the video below to watch Kat lay out this week’s issue for Elizabeth & Co., then hit the comments with your thoughts.