To be clear, no one has said that Grey’s Anatomy is sending April from the ER to the morgue when Season 14 wraps up Sarah Drew’s run on the ABC drama. To also be clear, the series that’s done in everyone from Derek to Lexie most definitely should not add Kepner to its list of casualties, and the reason can be summed up in four little words: It’s just too cruel. 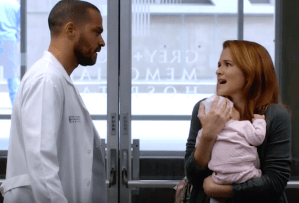 April has her detractors, sure. I haven’t even always been a fan. And she’s human — she’s made mistakes. Occasionally biggies. (Springing right to mind is her having left behind Jackson for the better part of a year after the heartbreaking birth and death of their son Samuel.) But this season in particular, it’s been almost non-stop misery for Kepner. Not only has she watched her ex-husband move on from their marriage with enviable ease, she’s suffered the triple whammy of “Personal Jesus,” slumped into a meaningless fling with Vik and hit the bottle with such abandon that the interns have rechristened her Dr. Party.

And it can’t end this way. April’s downward spiral can’t be allowed to lay her so low that she winds up six feet under. We’ve seen her bounce back too impressively too often for this to be the one time that she’s more than down, she’s down for the count. I say that not merely because a lot of us love April, either. (Although that, too, is true.) I say it because, as much as she needs a win, so do viewers. The evening news is dispiriting enough. Somebody has to get, rather than broken, a break. It ought to be April — for all of us.

What do you think? Doesn’t Kepner deserve a happy ending instead of a burial plot?