Although “Personal Jesus” was the title of Thursday’s Grey’s Anatomy, April was probably likelier to get stuck in her head a different Depeche Mode song — you know, the one that goes, “I don’t want to start any blasphemous rumors, but I think that God’s got a sick sense of humor.” She wasn’t the only one, either. 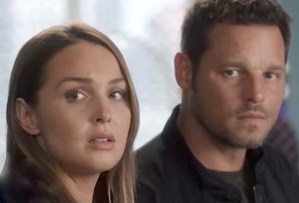 Early on in the hour, while Jo and Jenny were insisting to each other that neither of them had run down Paul, we learned that his hit-and-run had left him not a whole lot worse for wear: He mainly just had a concussion. After Jenny admitted to Jo that her fiancé had repeated with her an all-too-familiar pattern of abuse, the women stormed his hospital room to announce that Jenny was pressing charges and Jo, testifying on her behalf. Enraged, Paul leapt from his bed to lunge at them, hit his head and wound up in such bad shape that a decision had to be made about whether or not to pull the plug. And it wasn’t Jenny who had to make the decision, it was Paul’s wife — Jo, who, upon realizing that, broke down in hysterical laughter. In the end, she donated Paul’s organs so that the bad guy could finally do some good. And, since it turned out he’d been hit by a drunk driver, “nobody has to go to Canada,” as Meredith put it.

Meanwhile, Ben, having gone on his first firefighter ride-along, brought into Grey Sloan Eric, a 12-year-old African-American boy who’d been shot by the police while trying to get into his own house. (He’d forgotten his keys, you see.) Jackson did his best to act as a buffer between the cops, who were eager to get a statement, and Eric’s family. But the doctor was understandably outraged. “That is our tax dollars hard at work,” he said as the police “protected” them from the “suspect.” After Eric died, Jackson lit into the cops for being not racist so much as biased, and, duly shaken, Bailey and Ben had with Tuck “the talk” that no parent should have to have with their child. 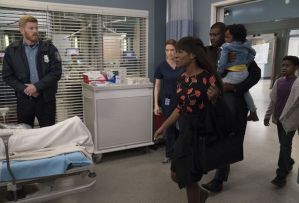 And as for April, poor April, not only was she affected by Paul and Eric’s unexpected demises, but she also treated a pregnant woman named Karen whose husband turned out to be, because this was Kepner’s day from hell, Matthew, the fiancé she’d left at the altar to elope with Jackson. The former couple’s reunion was as awkward as you’d expect, and maybe even more painful than you’d expect. (Props to the writers for getting in a super subtle reference to Samuel’s tragically short life.) Just when you thought April’s day couldn’t get any more harrowing, following the birth of Karen and Matthew’s daughter Ruby, the new mom’s liver started failing, other organs following suit. By the end of “Personal Jesus,” “the best thing that ever happened to” Matthew had passed away, and April was left drowning her sorrows, wondering where the hell God was when fate was raining down so much cruelty and unfairness. In the wrong (right?) bar at the right (wrong?) time, intern Vik wound up spending the night with April, even joining her in the shower in the episode’s final moments. Can she bounce back from this lowest of low points? TVLine asked Sarah Drew, who plays Kepner, exactly that and then some.

TVLINE | Is this a case where God has actually given April more than she can handle?
Yeah, she is kinda coming face to face with the bigger question about, if God is out there and He is good, how could He let all of this stuff happen? Why isn’t He intervening? Does He give a crap about anything? And if He does, why won’t He show up? This leads April into a multi-episode spiral of really questioning everything she grew up believing. It’s a pretty heartbreaking storyline. But I think it echoes a lot of questions people have now, people of faith, people who are not people of faith, just because of how much suffering we are witnessing in the world and in our country. It brings up a lot of big, deep questions, which I think is a good thing. I’m interested in telling a story about a faith that deals with doubt, and struggles with doubt and anger, and doesn’t just accept whatever is said at face value but really kind of fights to come to a kind of truth that makes sense. 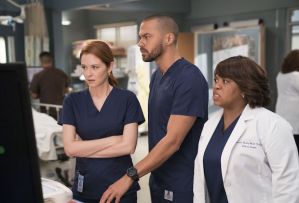 TVLINE | And, of course, there’s no pressure on you, knowing that the audience is watching April go through this trial by fire and thinking, “Oh, please, help her out of this, so I know I don’t have to live in constant despair!”
[Laughs] No pressure at all! But I think the story’s honest, which is what I love about this show. It has always told hard stories because they echo what people are struggling with, and hopefully gives them a space to feel things and think about things and work through things. So there’s some pressure there, for sure, but there’s also a great privilege in getting to tell a story like this.

TVLINE | What was April’s reaction when she realized, “Oh, Karen’s husband is… Matthew”?
It’s a tender and complex situation. Back in Season 10 when she ran away with Jackson, there was an episode where she mentioned to him that she’d tried to reach out to Matthew, but he had basically moved shifts so that he never had to deal with the hospital again and wouldn’t return her calls. As far as the audience knows, there’s been absolutely no closure. So she had no idea how he was doing. I think, especially in the scene where they talk about how their lives went, and Matthew brings up, “Oh, you must have a 3-year-old, right? You found your soulmate with Jackson… Isn’t it great how it all worked out for both of us?”… In that moment, we played around a lot with whether that was a moment of despair for her, a moment of “Oh, maybe I made the wrong choice?” or whether it was a moment of, “I can let go of the guilt for running away with Jackson, because the suffering brought Matthew to a joyful place. I can cling to that!” By that point in the episode, she was really trying to cling to moments of joy and also really [remember] that if she hadn’t run away, she wouldn’t have Harriet. And Harriet is her great joy. So she wouldn’t want to change anything, but her life has turned out very differently than she thought it would in the moment in the barn when she ran off with Jackson. It’s bittersweet. 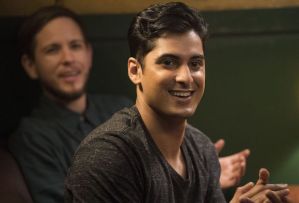 TVLINE | How does Vik fit into this? After this soul-crushing day, is he just like a pain reliever for April?
I think so. When April’s eyes go to camera right in that last moment in the shower, I kind of saw her joy fly out of her being. The moment with Vik is basically a “Screw it all” moment. “I’ve been following rules my whole life — for what? What was the point of doing all of this when people get screwed? Good people get screwed, left and right, and I got screwed, left and right. I’m tired of trying to do quote-unquote the right thing. It’s so hard. And I’m done with it.” And [the pain-relief aspect] isn’t specific to Vik, it could have been anyone. He just happened to be there, and she just wanted to do the quote-unquote wrong thing.

TVLINE | Do you think she can bounce back from this?
Absolutely. This is an exploration of a maturing woman engaging in a new way of looking at things that I don’t think diminishes her belief. She has the strength to find her way back, but it’ll take a little while.

So, what did you think of “Personal Jesus”? April’s “Screw it all” moment? Paul’s demise? Eric’s senseless death? Hit the comments.