As the shock of Sarah Drew‘s dismissal from Grey’s Anatomy slowly (so slowly) has begun to slightly (so slightly) wear off, we’ve begun wondering how the ABC drama can possibly do justice to April Kepner on her way out. Can it even be done? A few potential exit scenarios:

APRIL LEAVES SEATTLE | Given that Kepner still has feelings for ex-husband Jackson that don’t seem likely to go away, she might make the difficult but perhaps healthy decision to start over someplace where she won’t have to be privy to every twist in his love life. Her family’s farm, perhaps? Harriet would love it. 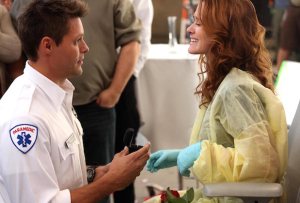 APRIL REUNITES WITH MATTHEW | The estranged nearlyweds’ reunion in “Personal Jesus” was understandably awkward. But perhaps she could help him heal after losing baby Ruby’s mom at the same time as he helps her recover from her divorce from Harriet’s dad.

APRIL ENLISTS | After son Samuel’s passing, April made tracks for a Middle East war zone with Owen — and thrived. Perhaps, as the trauma surgeon again tries to get a handle on her life, she’ll return to the battlefield that gave her such an adrenaline rush.

APRIL GETS PROMOTED | Not at Grey Sloan, obviously, because then she’d still be on the show. But Catherine has noticed both her former daughter-in-law’s talent and ambition. So she could easily put in a good word for April at another hospital — and then loan her the jet to make visiting Harriet easy.

APRIL DIES | To be clear, we do not like the idea of killing off Kepner. She’s had more than enough tragedy in her life, thank you very much. However, she might see some good in her own passing if it saves another party animal from the same self-destructive, dead-end road down which her crisis of faith has pointed her.

So, what do you think of these ideas? Got a better one? Hit the comments. (And yes, we’d have considered reuniting Japril except that Jackson will still be making the rounds at Grey Sloan in Season 15.)