Need to catch up? Check out the previous X-Files recap.

This week’s X-Files feels like a classic episode wrapped in a fresh exploration of the Mulder-Scully dynamic, and it’s one of the season’s best.

At the very least, “Familiar” is a hell of a creepy X-File in which very bad things start to happen in a town with a history of witchcraft. But the subtle character work David Duchovny and Gillian Anderson do during the hour elevates it to something great. Like last season’s “Home Again,” this week’s hour puts our favorite FBI agents in a familiar situation — in this case, investigating mysterious deaths in a sleepy hamlet — and allows us to see how the intervening years have tempered Fox and Dana’s thoughts, feelings and reactions.

For this longtime X-Phile, the result was something of a revelation. Read on for the highlights of “Familiar.”

CAN’T SEE THE FOREST FOR THE CREEPS | On an afternoon in Eastwood, Conn., a boy rides a playground’s merry-go-round, clinging to a marionette-ish doll that looks like some kid of deranged Pinocchio without the long nose. His mother pauses pushing the merry-go-round to take a call; it’s not a happy one, and while she’s distracted, the boy sees what looks like a man-sized, alive version of his doll peeking out from a tree in the woods near the playground. When the boy, whose name is Andrew, can’t get his mother’s attention, he slips away into the forest to follow the figure. 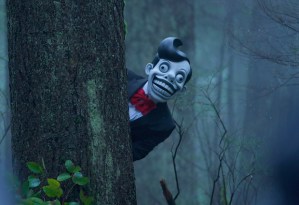 Andrew is singing about Mr. Chuckle Teeth (at least, that’s what it sounds like) and wondering where he went. The figure appears again, luring the boy deeper into the trees. And then something that we can’t see attacks Andrew. By the time police find him later that night, the boy is dead from what seems like an animal attack.

MOOSE AND SQUIRREL IN THE WOODS | As it turns out, Andrew’s father is a local cop, which gives the FBI jurisdiction to investigate. But when Scully and Mulder arrive on the scene the next day, the police chief doesn’t like what they — especially Scully — has to say: Because Andrew’s neck was broken, she’s pretty sure that he was murdered by a person. And when the chief scoffs, Mulder speaks up quickly. ” These aren’t just assumptions,” he says. “Agent Scully is also a medical doctor, and damn good at her job.” Is it weird that I feel oddly warm and proud of him at this moment?

Apparently, Scully is wearing the profiling pants in the family today, because she goes on to say that the killer is likely a male who lives nearby, who gets off on this type of violence and who will murder again. Mulder, meanwhile, thinks a hellhound — as in, the dog that guards the gates to Hades — is to blame. He points out that a lot of weird ish has gone down in the town, all the way back to when a woman accused of witchcraft allegedly burst into flame. “As we’ve discussed before, people don’t just spontaneously combust,” Scully says, and Gillian Anderson’s line reading is so perfect and infused with so much of the characters’ shared history, I want to buy it an Apollo 11 key ring to show it my undying admiration. But Mulder’s undeterred: He’s sure that there still are people in town who practice the dark arts. Scully, who’s been give-no-effs sassy in these past couple of episodes, shoots back that the only devil they need to worry about probably parks near the playground, “stirring something other than his cauldron.” Eew.

ANOTHER TRAGEDY | As she performs the autopsy on Andrew’s little body, Scully tells Mulder she thinks the kid’s father might have killed him, and she worries that his fellow officers are covering it up. Mulder, who is visibly sobered by the sight of the boy’s corpse lying on the table, says he wants to interview the chief’s 5-year-old daughter, who also was at the playground with her mother when Andrew went missing. Scully thinks that’s a waste of effort, but Mulder ignores her. Just like old times!

The chief’s daughter, Emma, is so absorbed in her Teletubbies­-like TV show, she barely gives Mulder a second glance. Mulder is far more polite than I would be in that situation — seriously, Emma’s mom, turn off the boob tube! — and instead engages the woman (whose name is Anna) in conversation while her child stares, glass-eyed, at the set. Anna asks if he has any kids. My heart breaks a little when Mulder simply replies, “I have a son. He’s grown, though.” Mulder pokes around a little and notices The Grimoire of the Eastwood Witch; Anna says that she and the chief are both lifelong residents of the town, and he’s super into its history. And just then, Mr. Chuckle Teeth appears on Emma’s TV show. “Mommy, he was in the forest!” the little girl cries.

Meanwhile, off a tip from one of his co-workers, Andrew’s dad Rick uses police computers to find any registered sex offenders who live in town. He finds one whose house is very close to the playground, then jumps in his car and peels out of the parking lot, set on vengeance. Scully, who is at the precinct to tell the chief her suspicions about Rick’s involvement in his son’s death, winds up on a ridealong when the chief speeds after Rick, trying to stop him.

When they all wind up at the pedophile’s house, he’s not home. Which is good, because Rick probably would’ve shot him on sight. In the woods nearby, Mulder is checking out the crime scene when he sees what looks like… a hellhound sniffing around. He calls Scully, who tells him to come to the offender’s place, and the demon dog slips away while Mulder watches. (Side note: I love how, after all the stuff he’s seen, Mulder’s just kinda like, “Well, huh” about SEEING A HELLHOUND.) 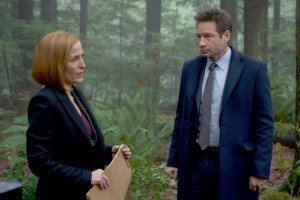 PRESUMED GUILTY | A crowd gathers outside while Mulder, Scully and the cops search the home of Melvin Peter, who never registered with the local police when he arrived in Eastwood years before. He works as a children’s party clown, and when the search yields a Mr. Chuckle Teeth costume, it looks like Melvin is pretty guilty. But Mulder’s not convinced, and he’s unnerved by how ready Scully and everyone else is to pin the murder on the creepy kids’ clown. “What happened to the precious presumption of innocence?” he wonders.

Back at the chief’s house, Emma is watching her show when the purple character suddenly appears outside her window. So she follows it outside… and before you know it, Emma is dead in the woods, too, seemingly mauled like Andrew was. At the scene, a slightly shaken Mulder (“she was alive just this morning”) realizes that there’s a salt circle hiding just under the leaves, and uncovers that they’re standing on an old Puritan burial ground. He posits that there’s a spellcaster in town who might’ve opened the gates of Hell — hence the evil pup — and a demon is luring kids by taking the form of something they love. Then heconfronts the chief. “I have let the devil into my soul and I have sinned against God,” the lawman says, copping to an affair with Rick’s wife, Diane. “I have broken a sacred commandment, but I have not killed anyone.” After he leaves, Scully compliments her partner’s insight. “I… did not see that coming,” he admits. (Ha!)

WHICH WITCH IS WHICH? | Back at the house, Melvin comes home and soon finds himself under physical attack from Rick and the crowd. Mulder has to shoot his gun into the air to get everyone under control, and then Rick pulls his weapon and kills Melvin by putting a bullet in his skull. Even worse: The cops later learn that Melvin was working a party far away when Andrew was killed — there’s no way he could’ve done it.

Elsewhere, Rick is arraigned on $5000 bail and goes home to yell at Diana about the affair, but she says she’s leaving. He takes his gun and follows, but doesn’t realize that when she’s driving and sees what looks like Andrew standing in the road, she flips her car and dies. Rick goes to the chief’s place, where he suspects his wife is, and walks around ready to shoot someone. But then Mr. Chuckle Teeth appears to him, and it’s confusing and scary, and then the chief shows up and Rick gets shot.

That’s how Mulder and Scully find him, but the chief is off in the woods, chasing a figure he thinks is Diane. But instead he finds his wife, Anna, chanting from the grimoire in the middle of a circle made of candles. “I have to end what I started,” she says, explaining that she only wanted to curse Diane for sleeping with him. But then the hellhound shows up and makes a midnight snack of the chief. Mulder and Scully show arrive right around then and beg Anna to stop what she’s doing, but she won’t. And then she bursts into flames. Spontaneously. The book, however, remains unscathed.

“That woman went up in flames,” Scully notes later. “Maybe it was the candles,” Mulder says. Oh, I get it — you guys have been together so long, you’re switching roles for this episode! Cool. But just as I’m ready to watch Mulder eat yogurt with bee pollen for lunch while Scully tosses sharpened pencils at the ceiling,” she says, “Maybe it was the gates of hell. Let’s get out of this town, Mulder.”

And they do. But after they leave, the playground merry-go-round turns, seemingly of its own accord.

A seriously disturbing Monster of the Week. Scully more in charge of the profiling/driving the investigation. A kinder, gentler, wearier Mulder who connects with the little victims in an achingly new way. Do you see what I mean about growing and changing and this hour being worth your while?