Need to catch up? Check out the previous X-Files post mortem here.

If you watched this week’s X-Files and you’re reading this on a smart phone or tablet, I applaud your bravery.

Because the overarching theme of the episode is that artificial intelligence — via smartphones/smartcars/smarthouses and the like — will probably kill us all in our sleep the moment it is able.

Vampire Slayer‘s “Hush” in its ability to convey both creepiness and humor without relying on speech. Also, any ep that uses the concept of Scully’s self-pleasuring as a recurring motif? Aces in my book.

Read on for the highlights of “Rm9sbG9eZX.Jz.” 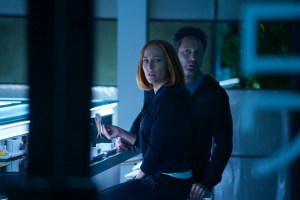 SOMETHING’S FISHY | After a cold open that informs us about some artificial intelligence that started out as a sweet, naïve being but turned into a racist garbage pile thanks to Twitter, we encounter Mulder and Scully waiting for some food in Forowa, a sushi restaurant that’s entirely devoid of other people. Like, no waiters, no other customers, nothing. They order via digital menu, then tool around on their phones while waiting for the food to arrive. They don’t say much of anything to each other, which seems odd… until I realize how often my husband and I sit on the couch next to each other, silent, each engrossed in the iPhone in our paws. Touché, X-Files. Did I mention Scully has bobbed her hair? She has. I like it.

After Scully gets a push notification asking her to “friend” the restaurant on social media (she declines), her meal arrives and looks normal. Mulder’s, however, is a slimy, whole blobfish on a plate. Scully giggles as she snaps a pic, but when Mulder goes into the kitchen to talk to someone about the mixup, all he finds are robots at work prepping the food. They seem to pause when he walks in, then resume their tasks as he uneasily backs out.

Since Scully’s just about done and Mulder’s apparently not getting anything other than the blobfish, he sticks his credit card into an automated system to pay. But when he chooses not to tip, the system won’t let his card go. He bangs on the counter, but that only seems to anger the restaurant, which extinguishes its lights and announces that all of the doors are locked. They’re trapped until Scully jiggles the lock with a well-placed chopstick, and they escape. But Mulder’s credit card, he realizes, is still inside. 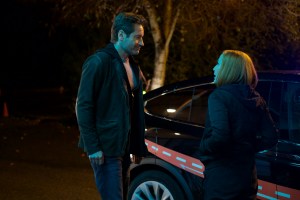 NOTICING A TREND? | The pair are outside when the car Scully ordered arrives; it’s a self-driving vehicle from a company called Whipz, and she barely gets out a “Mulder” before the door automatically closes and her ride home begins. The car’s voice-activated system keeps asking Scully what she needs, and when she replies that she wants it to shut up, it responds by speeding up abruptly. She (rightly) starts to freak. By the time it finally acquiesces to her orders and pulls over, she’s shaken.

Meanwhile, Mulder’s got similar problems: His car won’t play the Prince song he requests via voice recognition software, and his navigation system just directs him back to Forowa’s parking lot… where he suddenly gets a push notification reminder that he can still tip on his bill. He does not want to. His car blares Crosby, Stills, Nash & Young’s “Teach Your Children.”

QUEEQUEG! | Scully finally gets home and… well, well, well Dr. Scully, what a beautiful new abode you’ve got! Her house is rigged with smart panels and all that jazz, though she can’t get her alarm system to turn off after she walks through the door. The code is 0223 — Scully’s birthdate — in case you’re planning on robbing the good doctor in the near future. And the password she uses while on the phone with the alarm company is “Queequeg,” which makes this old X-Phile’s heart so happy. After everything quiets down, Scully’s phone bings: She’s been charged $250 for a false alarm.

Over at Mulder’s, he’s on hold with his credit-card company — Bigly Credit (heh) — when his phone hangs up without anyone touching it. So he settles in to watch The Six Million Dollar Man, but it doesn’t last long: Someone or something breaks into the broadcast to show him footage of himself sitting in the room right then. Not gonna lie, that kind of thing always, ALWAYS freaks me out when I see it in a horror movie. Same effect here. He eventually comes face-to-drone with the gadget that’s been dogging him, and he grabs his baseball bat for a little hips-before-hands action that sends the thing crashing to the ground. Not long after, a much more menacing drone shows up to collect its fallen brother. Mulder watches, stupefied.

When the robovac gets a little aggressive with Scully, she turns it off and puts it back in its box. She then calls the retailer and, while on hold, pairs the hold music to her home entertainment system. The song she wants to listen to in stereo? “Teach Your Children,” of course. It’s the same tune Mulder’s hearing as he eats frosted toaster pastries and (unsuccessfully) tries to get into his bank account But then he gets a message right on his computer screen: “Alert: What do you want to believe, Fox? Do you believe what you want? Or do you believe what is true?” CREEPY. Oh, and the drones are back, except now they’re tiny little baby drones and there are so many of them and THEY’RE INSIDE THE HOUSE! Mulder stealthily grabs his keys and tries to slip out, unnoticed, but the swarm of drones follows him to his car and then hovers over his home while he warily pulls out of the driveway.

SYSTEM MALFUNCTION | Back at Scully’s, the robovac busts out of its box while she’s preoccupied with trying to turn down the stereo’s suddenly too-high volume. So she shoves the thing in its box and puts it out with the garbage… where the Whipz car is lying in wait. She once again declines to engage with the rideshare company’s social media, so the vacuum shares the map of the house with the car.

And when she returns inside, the computer running her house goes insane. Lucky for us, it also offers up some choice peeks into Scully’s life. Among my favorite notes that pop up on various screens: “You drink more flavored water than regular water,” and “Why celebrate birthdays? Is life so important?” (that was in relation to a reminder about Skinner’s upcoming birthday). At one point, Scully’s smartfridge asks, “Scott’s coming for dinner. Defrost chicken?” And then I ask, “WHO IS SCOTT, SCULLY?” But then the appliance starts shooting ice cubes at her from the dispenser, and we’ve got more immediate problems on our hands. Because Scully’s condo is done playing coy and is now legit trying to kill her.

The system locks her inside and creates a gas leak as the robovac roams the floor menacingly. She makes her way to a sliding glass door just in time for Mulder to show up on the other side. “I smell gas!” she yells. “Why is your house so much nicer than mine?” he responds. (Ha!) But then the vacuum somehow creates a flame that ignites the gas, and Scully breaks the glass with a fireplace poker just in time to jump to safety. 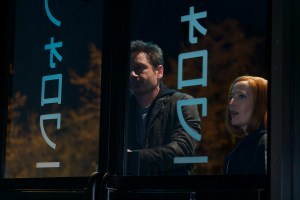 LESSON LEARNED? | When neither of their phones will let them call 911, and they’re locked out of Mulder’s car, they make a run for it on foot. They soon realize that the ‘bots are tracking them via their devices, so they dump everything: phones, fitness trackers, smart car keys and the little silicone-wrapped friend Scully slipped into her pocket earlier. Mulder’s face at seeing that, by the way, is amazing.

They wind up in a warehouse of some sort where robo dogs track them and they nearly get shot and there are so many very scary bleeps and bloops. Eventually, a robot brings Mulder his phone, just in time for a push notification that says he has mere seconds left to tip on his Forowa bill. So he agrees to add 10 percent to his total, and all of the AI horror stops. The robot’s eyes even turn green as it informs Mulder, “We learn from you.” Fox studies it. “We have to be better teachers,” he replies.

Then Moose and Squirrel have breakfast at a decidedly analog diner. “Oh man, I lost so many steps when we were in that warehouse,” Scully laments. “It’s good to see you got all your personal devices back,” he says. “Not all of them,” she corrects him. And even though they’ve just been through their own personal 2001, the pull of technology is strong: They both pick up their phones and start noodling around. But then Scully thinks better of it, puts hers down and then lovingly places her hand on top of Mulder’s. So he puts down his phone, as well, and they sit together as the hour comes to a close.