Way back in a Season 2 episode of The X-Files, FBI assistant director Walter Skinner struggled to convince Fox Mulder, a headstrong agent grieving for his dying partner, not to resign from the Bureau. Aspart of a larger story about having the courage to investigate the inexplicable, Skinner offered this harrowing vignette:

When I was 18, I went to Vietnam. I wasn’t drafted, Mulder,  I enlisted in the Marine Corps the day of my 18th birthday. I did it on a blind faith. I did it because I believed it was the right thing to do. I don’t know, maybe I still do. Three weeks into my tour, a 10-year-old North Vietnamese boy walked into camp covered with grenades and I, uh… I blew his head off from a distance of 10 yards.

The memory was one of the first — and only — glimpses we’ve ever gotten into the inner life of Mulder and Scully’s taciturn, conflicted, gloriously bald longtime boss… That is, until this week’s installment of the sci-fi drama.

“He’s someone who, as Scully points out in the episode, we know precious little about, even after all these episodes,” says producer Gabe Rotter, who wrote the script. “So I just thought it would be cool to take a deep dive into who this guy is and what makes him tick.”

Mitch Pileggi, who plays Skinner, recalls giving series creator Chris Carter a ribbing about Season 10’s scant use of the A.D. “I was whining last season about not having enough screen time or not having enough to do on the show. And at one point when I was talking to Chris about it, I said, ‘Is Skinner really hard to write for?’ And he was like, ‘No.’ And I was like, ‘Well, how come we haven’t done it?’,” he says, laughing. “It’s funny, because Gabe Rotter was standing there, listening to this conversation, and he said that was when the light went off in his head.”

This week’s episode, titled “Kitten,” revisits the wartime incident mentioned above. Skinner goes MIA from the Bureau while looking into one of his Vietnam buddies named John (played by The Sixth Sense‘s Haley Joel Osment), who has recently been released from a psychiatric hospital after a long stay. As we learn during the hour, John accidentally inhaled some experimental gas while deployed, and the exposure turned him from a meek draftee into a callow killing machine. What’s more, Skinner’s testimony at his court-martial — where a young Walter was forbidden by his superiors to mention the gas — led to John’s forcible stay at the institution. 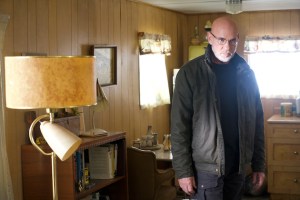 A cryptic note from John, accompanied by a desiccated ear, sends Skinner to John’s home state of Kentucky. That’s where Walter meets John’s son Davey (also played by Osment), who’s bent on getting revenge on Skinner as well as the men who apparently continued to experiment on his father in the government-run psych ward. Thankfully, Mulder and Scully ride to the rescue just as Davey is getting ready to kill Walter, and the A.D. vows to do right by his war buddy by finding the truth of what the government is up to, “no matter the cost.”

In separate interviews, TVLine talked with Pileggi and Rotter about the hour, which seems to herald a truce between Skinner and the agents who have inadvertently tanked his career in law enforcement. Read on for the highlights:

TVLINE | Just a few days ago, one of our readers tweeted me and asked, “Why hasn’t Skinner advanced after all of this time at the Bureau?” And now we have our answer!
PILEGGI | Now we know! [Laughs] People have been asking me that since last season and even before then. “What’s going on?” I’ve always said, “Well, it has to do with his association with Mulder and Scully.” 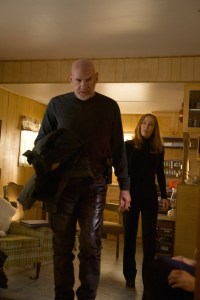 TVLINE | What struck me as so funny is that this episode seems to be the first time that Scully, if not Mulder, realizes that they may have been part of derailing his career.
PILEGGI | They’re so self-centered. They’re so inconsiderate of what’s going on with the Skinman. [Laughs] It’s an abomination.
ROTTER | We talked about that a lot in the writers’ room… They’ve got their eye on the prize. They’ve always had this guy’s support, and they’ve never fully weighed how much it affected him.

TVLINE | It’s so sad when they’re in his apartment and Scully notes that there’s nothing on the walls. There are no personal effects. It makes me wonder: What does Skinner do when he’s not at work? Have you ever thought about what his off-hours look like?
PILEGGI | It’s funny, because at one point years ago, when The Lone Gunmen got their spinoff, I said to Chris, “What about Skinner?” And he goes, “What would it be about?” [Laughs] I was like, “I… don’t know?” Because what does he do? It’s obvious that there’s nobody else in his life, which is kind of sad. He appears to be living such a Spartan existence — other than, did they show the Metamucil in the apartment?

TVLINE | Yeah.
PILEGGI | I haven’t seen the episode yet. But yeah, I thought that was hilarious when I read it. Skinner has been described as being perpetually constipated, so I thought that was funny. Gabe had fun with that.
ROTTER | The idea was that this is not a home. This is a utilitarian space, it’s functional. He is a guy who lives for his work and he comes here to eat and sleep.

TVLINE | Mitch, your nephew, Cory Rempel, played the younger version of Skinner. Did you talk a lot about the scenes, either before or after?
PILEGGI | He had watched a bunch of stuff to get a feel for Skinner. We talked a little bit, but I just wanted to give him — as a matter of fact, I asked him, “Do you want me to come to set the first day? Would it help if I were there?” Initially he said, “No, no. I’ll be OK.” And then I got a call from him the night before, and he goes, “Well you can come if you want to.” [Laughs] I said, “You know what? You’ve got a 4 o’clock call or something like that. You’re on your own, dude.” I knew that he was good in Carol Banker and Gabe’s hands. They know that character as well as I do. 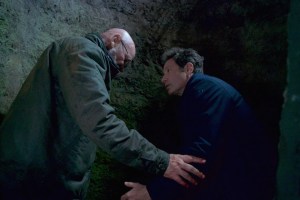 TVLINE | I watched a screener that was very dark, so you’ll have to help me here: It seems, when Skinner falls into the pit, that he’s impaled on a very sharp punji stick. And then he gets himself off of it… all by himself?!
PILEGGI | Yeah. I was like, “Is he pulling the punji stick through him? Or is he pulling himself off the stake?” You know, Skinner’s a badass. But I was going, “This wound, is this going to be, am I going to be crippled? How bad is this wound?” [Laughs] Like I said, I haven’t seen it yet. But it’s assumed that he gets himself off the stake, somehow or another, and when Mulder falls into the pit, he bulrushes him to pull him to the side of the pit to stop him from being impaled.

TVLINE | Not gonna lie: I was kind of hoping for the inverse of that scene from I Want To Believe, where Mulder comes to as Skinner is lovingly cradling him.
PILEGGI | [Laughs loudly] You liked that, huh?

TVLINE | At the end of the episode, in the trailer, Skinner gives a speech that seems to convince Mulder — who’d been skeptical of his boss’ motives and allegiance earlier in the season — at least for now. Does that truce last?
PILEGGI | I think it’s momentary. [Laughs] It’s temporary. Things go back and forth with them.

TVLINE | Skinner is still hiding a giant secret from Mulder and Scully. How torn is he about that?
PILEGGI | He’s trying to figure out the best plan of attack to accomplish what he wants to accomplish — as he has many times in the past when there’s some indication as to whether he’s under Smoking Man’s thumb or not. He’s manipulating certain things himself. He has his own methods of operation, unofficial channels, you know? It’s the way he’s always operated. Why he doesn’t bring them into the picture, I don’t know. But he doesn’t. 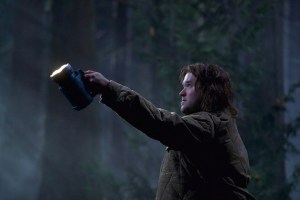 TVLINE | Gabe, was Haley Joel Osment in your mind when you were writing the episode?
ROTTER | He wasn’t in my mind when I was writing it. But Rick Millikan, our casting director, suggested him. I loved the idea. Chris and Carol Banker, our director, honestly didn’t love the idea when we first heard it. Very much to Haley’s credit, he did something that a lot of actors at his level just won’t do, which is he put himself on tape for us. It just speaks to the kind of guy he is.. And honestly, that won him the part. As soon as Chris and Carol saw him, they said, “You’re right. This guy’s amazing.” He did a great job. He’s a creep. A good creep.

TVLINE | We see Skinner pulling the bloody tooth out of his mouth at the end of the season. Do we get anything more on that this season? It’s troubling.
PILEGGI | I think they’re gonna leave that one there and let people draw their own conclusions. He’s not going to be toothless by the end of the run. [Laughs]