Whatever aches in Vegas, stays in Vegas.

This week’s This Is Us takes us to Sin City for Kate and Toby’s simultaneous yet separate bachelorette and bachelor parties. But what should be a rowdy trip turns into the saddest stag night ever, including a Randall-Beth blowout, some rather bad news for Kevin, and Madison from the overeating group at her Madison-iest. But because this is This Is Us, the weekend also contains a significant amount of tears.

Meanwhile, in the past, we see a selection of Jack and Rebecca’s anniversaries over the years. Read on for the highlights of “Vegas Baby Vegas.”

UNTIL THE RAINBOW BURNS THE STARS OUT IN THE SKY | In a flashback, Jack and Rebecca celebrate their first anniversary at a bowling alley. They’re super-committed to the whole thing — matching blue satin “Pearson” shirts and everything — and they dance in the lanes to Stevie Wonder’s “As.” 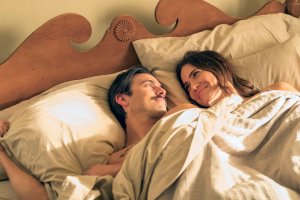 Jump to their fourth anniversary, and they’re still dancing, this time in their kitchen. She’s pregnant. It’s cute. She gives him a hammer with his hame on it, he gives her an upright piano.

Then, on another anniversary, Mr. and Mrs. Pearson wake up and she makes him promise that there aren’t any grand gestures planned for that morning — he says that the biggest thing they’ll do will be to get the kids to bed early that night and watch The Commish together to celebrate. (Ha!)

When the kids hear that Jack doesn’t have anything planned, they suggest that they pull together a “big anniversary party.” Then they orchestrate a romantic night that involves subterfuge and a meteor shower. 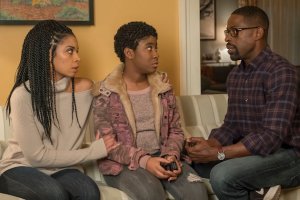 DEJA VU | Deja’s mom doesn’t know that she’s at Randall and Beth’s house, and that’s mainly because they’re past due on the gas bill and she needs about $90 so they can get the heat turned back on before Linda the social worker’s next visit. Randall offers to set up a recurring payment, but Deja says her mom won’t accept it. So he gives the teen cash and makes her promise that she’ll call if anything else goes wrong.

Weeks later, Deja hasn’t called — but Randall worries that she might need them while they’re in Las Vegas for the pre-wedding festivities. Beth is totally into the trip and reassures him that Deja will be fine, but Randall sulks and points out that they’re only being included as “pity invites.” Beth, who is in sore need of a vacation, doesn’t care.

Over at their apartment, Kate and Toby lament that they’re so co-dependent, they barely have enough friends to help them celebrate. “I had to scrape the bottom of a very nerdy friend barrel to even have a bachelor party,” Toby notes. “Madison is running point on yours. Madison.” Apparently Toby has a brother who’s not interested in joining them, but Toby acts like it doesn’t bother him as much as it probably does. 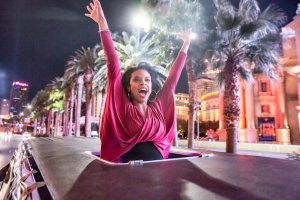 THE HEAD AND THE HEART | When they arrive in Vegas, Beth wants to do something crazy, but Randall wants to call their former foster kid to check in. Beth stops him, and he makes a (probably unintendedly) cutting remark about how she’s the “head” and he’s the “heart” of the family. She gives him a LOOK, then schools him hard: “Deja’s no longer a part of our home. It’s no fair to anyone involved to keep acting like she is. You know that.” Things get chilly in their limo after that, and it has nothing to do with the fact that Beth might’ve left the moonroof open after she stuck her torso through and rode The Strip it like a giddy co-ed.

Then everyone gets glammed up and goes for it. Madison is in her element, telling Beth “Your hair is always different, and I. Am. Obsessed” and handing out novelty tee-shirts that say “I Love Toby Dick.” Is it any wonder Beth is soon drinking straight from the vodka bottle? (Side note: In case you’re wondering, I am obsessed with that shiny beaded shawl thingy Beth has draped over one shoulder. Gorgeous.)

In Toby’s suite, Kevin and Randall meet Toblerone’s pals, then they head out to dinner. That’s where Kevin runs into one of his old co-stars from the movie. And when he mentions that he can’t wait for the movie to premiere, she informs him that she’s been cut out of the movie. “Half of my scenes were with you,” he says flatly, zeroing in on the cocktails being made at the bar right in front of him. And then he asks one of Toby’s friends that he’s not feeling well and to please excuse him from the rest of the night.

Meanwhile, Randall steps away after he realizes he missed a call from Deja. She doesn’t say much but tells him that she and her mom are “making it work.” However, when we see her hanging out in a shady-looking hallway, it doesn’t feel like that’s the case. And when Randall returns to the table, he begs out of the rest of the evening, too.

GIRLS JUST WANNA HAVE BUNS | Kate’s night is going considerably better, thanks to the gyrations of the dudes of Magic Mike Live. But when Randall makes his way to the show to see Beth, he finds her laid out on stage while some three-quarters naked guy swings around above her. When Beth finds out that Deja called but that nothing is immediately wrong, she goes off. “One night. You couldn’t give me one night? I put aside your anxiety every damn minute of every damn day,” she says, and IT IS ON! Randall and Beth start addressing each other as “husband” and “wife” and as the argument gets nastier, it is so refreshing to see them not be so damn perfect all the time. When Kate steps in on her brother’s behalf, Beth literally asks her to take a seat, pointing out that she’s his wife. “Randall has made it perfectly clear who’s more important to him,” Kate shouts back, and instantly regrets it.

Randall finds his sister sitting at the slots, drinking cosmos, and she laments that she “lost” him to Beth so much sooner than she thought she could have. And then Randall tells her that she could never lose him, and they reminisce about binge-watching Sex and the City after Jack died, and it’s very sweet. Then Kate tells Randall that Toby really only wanted to spend time with his future brothers-in-law that weekend. Oops.

So Kevin stops doing sit-ups like a man possessed, trying to stave off his desire to drink after hearing the potentially bad news about his part in the Ron Howard flick, and he and Randall grab Toby and try to resuscitate his stag party. But they wind up walking and talking about their various hurts. Woo-hoooo, guys! But then Toby gives them a little pep talk, and then they hit Freemont Street. (Oh, and by the way, Howard didn’t cut Kevin out of the movie — just his romantic subplot.)

And while that’s going on, Kate drops by Beth’s room to apologize. She admits that she was “intimidated” by Beth when she and Randall got together. Beth cries as she confesses that fostering is “the hardest thing I have ever done” and that she’s as attached to Deja as Randall is and she can’t stop worrying about her.

PARENTAL INSTINCT FTW | After Beth and Randall make up on the way home from Vegas, they decide to stop by Deja’s house just to check on her. And that’s when they find the girl and her mother, sleeping in their car.