“It’s not gonna kill you” is always high on the list of things one wants to hear in the hospital. But, in Thursday’s Grey’s Anatomy, April isn’t saying it to reassure a patient that they aren’t at death’s door, she’s saying it to chill out her fellow doctors, who are stunned to learn that, to compete in the Grey Sloan Surgical Innovation Contest that she wound up in charge of, they have to write a proposal in three days. Which of Kepner’s peers made it to Phase 2 of the contest? Read on… 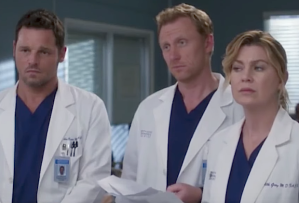 ‘MLA OR APA STYLE?’ | As “Harder, Better, Faster, Stronger” began, a hungover April kicked Vik out of her place but turned him down for a rematch that night (since it was her turn with Harriet). When she made it to Grey Sloan, she revealed to her colleagues the rules of the contest: Of the initial proposals received, 25 would be selected to receive $100,000 in seed money; after that, five would be awarded $1m grants, and the eventual winner would get $5m. Who’d be doing the judging? A panel of esteemed Seattle surgeons, April said before recommending that her pals get to work so as not to waste that panel’s time. “Good God,” marveled Richard, “I’ve created a monster.”

Meanwhile, a young patient named Kimmy was putting on a concert in her room, doing a fine rendition of “Maybe This Time” before meeting with Alex, Amelia and Sam. Meredith was giving bad news to a patient named Harry, an alcoholic old friend of Richard’s who wanted to die clean and sober. And Catherine introduced Jackson to Dr. Michelle Velez (Candis Cayne), a renowned plastic surgeon who hoped he’d want to win the surgical-innovation contest by harvesting tissue from the peritoneum for her gender affirmation surgery. Afterwards, Jackson reminded his mom that they’d agreed they would never work together on genitalia. “You can think of this vagina as your [birthday] gift to me,” she suggested, further traumatizing him. 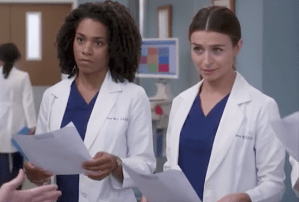 ‘STOP EATING CHIPS LIKE YOU’RE TRYING TO SEDUCE THEM’ | After Meredith’s recent patient Judy checked back in with the same symptoms as before her spleenectomy, Grey was surprised to discover that she was “infected with a bunch of tiny spleens.” (Hello, contest idea!) Meanwhile, Bailey enlisted Levi to bring her some things at home because she was on bed rest for reasons that they wouldn’t be discussing because they were above his pay grade. (Hilariously, she made it sound like they were going to be doing something naughty in her bedroom — as if.) Left by Amelia to work alone together, DeLuca and Sam — no shocker here — found it difficult to keep from having sex. (He even found her chip-eating arousing!) And, while accompanying her dad to a dance lesson — a surprise for his wife — Maggie made the mistake of disclosing that she was dating Clive and making her late mom proud. “I just wish,” she said, mortifying her dad, “I could call and tell her how slutty I’m being.”

Working with Jackson on developing spray-on skin, Dahlia blurted out that she found him attractive. Oops — what she meant was “talented.” She found him talented. (Yeah, right.) Luckily for the intern, the awkwardness of the moment was interrupted by Catherine, chasing down her son to campaign anew for him to tackle Michelle’s case. Finally, it appeared that she might have (almost) reached him by noting the suicide rate in people with gender dysphoria. In the OR, while treating Kimmy, Amelia and Alex discovered that they couldn’t remove the girl’s tumor without taking away her ability to speak. Which would be awful, obviously. But since different parts of the brain worked to sing and to talk, she might still be able to sing, as she so desperately wanted.

‘NO CHA-CHA’ | That night, Maggie was having a perfectly nice date with Clive when she was called away suddenly. But it wasn’t a medical crisis, it was Richard — he needed her in his salsa class. While dancing terribly, they bonded over difficult anniversaries (since it had been about a year since her mom passed). At the hospital, April told Arizona that she was finding it difficult to dodge “the intern I’m sleeping with.” “We have a no-daylight rule,” she explained, even though Robbins was preoccupied with the ache she was still feeling over having lost Karen. Then, April continued, she sought him out at night. “I’m like a sex vampire,” she said. Later, Amelia called DeLuca and Sam off their research for her/flirting for themselves and put her on Kimmy’s case — how could a tumor be removed without losing a single cell?

Operating on Judy with Jo, Meredith developed an idea to reproduce organs like, say, livers — yeah, her contest proposal was gonna be killer. The further along Bailey got with her prototype for her contest entry, the more convinced Levi became that she was seducing him. At last, after he announced, “I do not feel safe here,” she made it clear that she had no intention of getting frisky with him. Eventually, Amelia and Alex came up with a daring plan to help Kimmy. But they’d need to do testing through the contest to make it work. As Maggie noted that it was easier talking to Jackson about medical stuff than Clive, Dahlia’s crush only seemed to grow. (Also, Dahlia is funny.) Following Harry’s passing, Mer told Richard that he’d helped inspire her proposal. 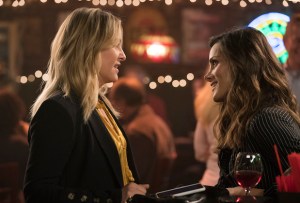 ‘IT WASN’T MY FAULT’ | Although Arizona missed the deadline to submit her proposal in writing, April allowed her to tell her about it. After hearing about Robbins’ idea to help save a lot of Karens, Kepner told her to write it down. (Maybe April’s about to get her groove back?) As the hour began winding down, Kepner and the panel started reviewing the proposals. Jo was thrilled to learn that Mer wanted her as her partner on her project — after all, she’d help come up with it. And Jo was ready to start using Brooke as her middle name. Jackson at last came around and decided to take on Michelle’s case. That night, Arizona thanked Carina for having been worried about her — and invited her to partner up on the project (and then some). Owen revealed to his colleagues that he wouldn’t be participating in the contest; research wasn’t really his thing.

When the results of the contest thus far were revealed, we learned that Meredith and Jo would be advancing (which might be problematic, as Grey hadn’t gotten an important polymer patent); so would Arizona and Carina, and Maggie and Richard. While Webber surprised Catherine with his newfound dancing ability, Amelia and Alex wondered WTH they were going to do, because their proposal — which they needed to be accepted if they were going to have any shot at saving Kimmy — had not made it to Phase 2 of the contest. So, what did you think of the episode? Glad Arizona and Carina reunited? Picking any favorites among the interns? Hit the comments.