Ladies and flukemen, The X-Files‘ Darin Morgan has done it again.

The sci-fi drama scribe/director/producer’s latest alien offering, Wednesday’s “The Lost Art of Forehead Sweat” episode, takes on the concept of manipulated memories — remember the whole Berenstein/Berenstain Bears parallel universe thing a few years back? — and skewers the existence of a post-truth society, all while managing to slot in some very funny (and wildly altered) clips from the series’ original run.

We couldn’t wait to break down the hour with the Guy man himself, but first, a brief recap: 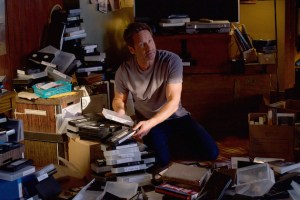 A mysterious man contacts Mulder and says he’s stumbled on the “conspiracy to end all conspiracies,” hinting that Mulder should look into the Twilight Zone episode “The Lost Martian.” Fox is well acquainted with the sci-fi classic… but when he goes hunting for it later, it’s as though it never existed, which confounds Mulder, because he has clear memories of watching it as a child. The man later appears to Scully and hands her a box of Goop-O A-B-C, a product similar to Jell-O 1-2-3, before running off and yelling “Just prove I’m real!”

Scully is intrigued, telling Mulder that though she has fond memories of making the dessert with her family as a child, she hasn’t been able to find it in decades —everyone she asks about it insists that she’s thinking of Jell-O 1-2-3 instead. That’s when Mulder brings up the Mandela Effect, a phenomenon “when someone has a memory that doesn’t coincide with everyone else’s or the facts.”

The mysterious man, who thinks his name is Reggie (but is really played by Veep‘s Brian Huskey), says he uncovered a similar phenomenon when looking for children’s books he remembered as being written by Dr. Wussle… only when he found them, the author’s name was spelled Dr. Wuzzle. An exasperated Scully says it’s merely a case of “people misremembering stuff!” Mulder thinks it’s evidence of parallel universes. And Reggie is convinced that now that he’s figure out what “they” are up to, he’s being expunged from everyone’s memory.

Oh, and he helped Mulder start the X-Files (or so he claims), an assertion that tees up a very funny remix of several clips featuring series icons Eugene Tooms, Clyde Bruckman and Mrs. Peacock, only with Reggie digitally inserted to look as though he’s investigating alongside the FBI’s Most Unwanted.

There are a lot more turns and twists — including Mulder’s face-to-face meeting with Dr. They, the man Reggie claims invented mass memory manipulation — before Scully figures out that Reggie is really just a mentally unstable government employee who knows so much about them because he’s been listening in via illegal wiretap for years. And just before he’s carted off in a straitjacket, Reggie tells Mulder and Scully that their last case together involved an alien descending to Earth, handing them a book called All the Answers, and then leaving for good: No one in the universe wants to hang out with humans, the creature says, because they lie.

Read on for Morgan’s take on the episode, which may be his final for the franchise. 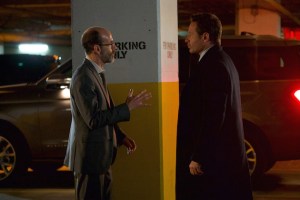 TVLINE | Tell me a bit about shooting Brian Huskey for the footage you inserted into the flashbacks.
Well, I had sent him all the clips we were using. I don’t know if he’d really seen the episodes. I don’t know how big of an X-Files fan he was, if at all. So he at least knew what the seed was, and I would try to explain it if I had to, what was going on. The the tricky part is really more for the camera guys to get the lighting, to match the lighting and the camera angles. That was a bit of a challenge.

TVLINE | How did you pick which moments to revisit? Were there any that you picked that didn’t make the final cut?
Initially but I thought I was going to be using different episodes or scenes, but then when I went back and looked at those things, there was no place to put Reggie. They were all tight close-ups, usually Mulder and Scully. That was all sort of last-minute, that was the last thing I wrote in the script. It was like 3 in the morning. I was watching like DVD episodes and sort of fast-forwarding through them. “No, he could fit in there.” I tried to pick episodes that at least bigger fans of the show would remember, and I think the ones that I picked most people know.

TVLINE | What came first: calling the character Reggie so that it would fit in the clip? Or just having him be Reggie and realizing that it would fit, thanks to the Reggie Purdue character?
I knew Mulder called him something. I remember that gag from, it was from a Vince Gilligan episode, and I remember the gag of the cell phone, the big cell phone. I knew he called the guy something but I couldn’t remember what so we had to look in that episode, and then he became Reggie. [Laughs] So whatever he called him, that’s what his name was going to be. And then Chris [Carter, series creator] pointed out there was actually a Reggie character that we saw in the first season. He was another FBI agent, but I just ignored that.

TVLINE | I saw an unfinished cut of the episode, so I have to ask you if this was on purpose or just a hiccup: When Reggie is going on about how memories can be redacted to get rid of corporate misdeeds, he mentions a company, but there’s a blip and you can’t hear the name. That’s on purpose, yes?
Yes.

TVLINE | Amazing.
In the original, in the script, the first draft of the script, I actually named the company, and I was asked to rewrite that.

TVLINE | I don’t suppose you’d tell me which company it was?
No. [Pause] I’ll tell you that they were sponsors of the show. [Laughs]

TVLINE | I know you’ve said you sometimes take heat from fans for presenting Mulder with all his foibles, for pointing out how absurd it would be for Scully to stick around for all this time.
I don’t know if I get it from fans. I think I might get it from [David] Duchovny. [Laughs] 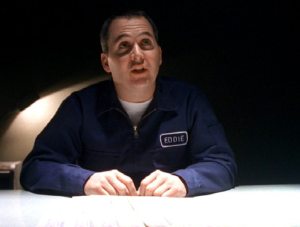 TVLINE | What has been his biggest pet peeve?
You know it’s a weird question. It’s a trick question, because although Duchovny complains about me making fun of Mulder, I actually think he likes it. He has never said, “Oh Mulder wouldn’t do that” or “Come on!” He’s always been a very good sport about it.

TVLINE | Going back for a second: I do love that one of the clips you chose was from “Small Potatoes,” an episode you guest-starred in. Was that a must-have? Did you always know that was going to be one of them?
Well it’s a must-have because I get paid. [Laughs]