If you’re an X-Files viewer who likes your Mulder a little goofy, your Scully a little put out and your callbacks to previous episodes plentiful, this week’s Darin Morgan-written and –directed hour is a bleepin’ dream.

“The Lost Art of Forehead Sweat” (Fox, Wednesday at 8/7c) takes the same irreverent tone as the producer’s previous X-Files eps, which include Season 3’s “Clyde Bruckman’s Final Repose” and “Jose Chung’s ‘From Outer Space’,” as well as last season’s “Mulder & Scully Meet the Were-Monster.” It examines the concept of The Mandela Effect — which happens when masses of people remember something differently from how it actually happened — and offers up a possible explanation for how the FBI’s current investigation of the unexplained came to be.

We got Morgan on the phone for a few minutes to talk about the episode, which prominently features comedic actor Brian Huskey (Veep, People of Earth) the same way that “Were-Monster” did Rhys Darby in Season 10. Read on for Morgan’s thoughts, then make sure to watch the exclusive sneak peek video at the top of the post.

CASTING WOES | “I’ve been a fan of Brian’s for a while. I just had to fight for him,” Morgan told TVLine. “It was Fox or something. I don’t know. I had the same problem with my last episode with Rhys Darby. For some reason, they won’t let you have the person you want… They’re both great performances. I’m sure if I do another episode, I’m going to have the same problem.”

BE KIND, REWIND | “Forehead Sweat” trades heavily in nostalgia in a way we don’t want to spoil before you see it. We will say that Huskey’s character’s name, if not a full-on Easter Egg,  is something of a sweet marshmallow Peep for fans. 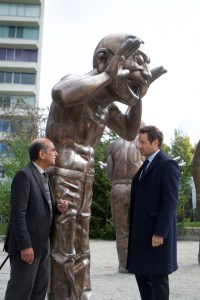 FUNNY BECAUSE IT’S TRUE | The hour includes a funny-though-biting examination of the fake news phenomenon, criticizing those who will believe something even in the absence of fact. Yet Morgan hesitated to draw too straight of a line between our current political climate and the sci-fi drama’s take on it. “I don’t know what to say. I have very strong views about it, and yet it’s difficult for me to do anything in a straight, serious vein,” he said, adding that humor often stops people who are opposed to an idea from rejecting it outright. “Whatever someone’s political stance is, what party they belong to, they will be able to watch the episode and appreciate what it’s actually trying to say [without] having too knee-jerk of a reaction.”

‘THE END’ FOR REAL? | Given that Gillian Anderson recently said she was done with the show after this season, and series creator Chris Carter said The X-Files wouldn’t continue without her, we wondered whether Morgan thought that Thursday’s episode was a fitting swan song for his time with Scully and Mulder. “Sure, oh yeah,” he said with little hesitation. “In a weird way, the last three episodes I’ve written, I’ve written under the assumption that they could be the last episode I ever do for the show, and so they’re sort of written as if they are. I think this one kind of works.”