At last, with the midseason premiere of Grey’s Anatomy, we could pick our jaws up off the floor after the winter-finale cliffhanger left Jo face to smug face with her abusive husband, Paul. In “1-800-799-2233,” she was horrified to learn that he had a new fiancée, Jenny, then even more horrified to learn that he’d volunteered to pitch in at Grey Sloan during the hacking crisis!

Though Alex and Meredith circled the wagons around Jo, Paul spent the day insisting that he’d been the victim of his “unstable” wife, that she’d run off with his money and, in the process, trashed his reputation. When at last the ink on the Stadlers’ divorce papers began to dry, Jo discreetly reached out to Jenny, offering to help if she was being abused. In response, Jenny told Paul, and the morning after his ensuing confrontation with “Brooke,” Meredith arrived at work to find Jo and Alex staring at Grey Sloan’s newest patient — Paul, who’d been the victim of a hit-and-run! “What did you do?!?” Mer asked. 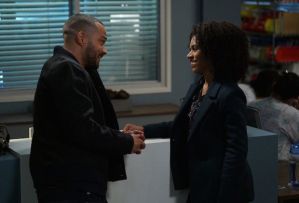 In other plot developments, Grey Sloan’s hacking crisis was resolved not by Jackson’s money or the FBI but by intern Casey, who confessed to Bailey that he’d once broken into the DMV’s computer system when the powers that be dragged their feet about changing the gender on his license. “I’m a proud trans man,” he revealed. Richard conned April into replacing him as overseer of Bailey’s version of the Harper Averys. Amelia dubbed DeLuca her “new Edwards” and also added Sam to Team Shepherd. And, though Jackson and Maggie continued to grow closer — sometimes wearing only towels (while waiting for clean scrubs) — they didn’t end up going out for a drink, since they were interrupted by Clive, the Tinder date she’d forgotten she had.

Now, back to Meredith’s question: What did Jo and Alex do?!? Here with an answer — or at least a reaction — is Camilla Luddington, who plays Wilson.

TVLINE | What did you think when you found out about the hit-and-run?
I was surprised! When I was told that’s how the episode ended, I asked, “Did Alex and Jo do it?” I can’t tell you their response, because that will be in the next episode. But I was shocked! I know I should be used to all of the show’s twists by now, but even I was surprised by that one! 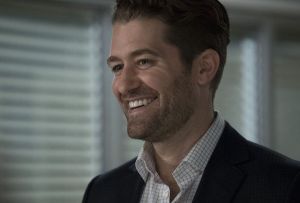 TVLINE | Obviously, you can’t tell me if Jo and/or Alex did it. But did you suspect that she could have?
After reading the script and seeing how much Paul gaslights her through the whole episode, I did wonder whether she felt so desperate in that moment that she thought this was the only way she could protect herself. I know that that’s not what Jo would ever intend to do, but this is Grey’s Anatomy — anything can happen! Characters can do things that, even as the actor playing them, you find completely surprising.

TVLINE | And we do know that, at this point, Jo is beyond prepared to protect herself if she has to — like she did with Jason Myers back in Season 9.
Yes, she has that capacity. She speaks up in the premiere of the season — she felt that was self-defense. So I wondered at the end [of this episode] what happened when Jo and Alex left the hospital. Did Paul do something to her? Did he get so physical with her that she had to take action?

TVLINE | Looking forward, how does Jo handle this situation where now Paul looks like the victim?
The only way I can describe it is that the next episode has a lot of twists and turns. There are moments that are going to be really unexpected.