Picking up right where the midseason finale’s cliffhanger left off, Thursday’s Grey’s Anatomy (8/7c, ABC) finds Jo “in complete shock” at the sight of her abusive husband, her portrayer Camilla Luddington tells TVLine. “She’s suddenly confronting the past and what she’s feared the most… and I think she’s kind of paralyzed. There’s nothing else happening in the world for her except for the fact that she and Paul Stadler are in the same room again, finally. She’s completely horrified and terrified in that moment.”

Once Jo’s initial shock wears off, at least a little, and “it starts to sink in that he’s there,” she worries about how Alex will react to her abuser’s sudden appearance at Grey Sloan. “Alex has commented that he would never do anything to jeopardize anything,” says Luddington, “and she trusts him to make smart decisions. But now, Paul’s sort of in their territory. They’ve been thrown for a loop, so all their plans may go out the window!” 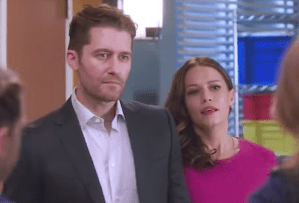 Jo will also be taken aback to learn, as TVLine previously reported, that Paul has a fiancée (Jenny, played by One Tree Hill‘s Bethany Joy Lenz). “That’s another piece of information that completely derails Jo,” says the actress. “She’s wondering, ‘Is this another woman who is experiencing what I have experienced? Is she in trouble? Is she in danger?’ So Jo’s got to grapple with that throughout the episode, and you wind up seeing what happens with regard to Paul’s fiancée.”

For the most part, though, Jo is is just trying to survive. “She’s living minute-to-minute” while Paul’s around, Luddington sums up. “She’s trying to think of how she can get ahead of the situation.”

How do you think/hope/fear the story will play out, Grey’s fans? Hit the comments.