Call it a life-and-death hack. In Grey’s Anatomy’s fall finale Thursday, the hospital’s computer system was hijacked, resulting in problems far bigger than I.T. could solve. How did Bailey manage to keep Grey Sloan running when her team couldn’t so much as get an X-ray taken? Did she keep it running? And what ended up being the cliffhanger that director Kevin McKidd promised? Read on and find out!

‘WHY IS EVERYBODY DYING?!?’ | Early on in “Out of Nowhere,” Meredith was enduring a post-Harper Averys-win interview and lamenting the fact that her newfound fame was cutting into her surgical time; Jo was trying (and, Alex said, failing) to sound like Bailey in a chief-resident practice speech; DeLuca and Sam were doing what apparently they always do; and Carina, Owen and Arizona were “enjoying” an elevator ride that April couldn’t help but label “awkward.” While Ben continued to train to be a firefighter, Bailey asked Richard to run her surgical contest so that she’d have a chance to win it. He agreed to do it on one condition: She reveal the identity of the anonymous donor. “Aretha Franklin,” she lied. In spite of that, he still agreed to do it. As for the intern pairings: Meredith took Levi along as she treated a woman with an enlarged spleen; Jackson and Maggie had Casey on board as they looked after an elderly man; and Taryn rode shotgun as Jo and Alex cared for a kid with what he called “sick-blood disease” and a mom who he admitted was crushing on Karev. And it was all pretty much just another day at the office until computer glitches resulted in every patient in the E.R. giving the impression that they were flatlining. (Hilariously, Sam zapped one poor guy with EKG paddles when he’d only been napping!)

‘ARE WE SUPPOSED TO COMMUNICATE VIA CARRIER PIGEON?’ | After Bailey OK’d Carina to pitch in to help in peds — much to Arizona’s chagrin — technical glitches spread throughout Grey Sloan. No sooner had Robbins advised I.T. guy Tim not to suggest the classic turn it off/turn it on fix than a message popped up on Bailey’s monitor — as well as everyone else’s — stating that “we” were now in control of Grey Sloan, its systems, its records, the works. To regain access, an encryption key was needed. The ransom? Almost 5,000 Bitcoins. If the hospital didn’t pony up, their whole system would be destroyed. When the doctors freaked out on Bailey, she instructed them to keep calm and keep their patients in the dark. Which, of course, was going to be a helluva lot harder once the FBI arrived en masse. The head Fed ordered Bailey to have every computer in the place powered down. In turn, Richard instructed the docs to carry around paper charts and communicate via cell. Like in the Stone Age, April cracked. While Meredith was operating on the spleen lady, a remark of Levi’s regarding computer viruses made her think that hmm, maybe she shouldn’t be using a digital camera in the operation. Nonetheless, she carried on with the procedure without changing her technique. 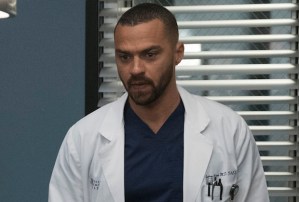 ‘WE’RE NOT GONNA LET YOU PAY THIS’ | While Owen and Dahlia attempted to rush their patient to the head of the looong line for the one working CT scanner, the head Fed off the record admitted that yeah, Grey Sloan’s only chance of getting back up and running was to pay the ransom. Richard was all, “Fine, I’ll write a check”… until he found out that in real money the ransom was actually about $20 million. Normally, a hacker only asks for an amount they think the hacked can pay, the Fed said. It’s because they just announced the contest, Bailey deduced, roping in Jackson to pony up. One problem: The Feds wouldn’t let them pay. If they did, every hospital in the world would find itself in the same situation. When Carina had trouble with a patient who wanted drugs that couldn’t be ordered without a computer, she called in Arizona to try to soothe her. Throughout the crisis, Richard delighted in showing the young whippersnappers how well his old-school techniques still worked. What wasn’t working so well was Levi, who panicked when the lights briefly went out and left the sterile zone when hello, Mer needed the assist (yes, even his). 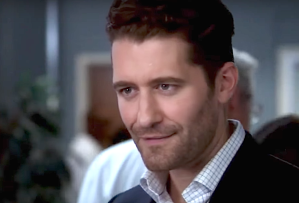 ‘I NEED BLOOD!’ | Trying to get plasma for Mer’s patient, Levi discovered that the code to get into the blood bank had been changed by the hackers. “You’ve got this!” Levi still told Grey in the O.R., as if his reassurance would make any difference. On the plus side, he was the blood type that Mer needed to give her patient. As Carina and Arizona’s patient attempted to leave to go to a hospital that wasn’t celebrating pioneer days, her baby started making her grand entrance. Robbins, by the hardest, calmed the woman enough for her to give birth right there in the hallway. Afterwards, Arizona admitted that she and Carina had made a good team. “I’ve missed you,” they admitted to one another, and Carina clarified that her romps with Owen were just fun. Transferring their elderly patient to another hospital via helicopter, Jackson and Maggie were circling their feelings when the chopper hit turbulence and the old fella’s IV came out, squirting blood all over them. While Bailey decided that, whether it got her arrested, she was phoning “Aretha Franklin” to pay the ransom — too bad Jackson’s cell was blood-spattered on the chopper floor! — Alex and Jo were trying to find the nurse who administered their young patient’s morning meds so they could figure out what they could safely give him to keep him from having another stroke. Along the way, his condition got so much worse that he asked Karev to marry his mom if he died. At last, Jo had just found out what Alex shouldn’t give the boy when Karev was preparing to administer exactly that drug. As she raced back to the kid’s room, she ran smack into — OMG — her abusive ex, Paul (Matthew Morrison)!

So, what did you think of the cliffhanger with Jo, Paul and that poor kid? Did the fall finale compute for you? Grade the episode in the poll below, then hit the comments.