If you’re not very familiar with the 25th Amendment to the United States Constitution, you might want to review this bit from Section 4 — it’ll become very relevant during this week’s Madam Secretary:

And if you didn’t quite follow, don’t worry. Sunday’s episode (10/9c) of the CBS drama will make everything quite clear: The 25th Amendment provides the framework for replacing an incapacitated American president, a scenario with which Elizabeth and Russell potentially face after Dalton starts acting wildly out of character.

“There are some behavioral anomalies that are taking place, and it’s causing some concern among those who have known and worked with him for a long time,” Keith Carradine, who plays the Commander in Chief, tells TVLine.

If you’re wondering, “Well, how outta character are we talking here?,” check out this exchange, which follows Dalton’s making a dramatic — and unvetted — threat against Russia, whom he believes launched a sonic attack on the U.S. Embassy in Bulgaria. (Press PLAY to watch the clip, then scroll down for more.)

“He’s behaving in a way that’s not his usual self, and it does cause some questioning to take place,” Carradine adds.

The atypical behavior quickly becomes a double-edged concern for the secretary of state and the White House chief of staff, who are worried about their friend and duty-bound to uphold the Constitution. 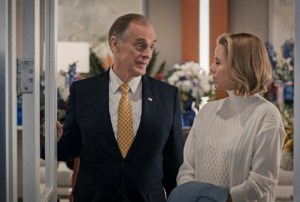 “These people who love him and are friends with him have known him a long time,” series creator Barbara Hall says. “That’s partly why they’re able to spot that he’s acting out of character and that something’s wrong. But they do have to weigh their duties [to the American people] — but they also understand that he’s someone who would want people do weigh their duties.”

She adds: “The man that they knew would want that.”

The Madam Secretary episode, titled “Sound and Fury,” was pitched in October and filmed in November — long before Michael Wolff’s recently published book Fire and Fury kicked up discussion that President Donald Trump might be suffering mental difficulties, something Trump has vehemently denied in a tweet. The CBS series’ prescience when it comes to anticipating national and international incidents has become something of an inside joke among its cast and crew; star Tim Daly once joked to TVLine that “Sometimes people will say to me we’re ripped from the headlines, which is actually not true. The headlines are ripped from our show.”

“I stand in awe, repeatedly, as to how brilliantly they anticipated the human condition,” Carradine says, pointing out that the series is “aspirational” and therefore unconnected to anything actually taking place at 1600 Pennsylvania Ave. “So here we have a chance to show, yet again on our little show, how a situation might be dealt with if there was a question about the health of our Commander in Chief.”

He chuckles. ” I think it’s a wonderful hypothetical.”