“How stupid am I?” Olivia wonders in Law & Order: SVU‘s winter premiere, and while it’s never a good idea to blame the victim, maybe letting your adopted son’s biological grandmother into your trusted inner circle wasn’t the smartest move? 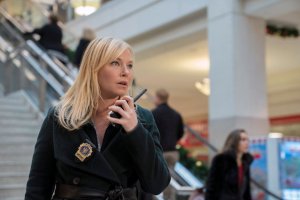 The episode, which aired Wednesday, picked up immediately after the events of the fall finale: Noah went missing while winter-coat shopping with Sheila Porter, and Liv got the call she always feared. A distraught Benson and the team immediately sprung into action, searching the mall and its surroundings with the full force of the NYPD, despite Chief Dodds’ insistence that Olivia step down from the case.

The SVU squad went about its usual investigation while Olivia just tried to keep it together, ultimately breaking down with Sheila at her apartment. But when Carisi traced the car seat the kidnapper used — and realized that Sheila bought it a few days earlier — Olivia realized exactly what happened. But it was too late: Sheila was gone. 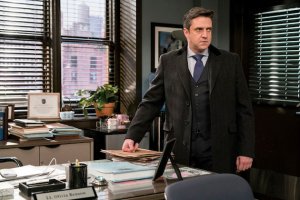 “I just want my son,” Liv cried to Barba, collapsing into his arms as she processed what had happened.

Through the usual twisty action, some of which included Rollins torturing the kidnapper (who was Sheila’s gardener) by threatening his teenage daughter, she and Carisi thought they’d find Noah at the gardener’s cabin. But Liv realized that Sheila had probably gone to another hideaway, and when she showed up, Sheila hit her over the head with what looked like a fireplace poker.

“You were coming to take my baby,” a crazed Sheila said, pointing Benson’s gun at her. “He is my blood, he is my family. He will never be a part of you the way he is a part of me.”

Liv desperately tried to talk her down. “Blood isn’t the only thing that makes families, Sheila. Legally, Noah is my son,” she said. “Have you thought about what this will do to him?”

There was a lot of crazy talk about how Olivia can just adopt another kid, and how Olivia works too much, and then Noah came out to say hi to his mom, triggering what ended up in a tussle that wound up with Sheila sobbing in Olivia’s arms.

Sheila apologized to Olivia before she was loaded into a cop car and carted away. And when Noah asked about what the heck had just happened, Olivia told him that “Grandma Sheila is a good person who did a really bad thing” and then promised him pancakes on the ride home.

At the end of the episode, Barba stopped by Liv’s place to see how she was doing, and joined a hangout with Rollins and her daughter, Fin and Carisi. See, Grandma Insane-o, blood really isn’t the only thing that makes families!

Did you see the Sheila-kidnapping reveal coming a mile away? Hit the comments and let us know.