Silly Olivia. You thought you could be happy without something in your personal life going catastrophically wrong?

This week’s episode, Law & Order: SVU‘s fall finale, once more whacks Sgt. Benson in the heart by having her son, Noah, go missing at the end of the hour. Even worse: He’s with his biological grandmother when the kidnapping happens.

On a happier note, it looks like Carisi and Rollins may soon be a couple. Rolrisi? Carollins? While you’re pondering their couple name, we’ll review the highlights of “Intent.”

GONE FISHIN’ | The case of the week involves Katy, a social media star known for posting photos of her scantily clad body on Instagram and the like. When we meet her, she’s about to go on her first date with an MMA fighter called Andy “The Monster” O’Connell. To tease her followers, she posts a photo of his hand and hers toasting with Champagne, then tags it #WhoIsTheHand. (I see what you did there, SVU.) But the fun stops when they go inside and he gets really aggressive, really quickly. Though Katy repeatedly cries for Andy to stop, he pins her down and rapes her.

Disheveled and in shock on the street later, Katy tells a passerby that she’s been violated. But by the time Rollins and Fin show up at the hospital, Katy claims nothing happened. A visit from Rollins and Benson later on doesn’t change her mind, but Katy starts to look shady when Andy calls the police saying that his date is blackmailing him: “Pay me $10,000,” she says via text, “or I’ll tell the cops you raped me.”

Andy maintains that he did have forceful sex with Katy, but only because she’d texted him her rape fantasies ahead of the date. And when the texts on his phone and her phone don’t match up, Benson & Co. realize that they’re facing a double catfish. 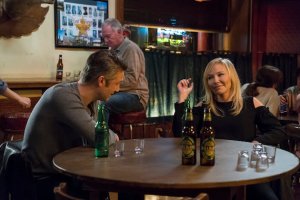 THIRD PARTY FOUL | But in order to go after the person messing with both Katy and Andy, Andy has to confess to the crime. (It’s a whole legal thing that, to be honest, I don’t really understand. But it’s not super important, so let’s just skip it. Cool?) Andy genuinely feels bad about what’s happened, so he does the right thing and confesses so the cops can bring the catfisher to justice.

That person is a woman named Heather living in West Virginia, and she puts up no fight when Rollins and Carisi drive south to arrest her. In fact, she’s kind of excited about the chance to go to New York City and come face to face with both Katy and Andy. (As you might’ve inferred, Heather is not quite all there.)

The night before they drive back, while Heather is being held by local authorities, the Manhattan cops go out for drinks and wind up getting into a bar fight. A little tipsy and high from the fisticuffs, they return to their motel, where a slightly sloppy Carisi starts talking about how much he enjoys Rollins having his back. They get closer, and he leans in for a kiss, but she backs up and it’s super weird as they say their hasty goodnights. And when Carisi sees the flirty bartender leaving Rollins’ room the next morning, he’s completely ticked off and angrily awkward in the car with her.

GRANDMA OVERSTEPS | Meanwhile, back in New York, Grandma Sheila’s role in Noah’s life seems to be going well. Olivia is happy that Ellie’s mom seems to care so much about her grandson… but when Liv finds out that Sheila has been mentioning her dead daughter to Noah, Benson isn’t having it. “I wasn’t thinking. I’m very sorry,” Sheila immediately apologizes, ashamed. But Olivia sees that Sheila meant no harm and graciously forgives her, saying, “We’re both new at this.” And when Sheila asks if she can buy Noah a new winter coat, Liv gives her instant approval.

ALMOST KISS AND MAKE UP | When Rollins has had enough of Carisi’s pissiness, she confronts him in the squad room, saying that she didn’t do anything wrong. And then the way she teases him about being a “pain in the a–” makes it clear — to us and to him — that there may be some bow-chicka-wow-wow for them in the near future. Thoughts on this pairing, SVU faithful?

LIVE BY THE INSTAGRAM, DIE BY THE INSTAGRAM | In court, Heather’s lawyer paints a picture of his client as a lonely young woman saddled with being the sole caretaker of her terminally ill, elderly mother. And Barba is pretty sure he’s going to lose because of it… until he unearths some incriminating evidence from Heather’s social media past. Using past posts, he proves that she’s vindictive and jealous of Katy, and that she meant to harm the influencer via Andy. “It’s not fair!” Heather yells on the stand, breaking under Barba’s questioning. “She deserves what she got.” And then it’s only a matter of time before the jury finds Heather guilty of rape in the first degree. In the gallery, Katy and Andy exchange a look that pretty much says, “Well, this is the best we could’ve hoped for.” Oh, but Katy’s look also says, “… but I was still raped.” 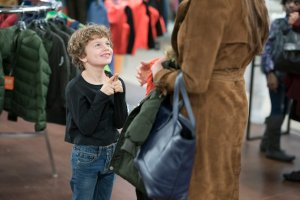 WHERE’S NOAH? | At a department store, Sheila is helping Noah pick out a coat. But when she turns her back, someone (whose face we don’t see) who’s been watching the boy appears to nab him. When Sheila looks around for her grandson, he’s gone. And the episode ends with Olivia getting the bad news via Sheila’s call.